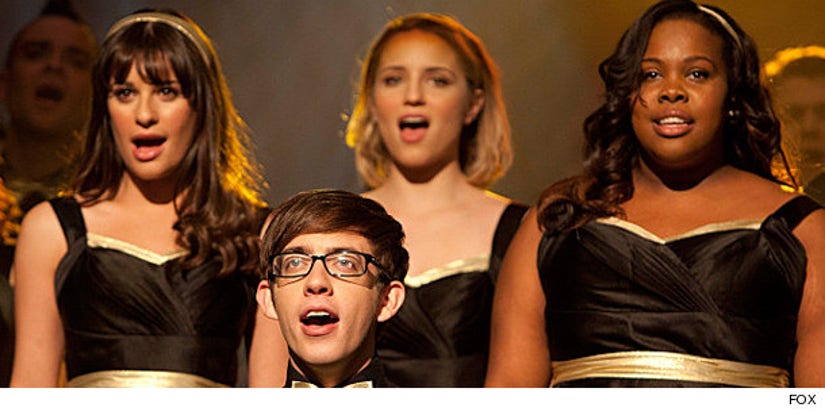 Get ready to gleek out.

The Nationals episode of "Glee" is being taped at Cal State Los Angeles today, and we have exclusive details from the scene, including the set lists for New Directions and Vocal Adrenaline.

Warning, there are major spoilers below.

Our sources, who attended the taping, revealed that the McKinley High singers will perform three songs: Lady Gaga's "Edge of Glory," Celine Dion's "It's All Coming Back To Me Now" and Meat Loaf's "Paradise By the Dashboard Light."

All of the "Glee" regulars, as well as Rory (Damian McGinty), Joe (Samuel Larsen) and Sam (Chord Overstreet) perform. And we hear that Quinn (Dianna Agron) will be back on her feet dancing!

Wade (Alex Newell) returns to lead that squad, and he sings his performances in drag.

The judges at nationals are Perez Hilton, Rex Lee and Lindsay Lohan. Perez and Rex were filmed during the awards ceremony, but Lindsay was noticeably absent. As of publishing time, they're only halfway through their shooting day, so Lindsay may be shooting her scenes later.

TMZ reports that she shot most of her dialogue the other day, and that all she has to shoot today are reaction shots.

As for the winner of Nationals, two different endings were shot. Guess you'll have to tune in to see who claims the title.