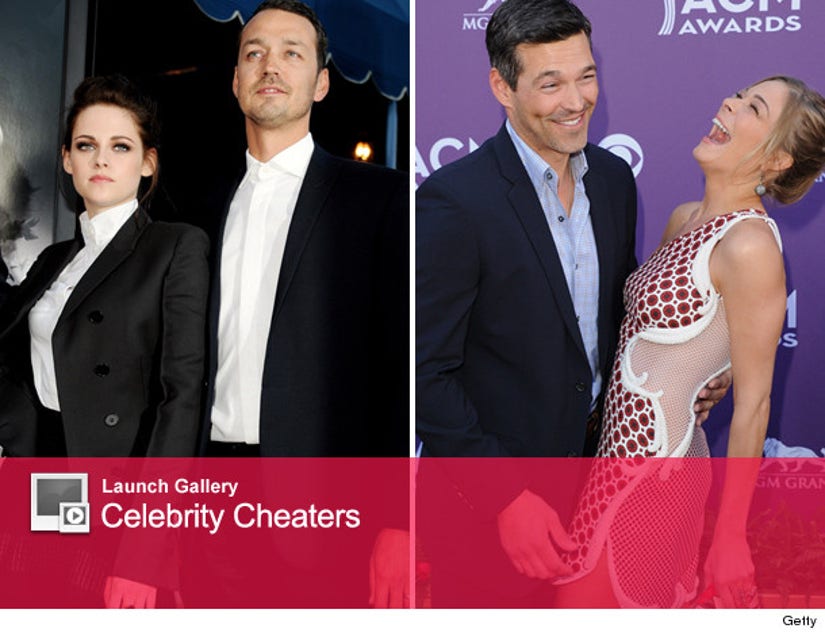 Sadly, it seems cheating isn't all that uncommon in relationships these days, especially when it comes to celebrities.

Kristen Stewart getting busted stepping out on Robert Pattinson with married director Rupert Sanders was still shocking -- especially because both parties immediately admitted their indiscretions and issued apologies for their actions.

But these two were definitely not the first famous people to hook up with others while still in a relationship.

During his 25-year marriage to Maria Shriver, Arnold Schwarzenegger fathered a child with a woman who worked in their home. That child was born just 5 days after Shriver gave birth to the couple's son, Christopher. Ew.

LeAnn Rimes and Eddie Cibrian carried on an affair while both were married -- to other people! They each got divorced then married each other, with Rimes later saying, "I take responsibility for everything I've done. I hate that people got hurt...But I don't regret the outcome."

And don't even get us started on Angelina Jolie. Yes, we all know that she and Brad Pitt merely "fell in love" on the set of "Mr. and Mrs. Smith," while he was still married to Jennifer Aniston -- but did you know she also allegedly broke up Billy Bob Thornton's engagement to Laura Dern?

As Dern was quoted, "I left our home to go and make a movie, and while I was away my boyfriend got married, and I never heard from him again." Thornton denies the claim.