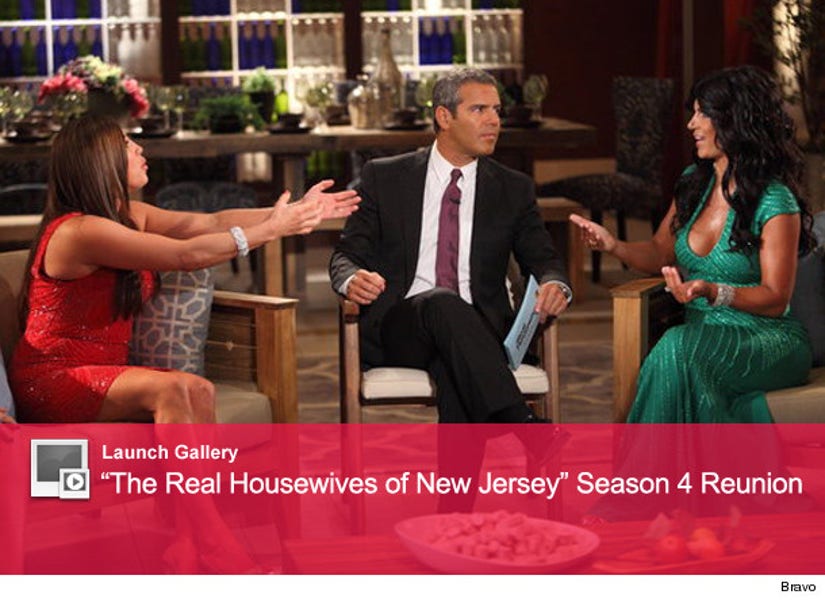 Sounds more like an episode of "The Sopranos" than "The Real Housewives of New Jersey." Part one of the three-part (!) reunion aired last night, and the fur really flew.

It was the first time all five housewives -- Caroline Manzo, Jacqueline Laurita, Teresa Giudice, Melissa Gorga and Kathy Wakile -- were in the same room since the now infamous Posche Fashion Show. After a year of not speaking to each other, the wives had a lot to say, especially former BFFs Jacqueline and Teresa. Check out the 5 cant-miss moments from the show:

1. Kathy shows off her new face!

Kathy copped to having a nose job and her lips filled since filming ended. All of the housewives have had cosmetic surgery; during the reunion Caroline revealed she had a tummy tuck, Jacqueline has admitted getting fillers and both Teresa and Melissa have boob jobs. Check out Kathy's results below:

During what was perhaps the most emotional segment of the reunion, Jacqueline broke down in tears after a montage of her son Nicholas was shown. Nicholas has autism and regressed to a point where he no longer says "I love you" to his mom. His aunt Caroline also teared up.

3. Jacqueline tells Teresa she is going to hell

Jacqueline says Teresa had been trying to expose Melissa as a stripper as far back as the beginning of Season 3. When Teresa denies the claims, Jacqueline goes off.

After Teresa criticizes Caroline's weight, Caroline's daughter Lauren Manzo (who recently underwent Lap Band surgery) defends her mom. Lauren infers Teresa isn't smart enough to write her own blog posts, and tests that theory by asking her to spell and define napalm (a word used in one of her blogs) ... with hilarious results.

More accusations of lying are thrown at Teresa, this time by her cousin Kathy. Things get ugly when Kathy says Teresa's mom (her aunt) is a liar too. When Teresa brings up Kathy's late father, Kathy's sister Rosie Pierri -- who is waiting backstage -- goes ballistic and threatens to kill her cousin.

During the "Watch What Happens Live" aftershow, host Andy Cohen admitted this was the most uncomfortable portion of the show.

Next week, Rosie confronts Teresa, and Teresa's husband Joe Giudice is questioned about his fidelity. What was your favorite moment from the show? Tell toofab in the comments below!