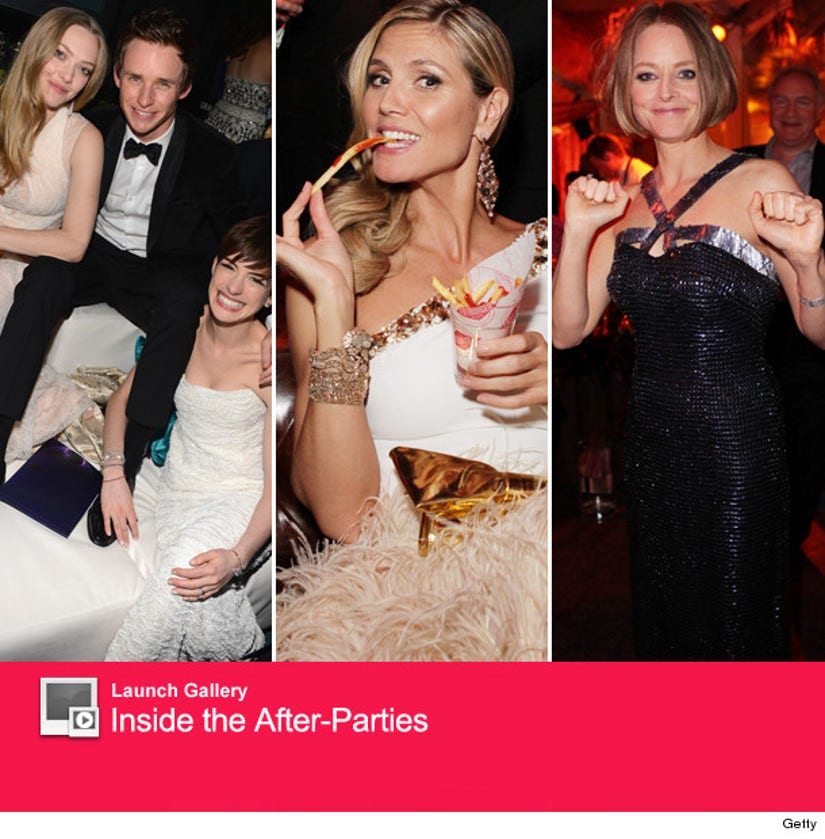 After the show, it's the after-party!

The fun wasn't over when the Golden Globe Awards wrapped up last night on NBC -- and stars of TV and film flocked to bashes all over town, trophies in hand.

The Weinstein Company drew the biggest A-list crowd, with the entire cast of "Django Unchained" celebrating the wins of Quentin Tarantino and Christoph Waltz.

Leonardo DiCaprio, Jamie Foxx, Kerry Washington were seen partying alongside Kristen Wiig, Jennifer Lopez, Bradley Cooper and Heidi Klum, who got on a table to dance!

Jodie Foster was also seen busting a move at the party -- she's single and ready to mingle!

It was also a girls night out for Selena Gomez, who was spotted spending the night with gal pals Vanessa Hudgens, Ashley Tisdale and Sarah Hyland. Josh Hutcherson was seen mingling with them as well.

Over at the Warner Bros. and InStyle party, Ben Affleck celebrated his big night with wife Jennifer Garner and brother Casey Affleck.

The party was also attended by Miranda Kerr, who looked AMAZING in a sexy red gown. She was joined by husband Orlando Bloom, putting those split rumors to rest.

And over at NBC Universal's party, the cast of "Les Miserables" was seen relaxing after their victorious eventing. Anne Hathaway, Amanda Seyfried, Eddie Redmayne and Hugh Jackman were all in attendance.

Check out all the party pics above -- and see how some of the stars switched up their looks for the bashes!