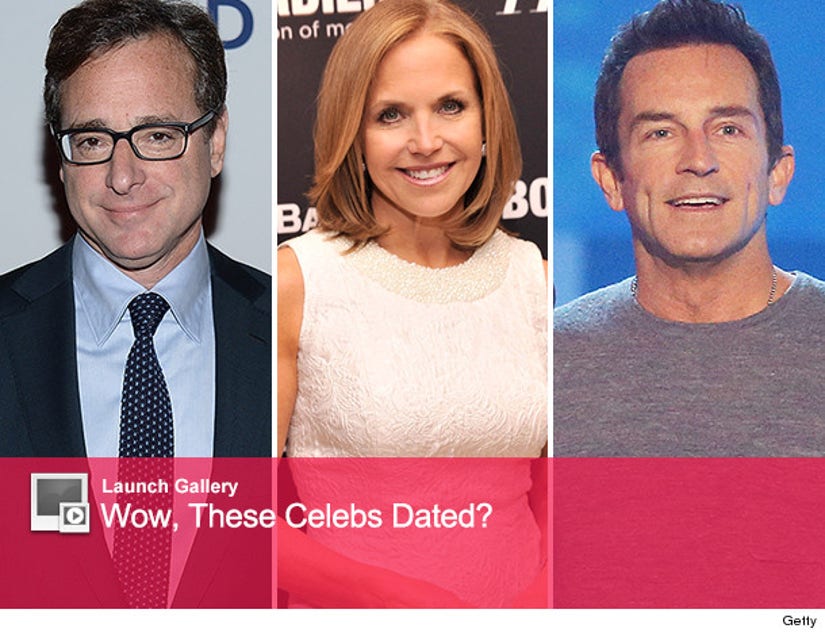 On Wednesday, the journalist shared some of her lesser-known past relationships on the Howard Stern radio show -- and some of them are pretty surprising.

Did you know Katie and Bob Saget shared a "fun" date? The blonde beauty and comedian only went out one time ... Saget never called after.

That's not the only surprising celeb who tried to woo the TV star -- "Survivor Host" Jeff Probst also asked Couric out too.

"I went out with Jeff Probst once too," she told Howard. "I think he had puka shells on -- that was kind of a weird thing."

But Jeff never called Katie for a second date either.

"I can't say that I was devastated that neither called me back," she confided. "I thought they were both nice guys . . . I don't think there was real magic there with either [of them], but I enjoyed spending time with them," she confessed to a stunned Stern.

And the real shocker -- the late king of pop himself, Michael Jackson, tried to land a date with Couric!

Micheal asked their mutual friend/spiritual consultant Rabbi Shmuley to plant the seed with Katie -- which caught the "Today Show" host off-guard at the time.

"[He said] Katie, I have a question for you, are you seeing anyone?' And I thought, this is so beyond creepy that Rabbi Shmuley is hitting on me. I'm like 'Rabbi Shmuley, you have like nine kids, what's going on here?' I said 'Actually, I am [seeing someone].' Because I had a boyfriend at the time."

She continued, "He said, 'Oh, that's a shame . . . Michael [Jackson] said to me 'That's the kind of girl I would like to go out with . . .' and I said, 'Rabbi Shmuley, that's very flattering but I am seeing someone . . . will you tell him how flattered I am and what a nice compliment that is?'"

While MJ and Katie sound like a pretty odd pairing -- Couric believes that Michael was probably just looking to for something more normal at the time.

"Not to be too psychoanalytical about it, but I think he was looking for a little normalcy possibly, and maybe he saw me as kind of a normal person," she suggested. "I do regret not having dinner with him. That would have been insane -- breaking bread with Michael Jackson!"

Now wouldn't that have been the most awesome, yet bizarre couple that ever existed? Click "Launch Gallery" above to see more surprising couples!