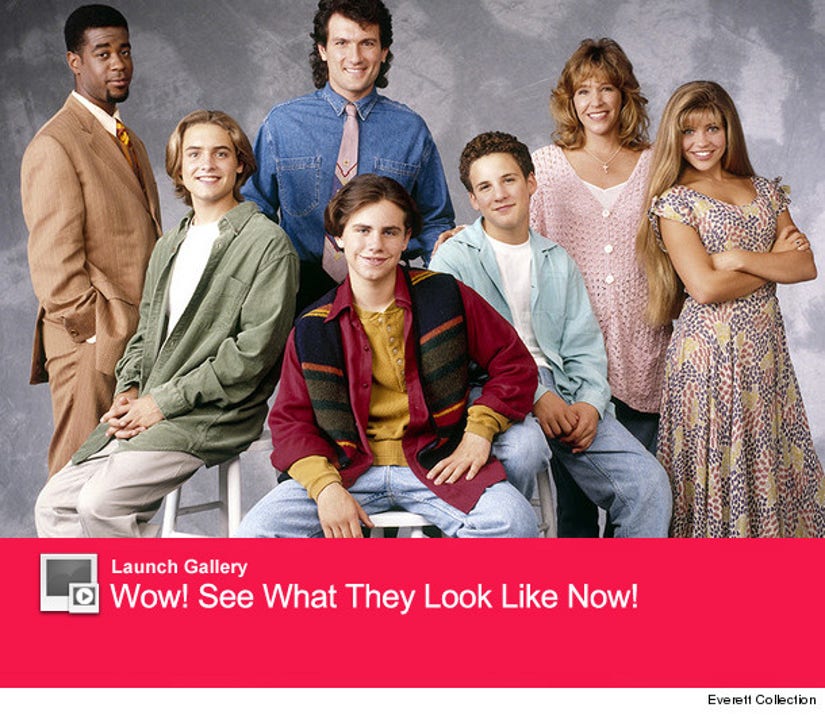 Note: This article was originally posted in June 2013, when the cast reunited at the Austin Television Festival. To celebrate the debut of "Girl Meets World" tonight on Disney, check out our Now & Then gallery above -- and keep reading to see 15 Facts You Probably Never Knew about "Boy Meets World."

The cast of "Boy Meets World" got back together on Friday for the first official reunion since the show went off the air in 2000 -- and they revealed a ton of secrets we never knew about the long-running TGIF staple.

From a Q&A with fans, one-on-one interviews on the opening night red carpet and a press conference with the cast, toofab has put together some surprising facts about the show.

Ben and Cory's first kisses were at the same time. The young actor had never locked lips with a girl before his smooch with Topanga (Danielle Fishel) -- and was so nervous before shooting it, he asked, "Can I die from this?"

The kids on set thought that William Daniels was from across the pond. In reality, the Brooklyn-born actor just has really great diction.

3.) Morgan #1 has had a very interesting life

After the first two seasons of the show, Nicksay was replaced by an older actress. But she's been a busy girl since leaving the show. Lily told us she went to high school in the Scottish highlands, sailed around Europe, lived with the Karen tribe in Thailand for a month and studied Ancient Greek and Latin at St. Andrew's. Impressive!

Danielle didn't have it as easy as Rider. She revealed (via video message) that another actress was initially cast in the role. When that didn't work out, Fishel was brought in -- but she thought she'd get canned too.

"At the end [of the first run-through], Michael said "I have so many notes for you I'm going to do you last and let everybody else go home." After some coaching, a calm and collected Topanga emerged -- and the next day, Michael's only comments came in the form of a standing ovation.

Fishel also talked about a scary accident that happened on the way to set one day, an accident that left her car totaled after she hydroplaned during El Nino.

"I had hazard lights on, nobody stopped except one person, like an angel out of nowhere," she explained. "This car pulls up next to me and rolls down the window ... and it was Jared Leto."

After he made sure she was O.K., he drove off. "I thought Jordan Catalano/Jared Leto might be an angel," she says.

"I did [get some negative feedback], but I also learned not to play into that," Trina revealed. "The world today is a little bit meaner than it was when 'Boy Meets World' was playing. Now I hear a lot of strange comments but I feel sorry for those people."

"Rider came to me and said 'I have to quit,'" Jacobs said about an interesting meeting around the show's fifth season. After saying he wanted to go to college, Michael told him "What makes you think we can't work out a schedule where you can go to college and do the show?"

They worked it out and the show continued for another two years.

9.) Danielle was fine with her "Felicity" moment

"I talked to Danielle and said one of the things we're thinking about doing is cutting your hair," he says. "She said 'Get me the scissors.'"

Watch her do it below:

10.) The cast members are a bunch of thieves

"I was looking through my closet the other day and I found these really nice black leather shoes and on the bottom it said 'Cory,'" said Ben. "13 years later, I still have those shoes, sorry!!

"I took the leather jacket with me to New York and then it got stolen out of my garage in Brooklyn," he says. "Some hipster in Brooklyn stole it!"

Maitland met Michael Jacobs when she auditioned for one of his other shows: "Zoe, Duncan, Jack and Jane." While he didn't think she was right for that show, he cast her on "Boy Meets World" instead.

"They baked us cookies every week and they'd say 'From The Stalkers," says Rider. "They were great."

The family attended every taping and didn't mind the nickname. "They liked it," says Ben. "They were very dedicated fanatics."

13.) Brittany Murphy made a lasting impression

She only appeared on 2 episodes of the show, but Rider clearly loved having her around.

"She was so quirky and different and it was really tragic when I found out she had died," he says. "I was not surprised to see her instantly achieve huge success after our show, she always had real crazy cool quality to her."

"The first, 3-4 episodes, there's always another kid with us," says Rider. "We had a chair that we called "The Death Chair," because whoever sat in it wouldn't be back the next week."

Eventually, they gave up on the other character and gave all his lines to Rider.

15.) Those tears during the finale are real

"We did that last scene in one take because we were such a wreck," Rider say of filming the series finale. "It was 7 years, like high school and college all rolled into one saying goodbye to each other."

Danielle Fishel's goodbye to Mr. Feeny was so touching, they didn't want to re-shoot it -- even though the actress' real-life tattoo was showing on the back of her neck!

Unfortunately, the clip has been pulled from YouTube. So go ahead and rent it on Netlix!