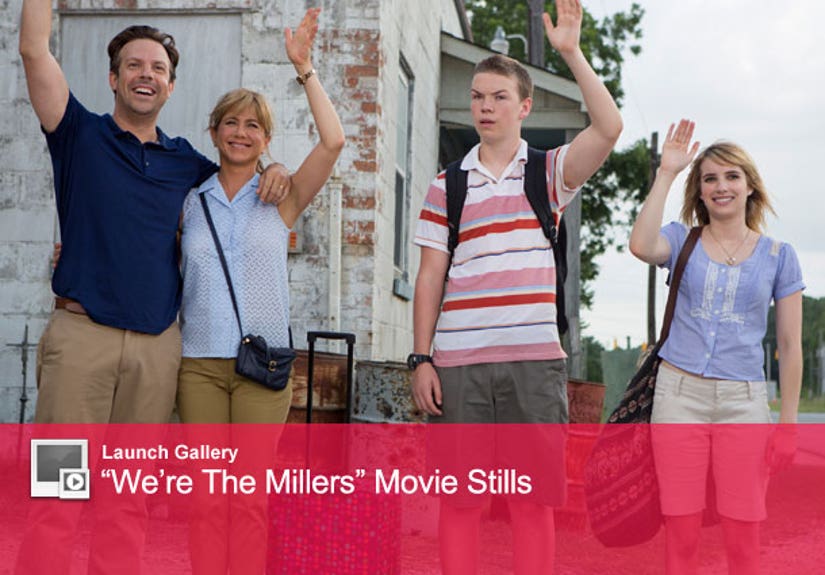 "We're The Millers" is a family comedy, but not one you'd take the family to see.

The raucous -- at times raunchy -- film is a R-rated road trip that relies on every sex joke in the book. There are plenty of laughs, but they're derived more from shock than humor.

Jason Sudeikis stars as David Clark, a small-time drug dealer who runs into a big problem when his stash and cash get stolen by street punks.

He enlists the help of his abandoned neighbor Kenny (Will Poulter), a homeless girl Casey (Emma Roberts) and a down-on-her-luck stripper Rose (Jennifer Aniston) to make some quick cash. Their plan is to pose as the Millers, a family vacationing in Mexico. Their true objective is to traffic marijuana across the border in their RV. Of course, nothing goes as planned, and the Millers find themselves in dicey, if not outright disturbing, situations (including one graphic scene where Kenny is bitten by a spider in the crotch).

The plot and acting won't win any accolades(and neither will Aniston's stripping, apparently), but they're not the point. "We're The Millers" is "National Lampoon's Family Vacation" for the 21st century crowd: crude, crass, and crammed full of OMG moments for a desensitized audience.

In that respect, the film succeeds. Poulter and Nick Offerman (who plays fellow vacationer Don Fitzgerald) are particularly fun/painful to watch. There's a likeability to the Millers and Fitzgeralds, with perhaps the exception of Roberts' undeveloped character Casey.

If you're looking for lowbrow laughs (and really, who isn't these days?), "We're The Millers' delivers them all the way through the post-movie bloopers.