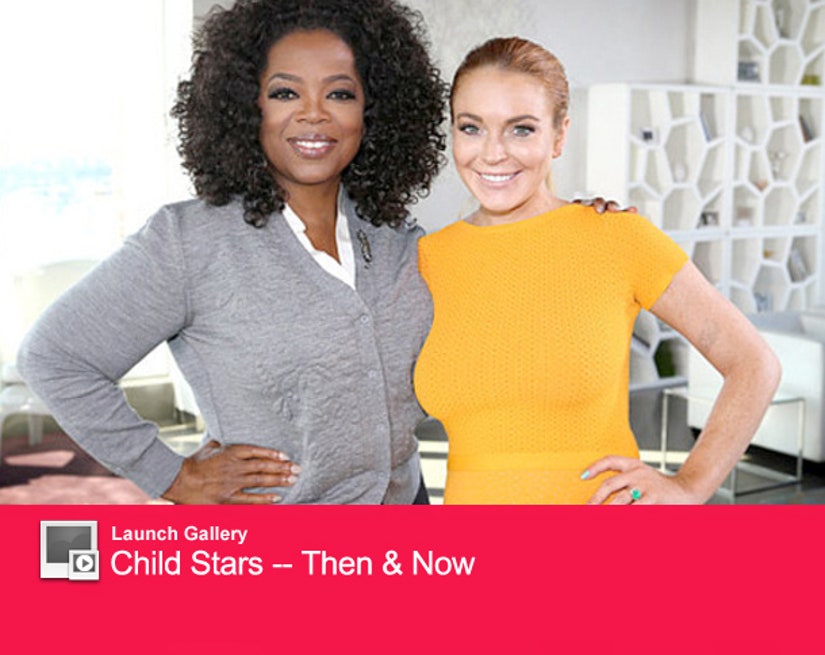 Lindsay Lohan's big interview with Oprah Winfrey aired Sunday night on OWN -- where she was really candid about all six trips to rehab, her addictions and opened up about her chaotic family.

It was definitely a revealing hour of television. Check out the 5 biggest takeaways from LiLo on "Oprah's Next Chapter" below.

"Alcohol. That in the past was a gateway to other things for me," Lindsay revealed. And while in the previous interviews, she said she's only done cocaine 3-4 times, she admits she lied to save face.

"I really haven't done it more than 10-15 times, of course I said 3-4 because I was terrified of being judged," she says. "I never felt good the next day. It's a party thing, people would have it and I'd do it. It went hand in hand with drinking."

Lindsay says she's also done using Adderal -- and, for her, "that's a big deal." She adds, "I was convinced that it did ground me, but I notice how calm I am now [without it]."

The only drug she says she's on now: Nexium, for acid reflux.

2.) Lindsay Has Quite the Rehab History

Lohan reveals she first went to Wonderland for treatment back in 2007 on her own free will. "I wanted to go there," she says. "I tried Ambien at the time and it was really scary. It wasn't an addiction, it was just a scare. I had taken it for about a month at the time and I didn't know the side effects."

She then went to Promises after her first DUI in 2007, only to end up at Cirque Lodge later that year after her second DUI. "I didn't take Promises seriously," she admits. "I just turned 21, I wanted to have fun. I did the same thing again, it's like the definition of insanity."

As for why this latest trip to Cliffside was different, she says "The other times it tended to be a punishment. I don't think in the past I fully surrendered to the fact that I need to shut up and listen. In this case, I wasn't fighting at all."

3.) She Doesn't Blame Her Parents

While Dina and Michael Lohan always get a really bad rap in the press, Lohan says she doesn't think they've ever exploited her.

"Nobody's perfect. I love my parents," she says ... adding, "I'm not going to say that certain situations I would have preferred to be handled differently, to be kept within the family and private."

Lindsay insists her parents do get along, despite a few very public feuds -- and says she's talked to them since getting out of rehab about trying to keep things more private.

And while some would push the blame onto her troubled family life, Lindsay isn't.

4.) She Made (and Wasted) A LOT of Money as a Teenager

Lindsay says she pulled in $7 million for "Just My Luck" -- but then "wasted so much money."

Where'd it all go? "I was living in a hotel and I had an apartment. I wasn't really being guided," she says -- adding that she'd fly friends out to visit her and didn't listen to her family when they wanted her to move back to New York.

"I didn't pay close enough attention to what was going on," says Lindsay. "People around for the wrong reasons."

5.) She Knows She's Been VERY Lucky

"Thank God, I have some serious guardian angels because I would never had been able to forgive myself if I hurt someone else," she says of her past mistakes.

She says she's learned from her troubled history and is ready to change people's perspective of her.

"As long as I stay honest with myself and just do the work that I'm willing to do and have been doing, then there's nothing that can stand in my way. I'm my own worst enemy and I know that.

All that being said, we're still rooting for her. Are you? Let us know what you thought about the interview in the comments below!