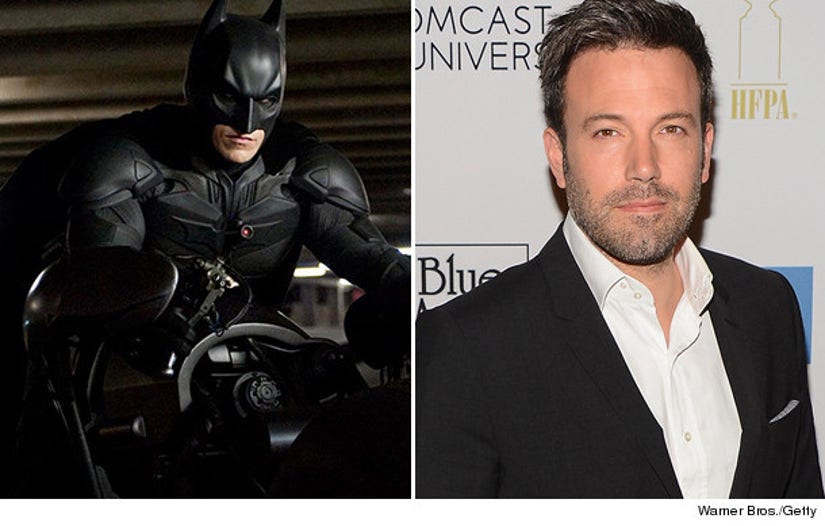 The Internet exploded last night when it was officially announced that Ben Affleck will play Batman in the upcoming "Man of Steel" sequel.

And the reaction so far hasn't been that positive.

With #BetterBatmanThanBenAffleck trending on Twitter, petitions and memes showing him in costume with BFF Matt Damon as Robin, a lot of fans are seeing the announcement as a joke.

Of course, both Heath Ledger and Anne Hathaway were initially met with criticism when they were cast as The Joker and Catwoman -- and both ended up stealing every scene from Christian Bale.

And Warner Bros. got a ton of complaints about Michael Keaton when he was first cast in Tim Burton's now beloved films.

In short, we think it's a little premature to judge.

Since the news broke, even Hollywood stars have turned to Twitter to react -- with varying results.

See who dissed Ben below ... and who supports the decision. Which side are you on?

You read for a part, you feel good about it, you feel confident, then they cast Ben Affleck.

Everyone hating on Ben Affleck for batman? I LOVE IT. You get it Ben. Let me get my Alias on with your wife! 💋✌

Woah Ben affleck as batman... I kind of back him as an older batman- guess well see... Did not see this coming.

After hearing Ben Affleck is gonna be batman, I say why not Nick Cage? -Z #nickcage4batman #BetterBatmanThanBenAffleck

I like it! @BenAffleck as #Batman good for Ben! Super Hero's Rock!

Hey guys, thanks for all the support for the caped crusader casting. Not to be this time, but hats off to @BenAffleck , and good luck!

Ben Affleck is the new Batman? I absolutely didn't see it coming but I do absolutely see it working. Gotta be better than Daredevil amirite?

OOOOOOOOOOOOH Matt Damon as the new joker? waddya think of them apples?

Really looking forward to seeing Affleck bring the depth and gravitas to Batman that he brought to Daredevil and Gigli.

WOW, @BenAffleck is gonna play Batman. I hope he fights the Joke-ah! #wickedpissah

Affleck directing Batman? Could be cool. He's really finding himself as a director... Wha? Playing Batman? Eeeep!!-- A guy who saw Daredevil

Affleck is going to kill this. Mark my words. As a huge fan of Bale, I completely think this is a genius new way to take it.

And then there was Affleck's good buddy Kevin Smith, who tweeted:

Which side are you on?