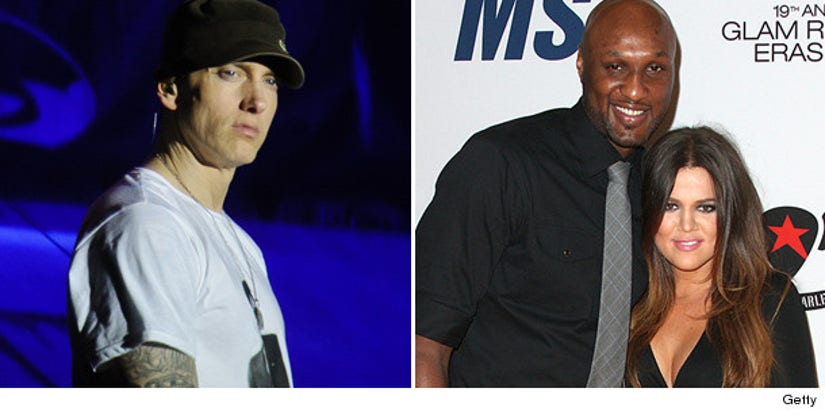 The real Slim Shady is back with a new song and new victims!

On Monday, Eminem released the audio for his latest single "Berzerk" -- and he's throwin' shade at some of today's biggest tabloid fixtures.

The song, which mixes hooks from the Beastie Boys' "Fight For Your Right (To Party)" and samples of Billy Squier's "The Stroke," features some pretty cruel digs at Khloe Kardashian, Lamar Odom and Kevin Federline.

"All I know is I fell asleep and woke up in that Monte Carlo with the ugly Kardashian ... Lamar, oh sorry yo, we done both set the bar low," he raps in an apparent dig at Khloe.

He also calls out Federline for having five kids with three baby mamas -- rapping "So baby make just like K-Fed and let yourself go, let yourself go."

On Sunday, Eminem announced the release date for his new album "MMLP2" (November 5) in a commercial that aired during the MTV Video Music Awards.

What do you think of Eminem's new single? Tell toofab in the comment section below!