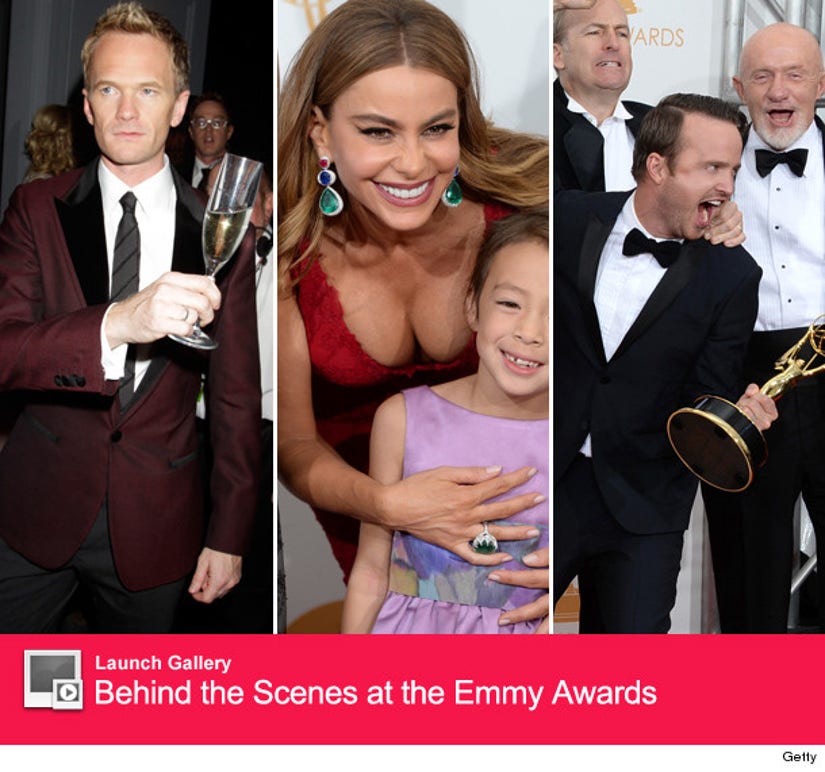 It was a night of booze, boobs and "Breaking Bad" at the Emmy Awards last night -- and a lot of the best action went down when the TV cameras weren't rolling.

The champagne was flowing freely backstage, as stars like Neil Patrick Harris and "Modern Family" duo Ty Burrell and Julie Bowen were photographed holding onto some half-empty flutes.

The winning celebs looked happier than ever as they clutched onto their brand new trophies too -- as Derek Hough (Yes, Derek Hough is an Emmy winner now), Anna Gunn, Jeff Daniels and Tony Hale showed off some of the biggest smiles we've ever seen.

But there was no cast ready to celebrate more than "Breaking Bad" -- who posed for some of the BEST photos ever after winning Outstanding Drama Series during the ceremony. They just look so excited!

Want more behind-the-scenes secrets? Here are some other great tidbits from the press room backstage:

- After winning for Outstanding Writing in a Comedy Seires for "30 Rock," Tina Fey used the off-stage microphone to thank the Pope for "just being cool about some stuff."

- Claire Danes isn't putting her trophy anywhere near her 9-month-old son. "I'm just hoping he's not going to impale himself on this thing," she said. "I'm going to keep it very elevated at a place that he can't injure himself."

- Jon Hamm and Amy Poehler hosted a losers party at the Soho house, where losers were allowed in for free but winners have to pay. "If you go to the losers party you have to give like 1,000 dollars so I'll do that," trophy-holder Bobby Cannavale revealed. All donations go to World Wide Orphans.

- Derek Hough was SUPER excited about his Emmy win and showed off some tricks in the photo room backstage. See the photos above!

- Jeff Daniels is following up his classy win for "The Newsroom" with a total role reversal. "We're going to party 'til dawn and then I'm going to get on a plane and go to Atlanta and start shooting 'Dumb and Dumber To,'" explained the actor. "The intellectual free-fall from [Will] MacAvoy to Harry Dunn, imagine if you will."

- After mentioning his son Cameron in his acceptance speech, Michael Douglas explained the situation further backstage. "My son is in federal prison," he told reporters. “He's been a drug addict for a large part of his life."

After explaining that Cameron is in solitary confinement, Douglas added "I was certainly disappointed in my son. But I've reached a point now where I'm very disappointed with the system."

- And Jim Parsons followed up his win by going to the most exclusive joint in town: His bed. "I prefer to read in bed, but that's because I'm 100," he said. "I might go home and say hello to the dogs and that might feel like a hell of a celebration, I don't know."

Check out all the behind-the-scenes shots above!