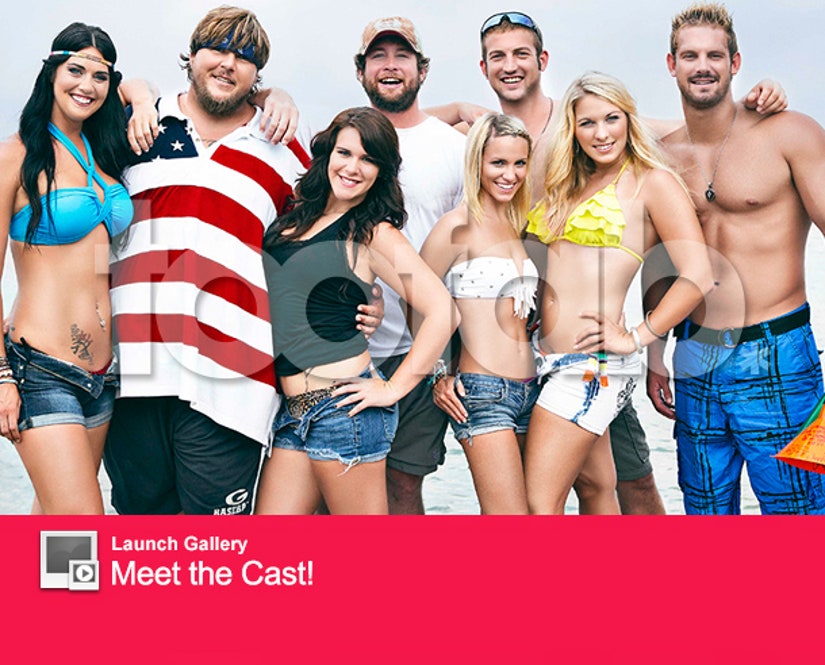 Study these faces, because they could become the next Snooki, Situation and JWoww.

495 Productions and SallyAnn Salsano, the brains behind "Jersey Shore," are bringing their winning formula to CMT for a new series called "Party Down South" -- and toofab has the exclusive first look at the cast!

And with the stars' ages ranging from 21-33, it should be a very interesting mix. We can't wait to see what kind of trouble they all get into!

Check out the cast bios, left to right, below -- plus, see more photos in the gallery above.

Mattie Breaux
Age: 24
Gheens, LA.
Mattie Breaux is a 24-year-old former beauty queen from Gheens, LA. Standing tall at 6'3 with heels on, Mattie is never shy to speak her mind. She loves being the center of attention and partying is one of her favorite past times. Mattie truly defines “hot mess” as her love life is always full of drama. She's involved in an on-again off-again relationship back home, so this summer in Murrells will surely test its strength. After spending her summer outside of Louisiana, Mattie is ready to explore more of what the South has to offer.

Josh Murray
Age: 31
Louise, MS.
Josh Murray, who goes by “Murray,” is a loveable redneck teddy bear (if teddy bears had tattoos and loved to party) from Louise, MS. This 31-year-old has a big personality and an even bigger appetite. He loves the outdoors and loves not wearing shoes even more. Murray claims he's never one to start a fight, but the fact that he's 300 lbs. and usually the biggest guy at any party, he somehow always ends up in the middle of them.

Lauren White
Age: 21
Pineville, LA.
Lauren White is hell on heels from Pineville, LA. At 21 years old, Lauren is ready to get of her mother's house, party hard and get her extensions dirty. She loves to go mudding, has a weakness for country guys and is worried that she will fall in love this summer in Murrells. When it comes to taking her clothes off, Lauren will be the first to strip down to her birthday suit, as long as it's in the name of a good time. She's a firm believer of living life with no regrets and always speaking her mind.

Walt Windham
Age: 26
Frankfort, KY.
Walt Windham is a 26-year-old wild redneck from Frankfort, KY. He has an appetite for danger and the inability to say no to a dare. He excels at off-roading in his big truck, working with his hands and dancing up a storm with ladies from the local bar. While Walt is not currently looking for love, he still enjoys mingling with the ladies and lending them his ear. He tends to be the voice of reason in this crazy household, which causes him to lose patience with his roommates at times.

Taylor Wright
Age: 23
Rockingham, NC.
23-year-old Taylor Wright, known in the house as “Lil Bit,” is a cute, country girl who, despite her petite build, isn't afraid to stand her ground and make sure her voice is heard. A native of Rockingham, NC., Lil Bit loves guns and her Bible – so much so that she sleeps with one hand on each of those items every night. While she has the ability to drink all night and flaunt her stuff around town, she always makes sure she's up the next morning to head to church and say her daily prayers. She loves teasing all the boys, but at the end of the day she prides herself on her high standards and refusal for one-night stands.

Lyle Boudreaux
Age: 28
Lafayette, LA.
Lyle Boudreaux is a 28-year-old momma's boy who grew up in the backwoods swamps of Lafayette, LA. He considers himself a down-home gentleman with a Cajun swagger and a southern smile that ladies can't resist. Lyle loves the sound of his duck calls, and his five-year-old daughter means the world to him. Making people smile comes easily to him and he's all about having a good time. Lyle hopes to someday find a nice, country girl whom he can bring home to his mother.

Tiffany Heinen
Age: 25
Eunice, LA.
Tiffany Heinen is a farmer's daughter, with a pet pig named Rooster. This 25-year-old, from Eunice, LA., grew up on a 180-acre farm surrounded by rice fields and alligators. Loud and opinionated, Tiffany never keeps anyone guessing about what is on her mind. She cooks, cleans, parties, and as everyone in the household can attest, she certainly knows how to talk. Tiffany has standards when it comes to the guys she dates – if they don't drive a truck, they might as well not ask for her number.

Ryan Richards
Age: 33
Orange Beach, AL.
Ryan Richards is a 33-year-old southern ladies man from Orange Beach, AL. He refers to himself as “Daddy” and his past proves that he has had better luck hunting women than deer. Daddy has an appetite for courting danger and he never leaves home without his best friend, the beer funnel. He loves to spear fish, arm wrestle strangers in bars and drink… just about anything. There are three things that Daddy is scared of: rattlesnakes, redheads and STDs. He has never met a girl who could keep up with his partying lifestyle, and he believes he might be cursed as a single man for the rest of his life because of this.