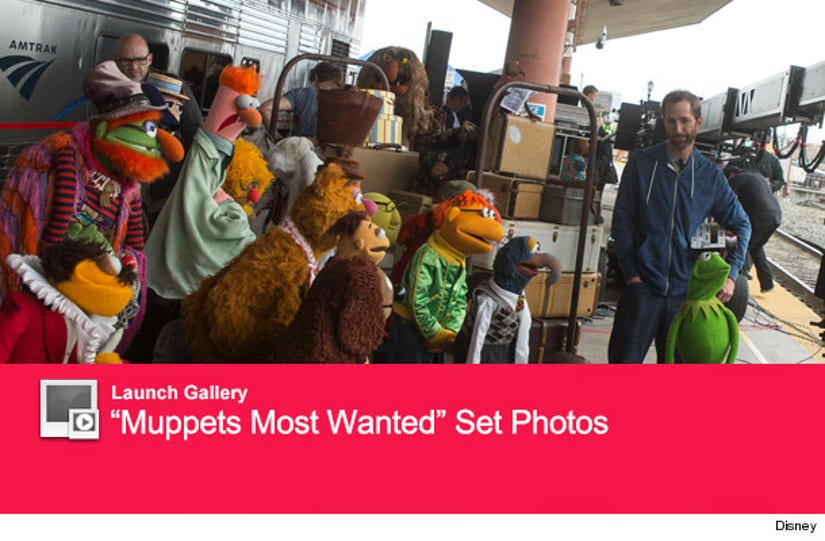 The Muppets are heading back into theaters for "Muppets Most Wanted" this March -- and we've got some top secret intel from the set!

On a gloomy day back in May 2013, toofab's Brian Particelli and a small group of journalists were invited to Union Station in Los Angeles to witness a pretty incredible scene: A massive Muppet gathering (above).

Kermit, Fozzie, Gonzo, Miss Piggy, newcomer Walter and everyone from Janice to Thog were all on hand for filming, as they boarded a train from L.A. to Europe (don't ask!). 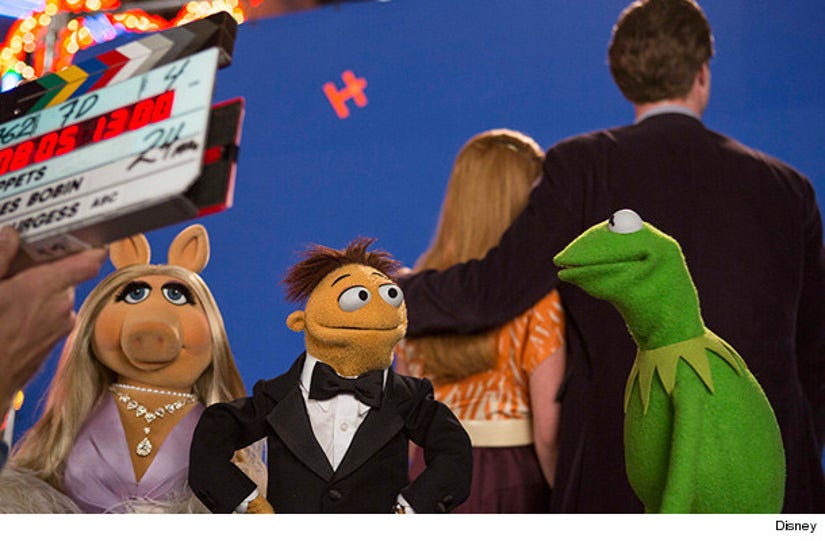 The two biggest human stars of "The Muppets" won't be returning ... and not everyone is sad to see them go.

"This is a muppet movie, nobody cares about the humans," Miss Piggy tells toofab. "Let's just see if it was in somebody's contract that [Amy] was not allowed back in the sequel to the successful first film, that was so successful because of me."

"I've grown up and moved on," adds Walter. "I miss him though. I always have a special place in my heart for Jason Segel, my movie star brother."

2.) It's Not Easy Being a Puppeteer

With almost every muppet in the scene we witnessed, it was a VERY crowded set -- and a very uncomfortable one for the puppeteers.

"You have an exterior location like this that isn't built three and a half feet off the floor, and you have to put people on the floor and stuff people in small spaces," producer Todd Lieberman tells us.

We saw firsthand what he meant, with a sea of puppeteers sitting on their knees or Indian-style for an extended period of time. They had screens at ground-level so they could see what the camera was shooting, to help keep their puppets in frame. 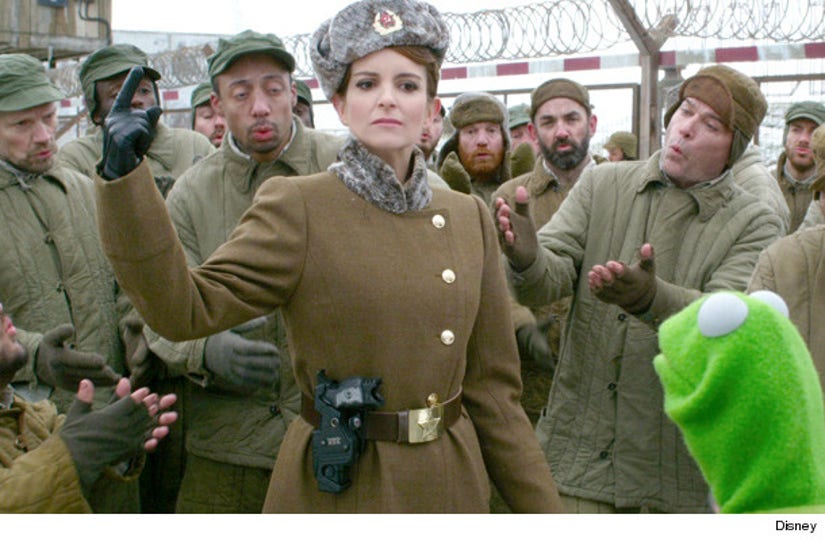 3.) Tina Fey Should Watch Her Back

The hilarious Tina Fey stars as a gulag prison guard in the flick -- and she may have a thing for Kermit.

"I don't want to embarrass Tina and I love her," the green guy tells us. "But I think that's only on camera. She's a married woman ... and besides, Miss Piggy might read this and you don't want to know what could happen!"

When we talked to Miss P though, she didn't seem too concerned.

"[The new actors] are wonderful, absolutely wonderful," she says. "Which ones are they again? As long as they don't get between moi and the camera, they're also very healthy."

"I am once again returning as Kermit the Frog, a part that I was born to play," Kermie says. "What's cool about it this time, I'm sort of like an action hero. You'll see me do things you haven't seen me do before. I'm kind of like a cross between James Bond and something Bruce Willis would do!"

We were told to expect some serious explosions -- and to see Kermit hanging from the bottom of a helicopter. 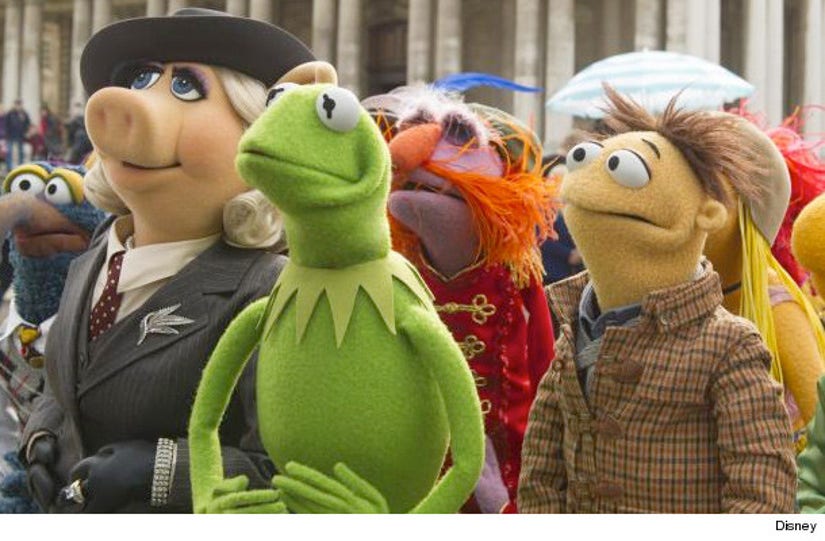 Much to Miss Piggy's chagrin, the whistling muppet introduced in the 2011 film will return.

"He still messes up my coffee order, so until he gets that right I'm gonna keep calling him the new guy," Piggy says. "Who needs anybody new when you have moi?"

And while he plays a key role in what he says is a "dramatic turning point in the movie," Walter is just glad to be involved with the film at all.

"If they just let me bring water to the guys on set, I'd be happy in this film," he says.

6.) Filming In the UK Proved Tricky

The cast and crew filmed a lot of the movie on location in England, with the weather working both for and against them.

"It was ten below zero in the wind-chill and we were outside all night," Kermit says about one scene in Upper Heyford. "I am a semi-naked frog, so it was quite an experience, like the polar plunge!"

But they really lucked out when it came to a pivotal scene at the Tower of London, a notoriously gloomy locale.

"There were four days that we needed sunshine on the exterior," Lieberman says. "But every single day that we needed sun, we got sun in London. Two of those days happened to be at the Tower of London, and this was, as I'm told, a location that hasn't ever allowed a major film crew inside the walls to shoot." 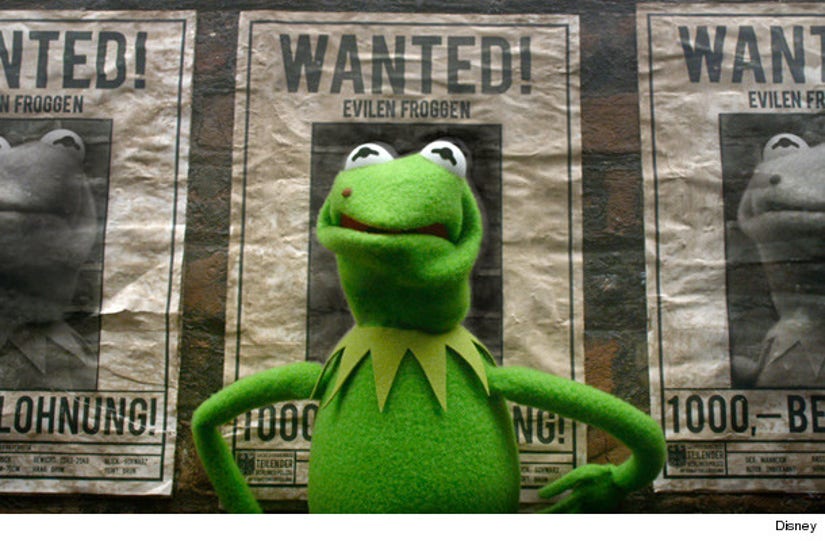 7.) Kermit Has a Doppleganger

Though Kermit has an evil double named Constantine in the movie, he doesn't play him.

"We talked about it," Kermit says of possibly playing dual roles. "But I have to admit that I'm not great at doing the accent that Constantine had. Constantine had a European, russian accent."

Lieberman confirms another puppeteer controlled and voiced the part, with Kermit saying he was played by "one of my cousins from the swamp."

The puppeteers rarely spoke out of character -- continuing to act as their muppets (and move their mouths) between takes and after bloopers.

From planes flying overhead to a tongue-tied Kermit, we saw quite a few authentic screw-ups that will definitely end up on the gag reel! 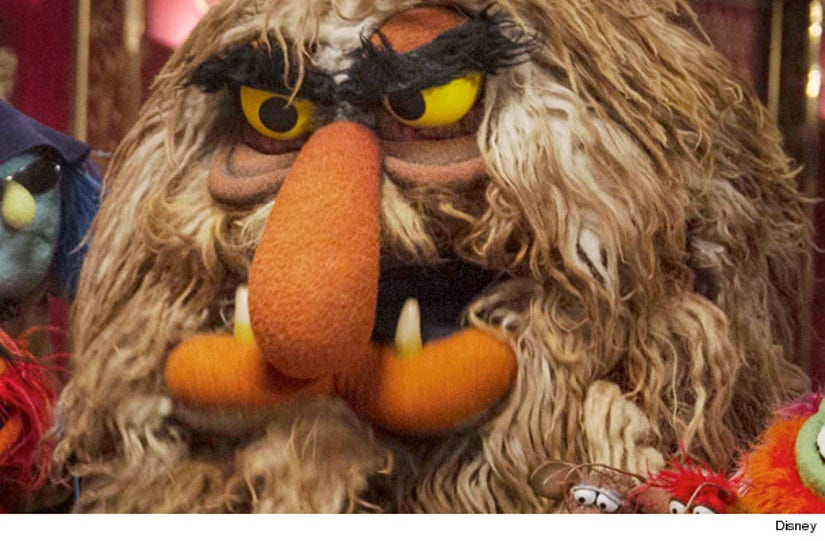 While he's a hairy, lumbering creature on film, the guy inside the Sweetums suit is actually really attractive.

When we saw him without his mask on set, he was almost Sam Claflin-like in appearance.

10.) There Will Be More Amazing Music

"The Muppets" won an Oscar for Best Song -- and the film's music supervisor Bret McKenzie is back.

"We've got music that spans from a ballad to an unbelievably fun, old school, musical style romp," Lieberman says. "He's showcasing all kinds of music in this!"

Kermit was excited about one song in particular.

"We did a number called 'The Big House,' which is Tina Fey's big number," he reveals. "I have to say, I was meant to act like I'm depressed [during filming], which is hard to do because it's such a fun song. I think people will see a side of Tina they haven't seen before." 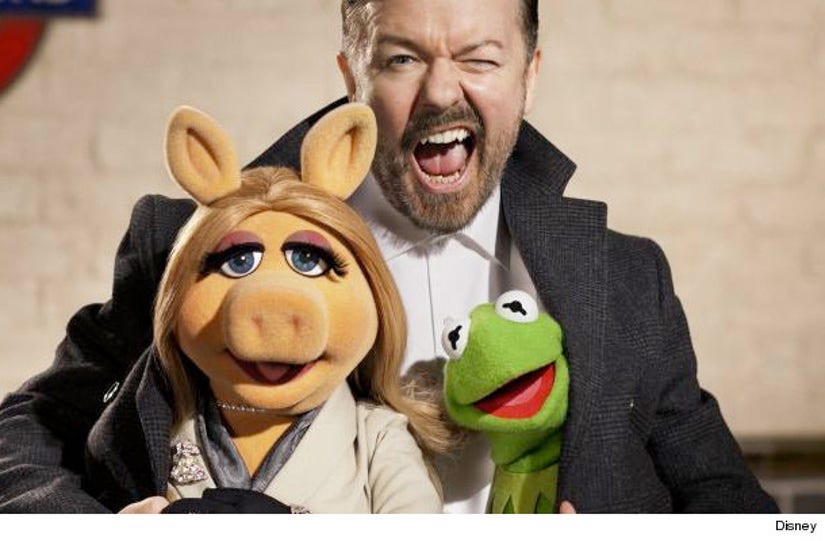 "Ricky is wonderful, I think he'll probably become an honorary Muppet," says Kermit. "He's kind of our size, very funny and great playing opposite all us guys."

Of course, Miss Piggy didn't see it quite the same way.

"He's somewhere in the background," she tells us. "He did that show 'Extras,' which I saw, and I thought he would be perfect to be an extra in my movie."

12.) They All Split After Filming

When they're done, most of the guys don't see too much of each other.

"Some of us see each other when we're not working, but many of us go our separate ways," Kermit says. "I always go back to the swamp. Piggy goes to Rodeo Drive for a holiday."

"I hang out in a box. That part I was not expecting." 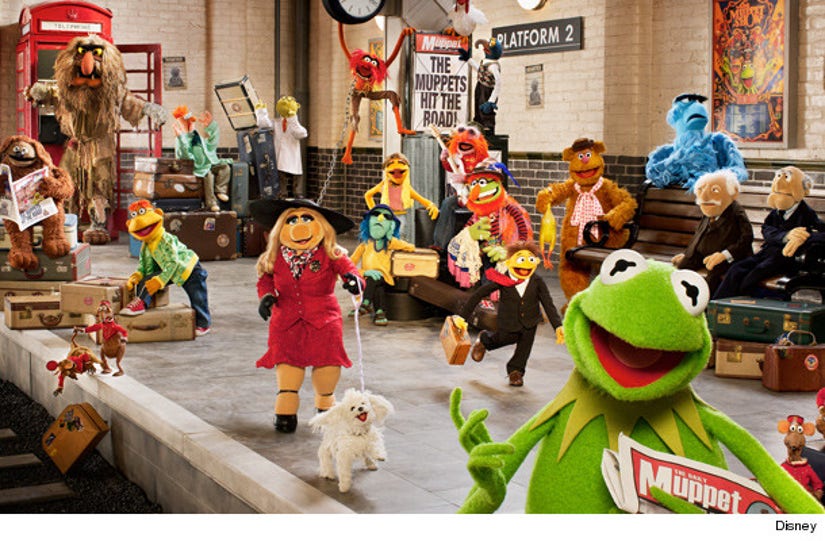