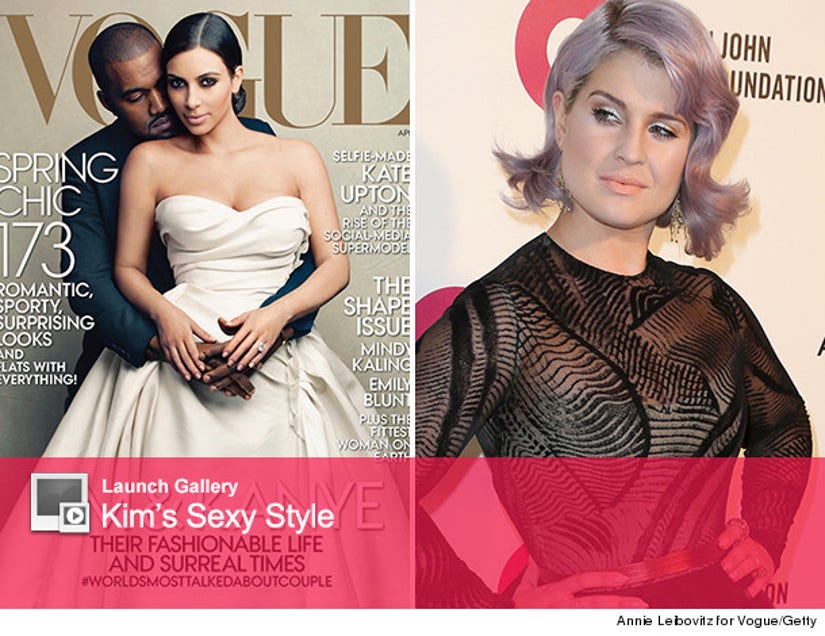 Is Kelly Osbourne on Team Kimye?

While Naomi Campbell and Sarah Michelle Gellar have bashed Kim Kardashian and Kanye West's Vogue cover, the "Fashion Police" star is defending the power couple on her blog -- telling haters to stop "raining on their parade," while also throwing just the tiniest bit of shade.

"There is no denying that it looks like a really beautiful picture for the cover of Prom magazine, so I understand why the fashionistas of the world would not like it," she wrote.

That said, she thinks the criticism is a little extreme.

"People are even going so far as to cancel their subscriptions or bloggers [are] taking down the link to Vogue magazine. I don't want to even go into the awful things people have said about them," the 29-year-old added. "I find this disgusting."

Ozzy Osbourne's daughter came out in defense of the magazine's editor Anna Wintour, who stepped out with the fashionable couple last night.

"Regardless of whether or not you think Kim and Kanye are worthy enough [to] be on the cover...it's not your decision to make. I do believe that would be up to Anna Wintour," she said.

"Vogue would be not be what it is today without her foresight. She knows what she is doing and no one can make her do anything. Sooooooo to all you people bashing Vogue, Kim, Kanye, and Anna, stop and really think for a second because I am willing to bet my life that whether you recognize it or not, somewhere hidden deep down inside of all of us is the dream of being on the cover of VOGUE!!!"

She went on: "So back off, stop s--tting on people's dreams that have come true and try for once to be happy for others' success. Stop raining on their parade!"

Kelly also compared Kim and Kanye's cover to the 2008 Vogue issue with LeBron James and Gisele Bundchen. Check out Kelly's blog to see what else she had to say about the controversial cover.

Do you think Kimye deserved the cover? Sound off below, and click "Launch Gallery" above to see more photos of Kim's sexy style!