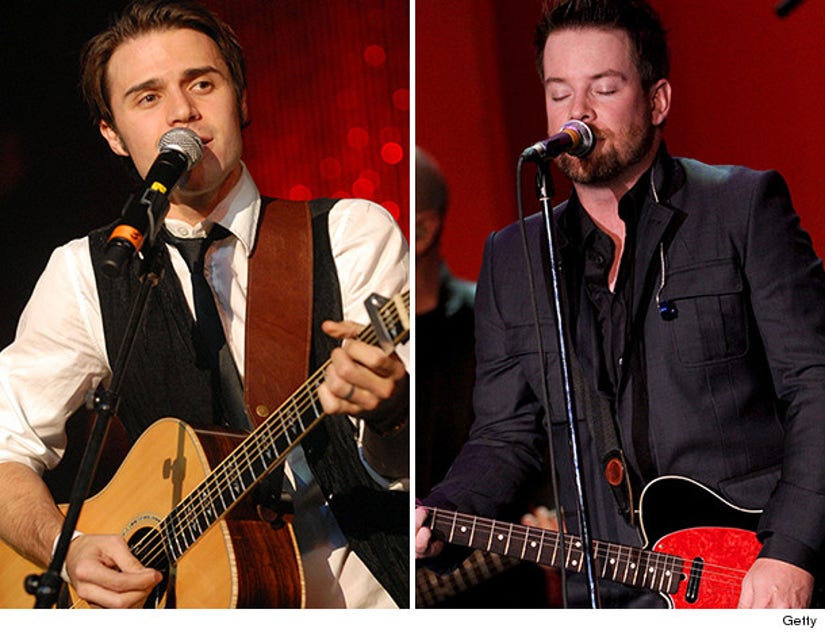 Season seven winner David Cook and season eight champ Kris Allen will share the stage for "A Sole-ful evening with Kris Allen & David Cook" sponsored by Barefoot Wine & Bubbly on Tuesday night in Nashville, Tennessee. The concert will raise funds for Soles4Souls, an anti-poverty organization that distributes shoes and clothing to those in need.

toofab's Rachel Hoffman caught up with the crooners on the eve of their charity concert to talk about everything from their "Idol" fans to their most embarrassing TV moments.

It's been five years since Allen took home the "American Idol" title, and he explained how his fans have changed over the years.

"When you come off the show, fans are enamored with the TV part of it. They love what you did on the show -- the songs that you sang -- and it gives you that platform," he said. "After the show, I would like to think that people who come to shows now are more impressed by the musicality and the songs that are mine. It feels like more of a life-long fan who comes to the show now."

Cook agreed with his fellow alum, saying he had more female "Idol" fans during the show. But now that he's playing his music, not just popular covers, more male listeners are coming to hear him play.

"When you're on the show, you're singing covers. I came off the show as a singer-songwriter and I've been through a learning phase over the past five years," Allen added. "It's helped me figure out exactly what I want to do -- and the sound that I want. Each record has been completely different, and I'm proud of all of them."

Both singers clearly understand what it takes to win on the hit reality series. So, would they want to return to "Idol" as mentors?

"I would love to. I have done what those kids have done. I also think I have a good grasp on what the viewers what to hear," Allen said. "Those kids go through a lot, and there aren't a lot of people who know what they go through."

Cook also would want to come back and share some of his sage advice with the up-and-coming musicians. "It's important to be prepared to hear the word 'No'. I heard 'No' a lot before I heard 'Yes' on 'Idol,'" he said.

The Missouri native also revealed one of his most embarrassing "Idol" moments -- flubbing a few lyrics during his performance of "Hungry Like The Wolf."

"If you watch that performance back, you'll see that I messed up the words. No one caught it at the time, so I guess that slipped through the cracks!" he recalled.

Another cringe-worthy memory from the show was his homage to "Risky Business." Both Cook and runner-up David Archuleta danced around in their underwear in a Guitar Hero commercial.

"When there are kids and grandkids in the picture, that will definitely be something I hide from them!" he joked. Check out his dancing skills below.

Speaking of fatherhood, Allen and his wife Katy O'Connell welcomed a son, Oliver Neil, back in July. He explained how his music has changed since he became a dad.

So, will baby Oliver follow in his father's musical footsteps? "I would like to think so. We have definitely surrounded him with music and musical toys. He has this giant piano that he plays for hours."

We would love to see Allen and Cook hit the stage together, but who are their dream duet partners?

Time to get those collaborations in the works!