Katy Perry is taking her breakup in stride.

On Monday's "Jimmy Kimmel Live," the "Dark Horse" singer confirmed that she and John Mayer split, and then she laughed it off by making a joke about not having a boyfriend.

The pop starlet faced off in a trivia contest against a superfan (they're called "Katy Kats") named Emily.

"How well do you feel that you know Katy Perry?" Kimmel asked Perry. "Very well," she replied. "I'm ready to play me."

Emily said on the show that she used to have a wall dedicated to the "California Girl" songstress, before her boyfriend told her to take it down.

"At least you have a boyfriend," Katy said, making a dig at her ex beau.

The game began with a personal question, the name of Katy's parents. Emily responded first: Keith and Mary. Correct! Emily answered the second question, too, identifying Kelly Clarkson as the "American Idol" contestant for whom Perry wrote two songs.

Perry was stunned by her challenger's success! When the late night host asked the next question, Perry tapped the buzzer with her head, recalling the first film soundtrack to use one of her songs. 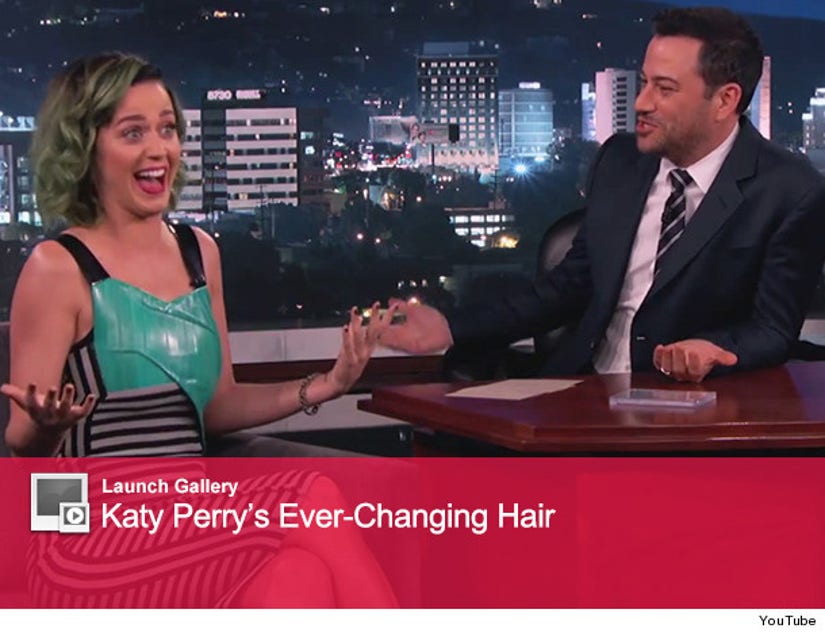 "Travelinghood of the Sister Pants," she said. What?!

She tried again. "Sisterhood of the Traveling Pants." That was close.

Perry tied things up by describing what she did to earn a sixth-grade detention. "Humping a tree," she said with a smile on her face.

Both of the competitors missed the next question about Perry's Twitter followers – it's 52.4 million.

Check out the video above to see who took home to trivia prize, and click "Launch Gallery" above to see Katy's ever-changing hair.

We know that she loves to switch up her look, but she's completely unrecognizable in the trailer for her music video for "Birthday!"

Perry plays the "world's worst birthday party entertainers," which include an old woman with a revealing neckline, a Jewish bar mitzvah emcee, a despondent clown, a creepy animal trainer and a princess with a Valley girl accent.

Watch the hilarious teaser below.