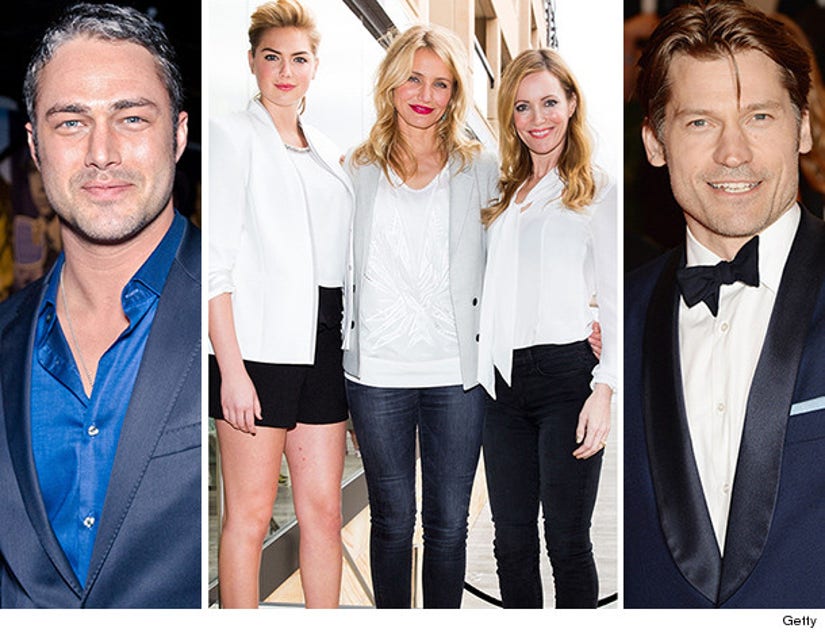 "The Other Woman" stars are hilarious on and off-screen!

toofab's Brittany Kyles caught up with the stars of the flick, Taylor Kinney, Kate Upton, Cameron Diaz, Leslie Mann and Nikolaj Coster-Waldau, at a press conference for the comedy in Beverly Hills -- where they weighed in on topics like soul mates, betrayal and bruised bums.

Each of the stars agreed that the true story of the movie is about empowering women as three ladies come together after they've been played by the same man.

"We didn't want it to be a story about men," Cameron said off the bat. "It's not just a story about friendship and women, it's how we support one another."

"And it's written by a woman, so it's automatically better," Leslie added. "It seems like a lot of other movies with the same kind of men have been written by men and directed by men -- not that it's a bad thing -- but they like to perpetuate this idea of women fighting over them and have brainwashed us into believing that that's what we are supposed to do. So it's empowering."

While the "This is 40" actress was drawn to the script because of its strong female story line, she couldn't deny that she was also pretty excited to make out with the "Game of Thrones" hottie.

"It was really a thrill for me too, because I got to make out with the hot guy from 'Game of Thrones.' I have been married for 17 years and thought 'Yes!'" she confessed.

While Mann definitely enjoyed the idea of being intimate with Nikolaj, there were a few hiccups in the process.

"I was so excited to make out with him, and I got red, like really red and I broke out into hives. I thought maybe it was his after shave or something and we did it again and I broke out in hives again!" she revealed. "But I finished the job, I got the job done."

"I think the most challenging part was working with Leslie and trying to keep a straight face," he said. "You're in the middle of the scene and she'll just throw a curve ball and someone starts to laugh and then you laugh and have to just turn around so she can keep going."

And while the flick's villain is put through the wringer by the three ladies, Nikolaj left the set with some semi-serious injuries ... thanks in large part to the Sports Illustrated model and a whip.

"Well let's start off with the fact that I said I wasn't comfortable with the scene and somebody said they were down for the scene," Kate disclaimed.

"I thought she did a terrific job, I've never seen colors that beautiful on my ass before," the actor said in regards to his bruised backside. "I'm a horseback rider, I know how to use a whip," Upton quipped.

Unfortunately, the scene which featured Kate whipping Nik didn't make the final cut, but we're sure the "Game of Thrones" star will never forget that moment with Upton.

What we would have paid to be on that set! Are you excited to see "The Other Woman"? Tell toofab in the comment section below!