It's one of the sexiest strip teases in cinematic history -- and now, Salma Hayek's "From Dusk Till Dawn" snake dance is getting a makeover.

Hayek charmed male audiences (and one giant python) in Robert Rodriguez's 1996 cult classic, which just got a TV series reboot on the director's recently-launched El Rey Network. This time around though, it's Eiza Gonzalez slipping into vampire priestess Santanico Pandemonium's slinky bikini for the sultry reptilian revue ... which happens during Tuesday night's episode.

toofab's Brian Particelli had a chat with the Mexican actress and singer ahead of the highly-anticipated performance, where she revealed how she actually had to gain weight for the role ... and added that her butt and chest will only continue to grow as the season continues!

toofab: So this is the most famous scene in the original movie, were you intimidated at all to follow in Salma Hayek's footsteps?

Eiza: Oh my god, yes! There were 1,000 feelings; excitement, nervousness, excitement again. It was just mind blowing when I started doing it. I was just focused on doing the best I could and not letting bigger monsters in my head.

Robert is amazing. What he did with that camera, he makes me look 1000 times cooler that I really am. I'm excited so I can watch it tomorrow and be my worst judge, harshest one. It's not just the dance, it's the transformation, there is so much going on. 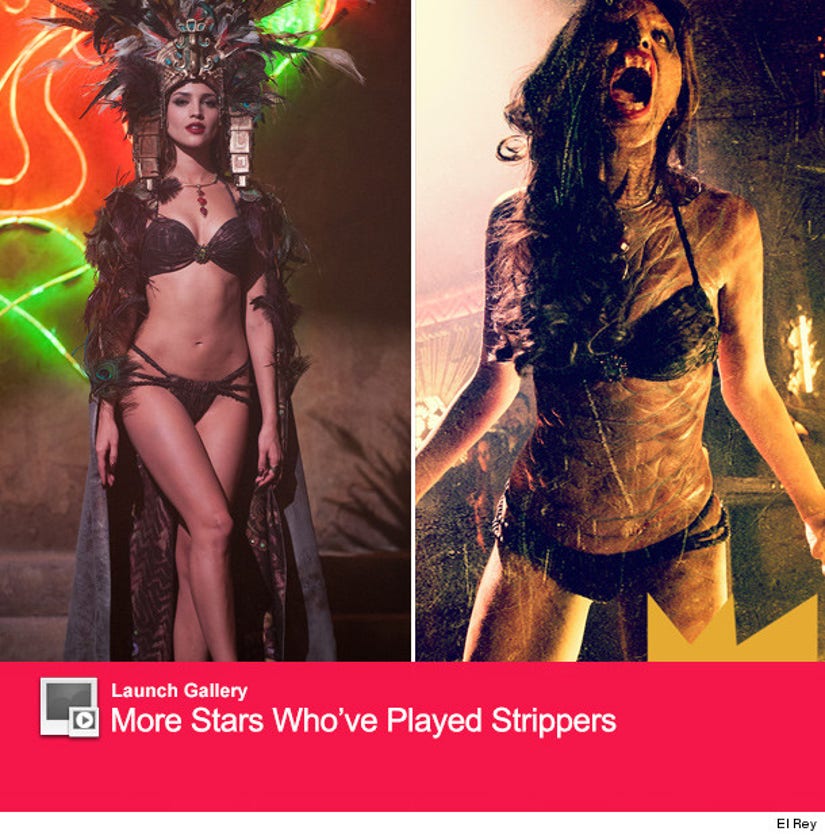 toofab: Now talk to me a little about the transformation, what was it like working with Greg Nicotero [the makeup man behind shows like "The Walking Dead"]?

Eiza: Greg is just amazing, he did mind blowing work. It took around 4.5 hours to get my makeup done. Thousands of prosthetics, a lot of makeup, claws, teeth, eyes, no brows, scales, but it was all worth it. It's terrifying. I look so creepy, it's gnarly. It's a very bloody episode, very dark. I'm more excited, honestly to see the dark side of eating people and ripping them into pieces!

toofab: Was it fun to unleash the beast?

Eiza: Oh yeah, limbs getting ripped off, it was just amazing. I loved it! I was like 'Give me more!' and Robert was like, 'Control yourself woman!' I was running around and growling. Everyone was so freaked out. I definitely have that dark side!

toofab: Did you hit the gym a little bit more before filming the big dance scene?

Eiza: I'm gonna be dead honest, I would go once a week, but I was hitting the food hard! I was eating so much, I ate so much protein, I was eating tuna the whole day just to get my muscles thicker. I got into carbs a lot, to get a little more curvy. It took me so long to gain weight, you can see my boobs and my booty growing in every episode until the end of the season. 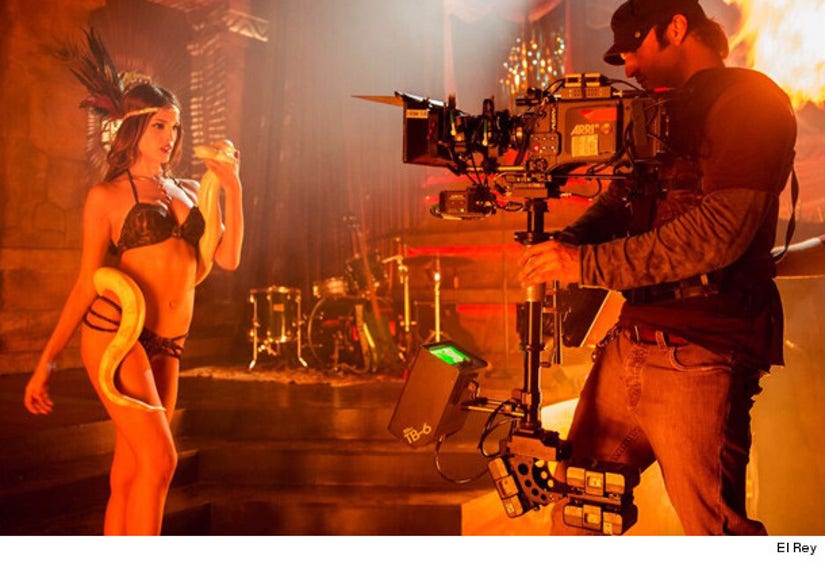 toofab: Did the snake behave himself?

Eiza: I thought it was going to be terrifying but it worked beautifully. Obviously it was hard, it's not easy to feel the scales going around the body, across my legs and up my booty. But I love the direction of Robert. It could be vulgar, but he's so tasteful, it's sexy.

toofab: This is your first big American role -- are more people starting to recognize you?

Eiza: Definitely. Robert has a cult following. It's just crazy, as soon as you start working with him so many heads turn. It really helps that my face is everywhere, on phone booths, taxis, billboards -- it gets really intense when you get to walk around to see your face next to a bus. I'm still blessed and humble and I really appreciate robert trusting me.

toofab: On the downside, with popularity comes more tabloid scrutiny, do you pay attention to any of that?

Eiza: I don't put myself in those situations anymore. I'm very focused in my work. My lifestyle right now is waking up, going to the gym and getting ready for an audition.

At the end of the day, you're always going to be under this huge microscope, people are going to be waiting for you to do something wrong. Stories are embellished to make it more attractive and appealing, when 99.9% of the time, it's just blah. I don't pay attention to it.

People forget about what happened last week, the only thing that matters is the work!

Check out Eiza in action Tuesday nights at 9PM on El Rey Network.

And, just for fun, get a look at Salma's original dance below: