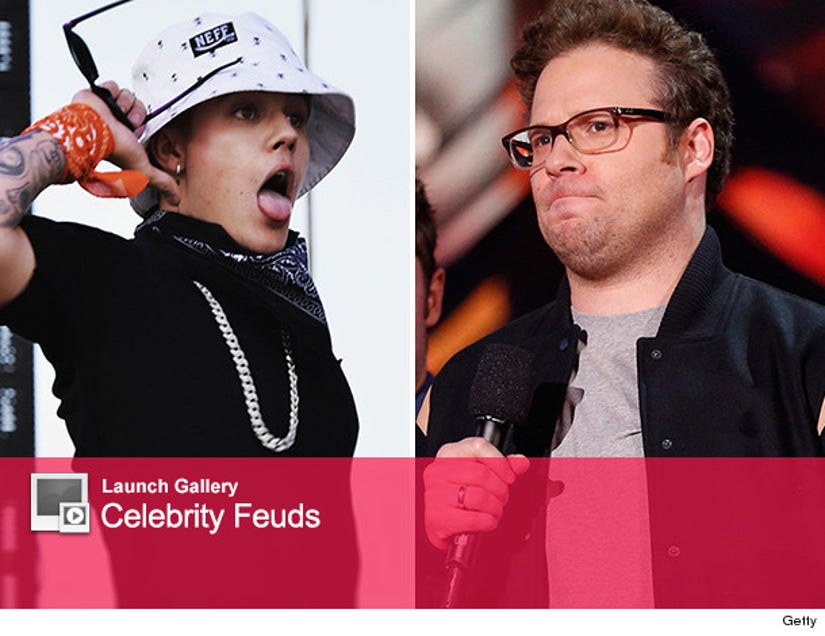 This feud is heating up!

Justin Bieber took to Twitter to respond to Seth Rogen's recent comments, which include the "Neighbors" star calling the singer a "piece of s**t."

"Seth Rogan, sorry I didnt bow down when I asked 2 meet u," Bieber tweeted, misspelling the comic's last name. "Was probably a bit shy and didn't want to be over the top but still. love ur movies."

Rogen's contempt for Bieber was first made known to fans in January, when the actor posted a tweet, saying, "All jokes aside, Justin Bieber is a piece of s**t." Bieber had just been arrested for drag-racing in Miami at the time.

The 32-year-old funnyman held nothing back when it came to discussing his encounters with the 20-year-old pop star during his interview on Howard Stern's XM radio show on Monday.

"I've met him a few times. He's a good example of someone who you meet who you think you are going to hate and then you get to hate him as much as you [thought]...You meet him and he lives up to every one of your expectations of how you hope he'll be," Rogen told Stern, adding that the first time he met Bieber was backstage at a German talk show, where Bieber specifically requested a meeting with the actor.

According to Rogen, once the two were introduced, Bieber made it seem like Rogen was the one who asked for the meeting to take place.

We don't see a bromance brewing between these two anytime soon!

Are you on Team Bieber or Team Rogen? Tell toofab in the comment section below, and click "Launch Gallery" above to see more celebrity feuds.