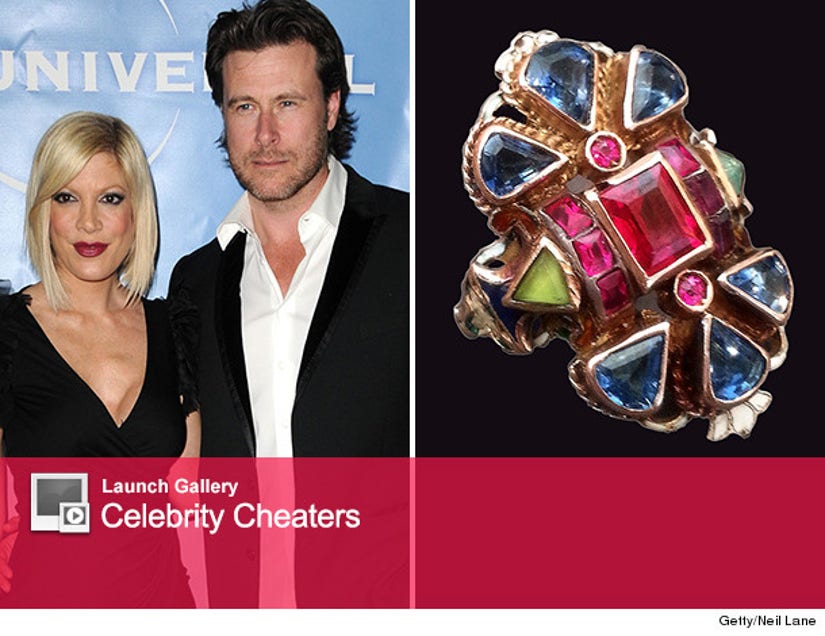 Tori Spelling and Dean McDermott celebrated their eighth wedding anniversary on Wednesday, less than six months after the actor had a very public affair.

And though fallout from the cheating scandal is still continuing to play out — and is being shown on their docu-series "True Tori" -- the actor continued the couple's anniversary tradition by gifting his wife with a vintage ring from Neil Lane.

Tori's new bling is a hand-engraved, Renaissance-inspired ring that's set in 18-carat gold with pear-shaped sapphires, square-cut rubies and greenish yellow peridots. According to our sources, the ring costs between $10,000-$25,000.

"Dean wanted to keep tradition and celebrate their anniversary and 'love story' with a very special, beautiful ring set in gold — and this one is really cool with lots of color," Lane told People. "He loved the multi-color and he wanted gems. It's very stylish and different. He wanted to get a really special jewel, something meaningful – he wanted to show up for Tori with a beautiful ring."

The "Chopped Canada" star, who buys a ring for the actress every anniversary, was delighted that his choice was a hit.

"Dean seemed really excited to give her the ring," the jeweler added. "And he texted me and said Tori was thrilled, that she loved it. He said it was her favorite ring of all the years!''

McDermott also was spotted shopping at Victoria's Secret this week, so Spelling may have gotten something a little more sexy to celebrate the milestone as well.

What do you think of Dean's gift to Tori? Tell toofab in the comment section below, and click "Launch Gallery" above to see more celebrity cheaters!