The late night host enlisted athlete-turned-actor Terry Crews to perform a shirtless duet -- or a nip sync -- of the Paul McCartney-Stevie Wonder hit "Ebony and Ivory" on Monday's "Tonight Show."

The 45-year-old "Brooklyn Nine-Nine" star showed off his cut chest, while Fallon opted for a chest double as his head can be seen superimposed over a buff, oiled-up hunk's torso.

Crews has clearly been spending some time in the gym, and we would love to meet Jimmy's body double! Check out the hilarious video above. 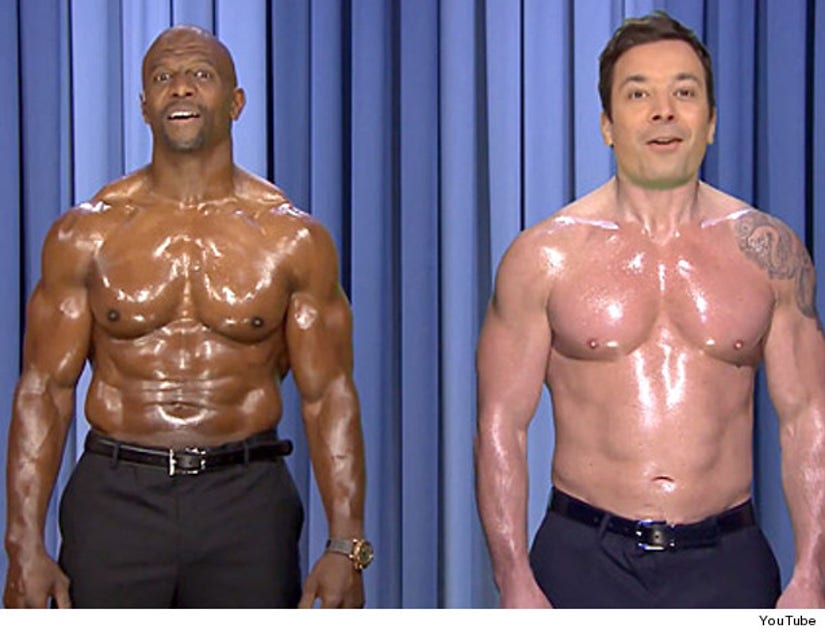 Not only did the former NFL player show off his nip-syncing skills, but he also talked about one of his first jobs after retiring from football.

"I played a character called T-Money on a show called Battle Dome. Now, Battle Dome was basically American Gladiators on steroids," he said in a "Tonight Show" web exclusive. "The whole logline for the show was called 'Real Warriors, Real Pain.' I was one of the warriors and we would battle contestants and they would win money. But it was extremely dangerous," he added. "They'd put me into a cage that was kind of built like a Coke can, and then they'd set the ends on fire and open up the cage and take a crane and lift us into the cage. The whole object of the game was that each contestant had to get me out of the cage. Needless to say, I didn't want to go. It was a brutal battle that was a lot of fun."

We'll take his word for it!

Watch the video below to see what else Terry said about this weirdest role.