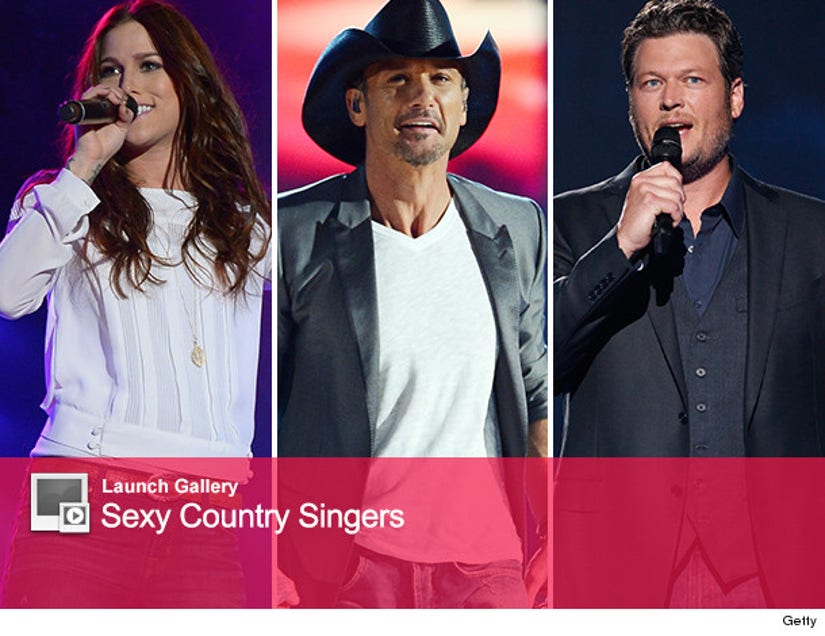 Cassadee Pope may be a rising star, but she's still very grounded!

The winner of Season 3 of "The Voice" chatted with toofab's Brittany Kyles, where she opened up about her new tour with Tim McGraw, her current relationship with "Voice" mentor Blake Shelton and her new partnership with Outnumber Hunger.

The 24-year-old has already dropped two hit singles since winning the singing series last year, "Wasting All These Tears" and "I Wish I could Break Your Heart," and now she is touring with the "Highway Don't Care" crooner.

"It's been amazing [touring with McGraw], I have been a fan of his for a long time so to be able to tour with someone you are a fan of is pretty surreal," explained Pope. "I've been watching him on stage and he is just such an entertainer so it's been a massive experience for me."

The 47-year-old also sounds like he has a pretty great sense of humor, too. "I was doing an interview with Tony Allen from CMT and there was a massive loud knock on the door and someone yelled and I got scared thinking 'Oh my gosh I am going to be so embarrassed,'" she said.

"Somebody opened the door and of course it was Tim McGraw. So, he's a little jokester. He doesn't take himself too seriously which is nice."

Pope has another country heavyweight in her corner, too. The brunette beauty is still pretty close with Shelton, who mentored her on the NBC competition.

"Yes, we have stayed in touch. And I love that he stays up to date with my career and he is always texting me and congratulating me on my stuff," she revealed.

"I remember thinking how excited I was about 'Wasting All My Tears' going Platinum and he congratulated me on that and it really meant a lot. He's awesome."

Pope also tries to catch up on "The Voice" in her down time ... even though the show still gives her some nerves.

"I still get nervous, like I am going to be on it or something. But, it's a great show. I love that it's raw and it gives people a second chance who have been doing this for awhile," she said.

And as a winner, Cassadee has some great advice for next season's crop of contenders.

"I would say to go with your gut instincts, because it's very easy to second guess yourself in that kind of a situation especially when you are being judged and looked at so closely by all the judges and America. So if it feels uncomfortable, then you probably shouldn't be doing it," she revealed.

"I know people always say to get out of your comfort zone and take risks, but when you are on a live national television show and you are competing to stay on it, then I don't think you should be uncomfortable up there. I think you should sell it and be your own best self."

And in between her busy schedule, Cassadee has still found time to use her fame for a good cause -- she's working with Outnumber Hunger to help feed struggling families in America.

"Well, when I singed to Republic Nashville they were one of the first organizations I had been introduced to because they are big partners," she explained. "I just can't believe that this is a problem in the U.S. I was drawn to it right away and it's really simple to get involved with too, which I love."

One way you can help the cause is to download Pope's latest song, "Give 'Em Hope" which also features Toby Keith, Reba, Martina McBride, The Band Perry, Thomas Rhett, Chris Young, Vince Gill, Danielle Bradberry and The Cadillac Three.

"Well you can buy the new song on iTunes and 48% of the profit will be donated by Big Machines to Feeding America. It's a great song. There's a lot of great voices on there," Pope told us.

"And also you can also go to the grocery store and buy General Mills products like Cheerios or Yoplait and you enter the code on the back on OutNumberHunger.com and that secures five meals."

Well, we can't wait to see what the country cutie does next! What do you think about Cassadee's candid comments? Sound off below and click "Launch Gallery" above to see even more of country music's hottest stars!