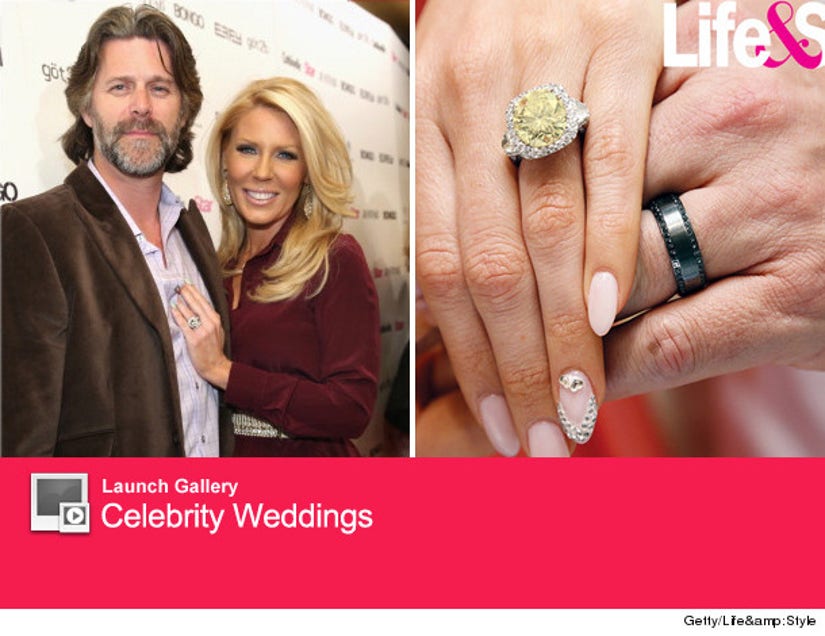 There's a wedding in the works!

Gretchen Rossi and Slade Smiley chatted with toofab's Brittany Kyles where they opened up about their upcoming nuptials, having kids and a possible reality show spin-off!

The couple -- who got engaged on their last season with the "Real Housewives of Orange County" --told us that they have already started planning their big day.

"We are definitely planning. We have found a couple locations that we love but we are not disclosing a date yet. But, we definitely have a lot of things planned that will be coming up," Rossi said.

The pair are also planning to have children ... very soon!

"As you guys know, babies have been on the brain for awhile for me, so we're working with an amazing fertility doctor. We are just really excited about that process, even though it it's hard because doing in-vitro [fertilization] is never easy. But everything is moving forward," she added.

Gretchen and Slade found fame on the "Housewives" franchise, and while they are no longer with the show, Rossi says there are no hard feelings.

"I really do wish them all well, but we have turned that page. We're really happy to be away from the negativity and how toxic it was," she said of the experience.

"As a woman, I am really about empowering other women so it just was not that kind of forum for me anymore. I couldn't be who I was in my everyday life on that show, so it made it very difficult. It became a big contradiction in my life. So, for me, when I walked away from that I don't want to go back to watching it because it gets me all upset. If provokes these emotions of frustration," she said.

The pair will appear on WE tv's "Marriage Boot Camp: Reality Stars" later this week. The couple also revealed that there may be a reality show which solely focuses on their relationship in the works too.

"Well, actually we have already been offered [a show]. So a couple people have been talking with us about it and we just really aren't sure. It's a big decision to make and it's a hard thing to carry your own show. We know people want to see the wedding, but I just don't want our special day to be wrecked," she explained.

"So it would have to be with the right group of people and the right production company. I'm not saying it needs to be a bowl of cherries because that's not life. I just don't need Slade to be portrayed as a d-bag on the day of our wedding because that's not who he is. 'Housewives' loved to do that," she added.

Smiley and Rossi are weighing out their options at the moment to make sure whatever they choose is the right decision.

We'd love to see the longtime loves finally walk down the aisle -- would you watch a spin-off show with Gretchen and Slade?

Sound off below and click "Launch Gallery" above to see even more celebrity weddings!