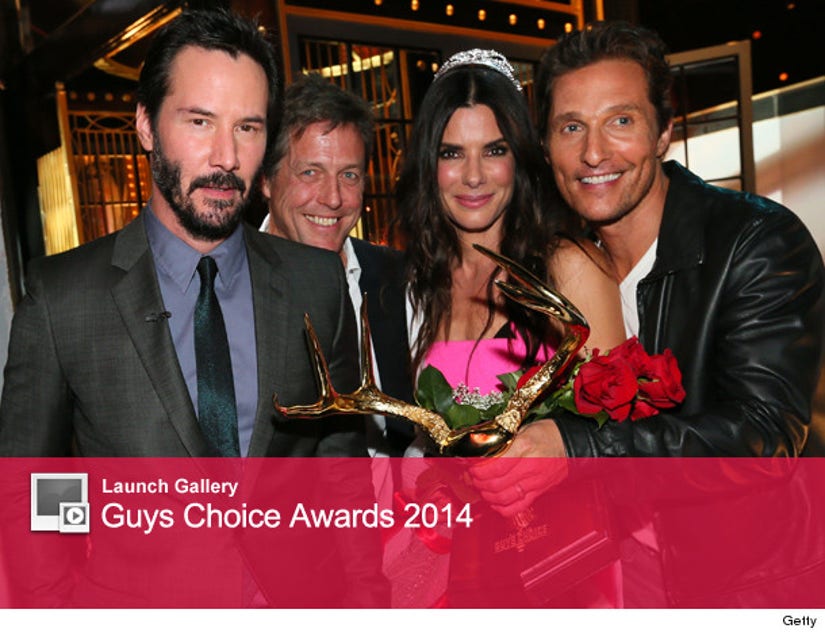 Sandra Bullock is one lucky lady!

The actress was honored with the Decade of Hotness award at Spike TV's Guys' Choice Awards in Los Angeles on Saturday, and she received a little help from a few of her favorite leading men.

Hugh Grant, who starred alongside Sandy in "Two Weeks Notice," started the tribute by talking about how she went from "sneaky hot" to just "hot." Keanu Reeves then took the stage to praise his "Speed" co-star and couldn't stop raving about Bullock.

Sandra's "A Time to Kill" costar Matthew McConaughey also stepped out and noted that he always found her collarbone sexy, and rubbed it in everyone's faces that he's been able to both successfully and unsuccessfully try to kiss her.

The brunette beauty, who looked stunning in a pink Roland Mouret dress, later took the stage to accept her coveted trophy.

"I feel like I'm at my funeral. Decade of Hotness…My question was what decade? I have several under my belt. It should really be Decade of Hot Mess. That I can own and I do that well and I'm still convinced I'm up here because someone dropped out and they needed someone quickly and we know I'm home on Saturdays," Sandra told the crowd.

Do you think she deserved to win the "hotness" award? Tell toofab in the comment section below, and click "Launch Gallery" above to see more photos from the Guys' Choice Awards.