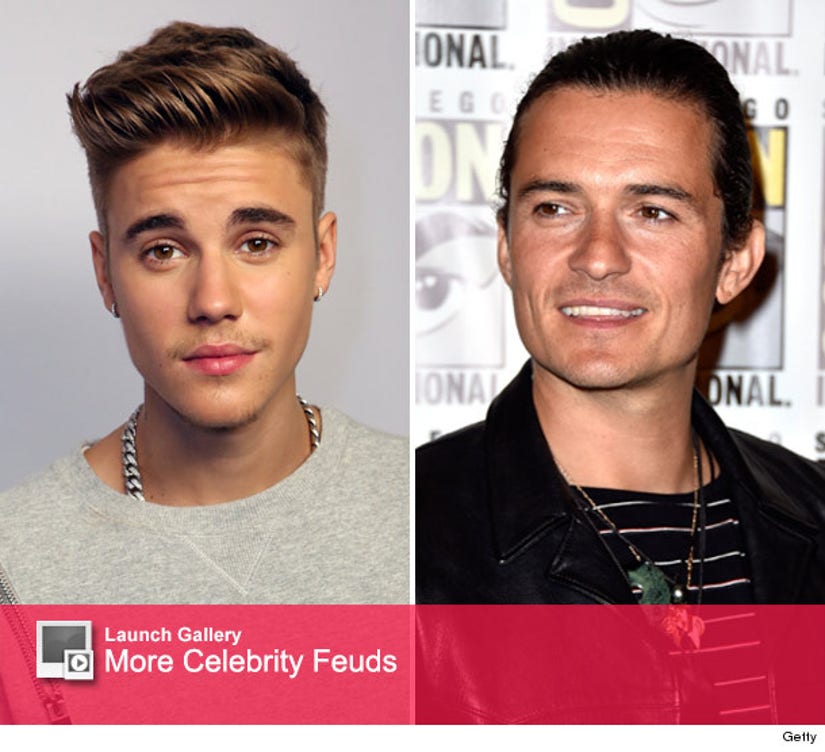 The beef between Bieber vs. Bloom is definitely heating up!

In some awesome video from TMZ, Orlando Bloom threw a punch at Justin Bieber in Ibiza on Wednesday -- the two battling over exes Miranda Kerr and Selena Gomez -- and now celebs are taking to Twitter to weigh in on the feud in 140 characters or less.

Alyssa Milano tweeted that she's on "#TeamOrlando," while James Franco said he's also on "Team Bloom" during an appearance on "The Colbert Report."

Notorious Bieber hater Drake Bell posted photos of Looney Tunes characters Spike the Bulldog and Chester the Terrier and the message "@justinbieber I found these cool pictures of you and your body guard from the other night!"

He later asked Justin's army of fans "Can you kids start looking up to a good person?!"

Another former child star, Mara Wilson, sounded off as well. "Orlando Bloom punched Justin Bieber? My teenage crush punched this generation's teenage crush," she wrote. "Less impressed to learn it was over a girl and not just because Bieber was being an a***ole."

Jimmy Fallon also joked about the feud on "The Tonight Show,"﻿ saying, "Orlando Bloom apparently threw a punch at Justin Bieber last night during an argument at a nightclub. Orlando's hand was pretty sore today...You know, from all the high fives he got!"

Here are some other stars' reactions:

Orlando Bloom didn't try to punch Bieber. It looks like he tried to flick him in the head. That's way, WAY better.

This Justin Bieber/Orlando Bloom thing is the first time I've been interested in a featherweight match.

Whose side are you on? Sound off!