Ryan Adams' new music video for "Gimme Something Good" comes with a little something wicked: The Mistress of the Dark herself!

The singer released his latest clip earlier today, featuring the one and only Elvira.

So, how are these two crazy kids connected? Her accountant!

"It's so bizarre, Ryan is a client of my accountant's and I didn't really know about him," Elvira's alter-ego Cassandra Peterson tells toofab. "I heard his name before, but didn't know much about him. He had initially approached me about a year ago to do a pinball machine, because he's a pinball freak. That didn't work out, but he called me up and said 'How about you do this music video with me.'"

Between the video's retro, VHS-quality visuals and Elvira rocking her classic look, many wondered if Adams just used vintage clips of the hostess with the mostess -- but she tells us it was filmed last month.

Yep, she still looks that good. 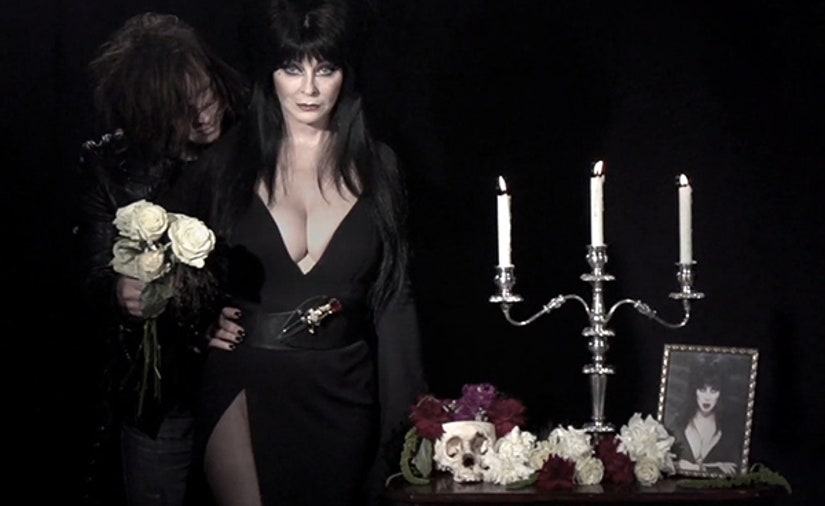 The shoot went down on what Cassandra describes as a "1,000 degree" day in July at a warehouse in Downtown L.A.

"I hadn't heard the song until that day, when they played it about 500,00 times," she says. "It got in my head and I can't get it out. I liked the song a lot and I've looked a lot more into the music he's been doing. It was a really good experience -- despite the heat!"

And now that the video is finally out there, Peterson says she's "shocked" by the final product.

"I really thought I was just going to have a cameo, I was thinking I was gonna be in it for a second," she says. "I've done a couple other music videos that weren't so great, but I'm floored about how this came out."

Those looking to see more of Elvira, Mistress of the Dark can check out her upcoming residency at Knott's Scary Farm from September 25-November 1.

"I'm going back for a second year," she tells us. "The new show is called 'Elvira's Big Top,' it's a circus themed show." Count us in!