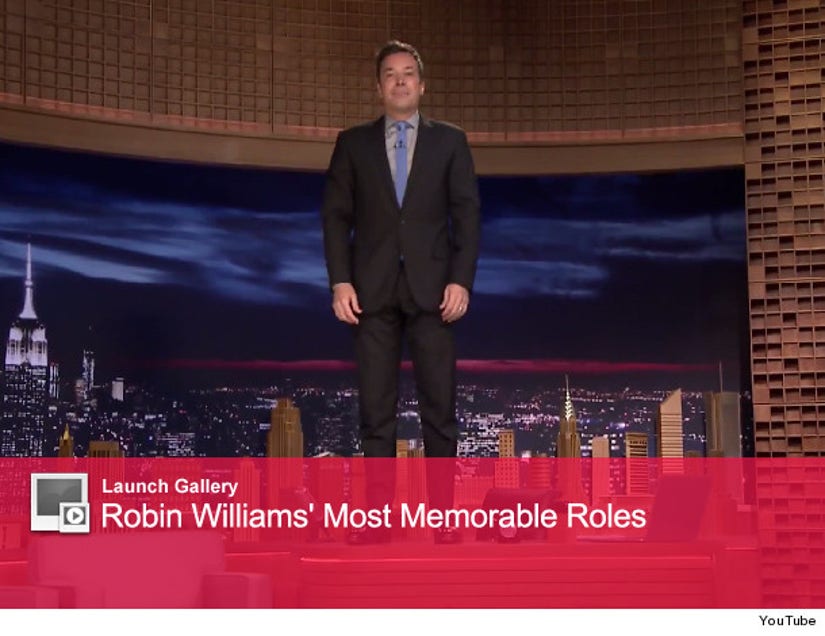 It was a night of Robin Williams tributes on late night!

Jimmy Fallon fought back tears as he remembered the late actor on "The Tonight Show" Tuesday. "We, like all of you were shaken up a bit last night when we learned that genius comedian and actor Robin Williams passed away. He was one in a kind," the late night host said. "He was one in a million."

Fallon then did his best Williams impersonation. "You would watch him and you would cry laughing, and you would think, 'I'm never going to see anyone like this human ever.' It's just amazing," he said. "His brain was always thinking 10 steps ahead of what he was saying. He was like the Mohammed Ali of comedy."

Fallon then showed a clip of Williams' first-ever "Tonight Show" appearance with Johnny Carson. The "Saturday Night Live" alum finished his touching tribute by standing on his desk and reenacting a key scene in "Dead Poets Society." "Oh captain, my captain, you will be missed," Fallon said.

Conan O'Brien, who broke the news of Williams' death to his audience on Monday, said, "Robin Williams such a funny, fantastic guy. Everybody knows that side of him. What I think a lot of people don't know—and you're starting to hear all these stories coming out now—is how crazily generous [he was]. He was so generous," the late night host said. "Such a nice person."

"Just as a quick example of what he was like, a bunch of years ago...I went through, publicly, a kind of bump in the road and I was feeling a little low. Out of the blue, Robin Williams buys me a bicycle. It sounds like a silly thing. He was the first person to buy me a bicycle since my parents bought me a bicycle—when I was 35," O'Brien recalled. Check out the video above to hear the rest of his story.

Seth Meyers also honored Williams on "Late Night" on Tuesday. He started by offering his condolences to Williams' family. "I worked in a video store when I was growing up and I used to take out his stand-up albums all the time and he brought me a great amount of joy. As I got older, films like Dead Poets Society and Good Will Hunting seemed to...be exactly what I was feeling at those times," he said. "The saddest part of this is Robin was battling depression, and if there's anything we can do to honor his memory, I would hope it would be to use this opportunity to educate us more about this terrible affliction. We just want to say that we miss Robin, but we're also very lucky to have had him at all."