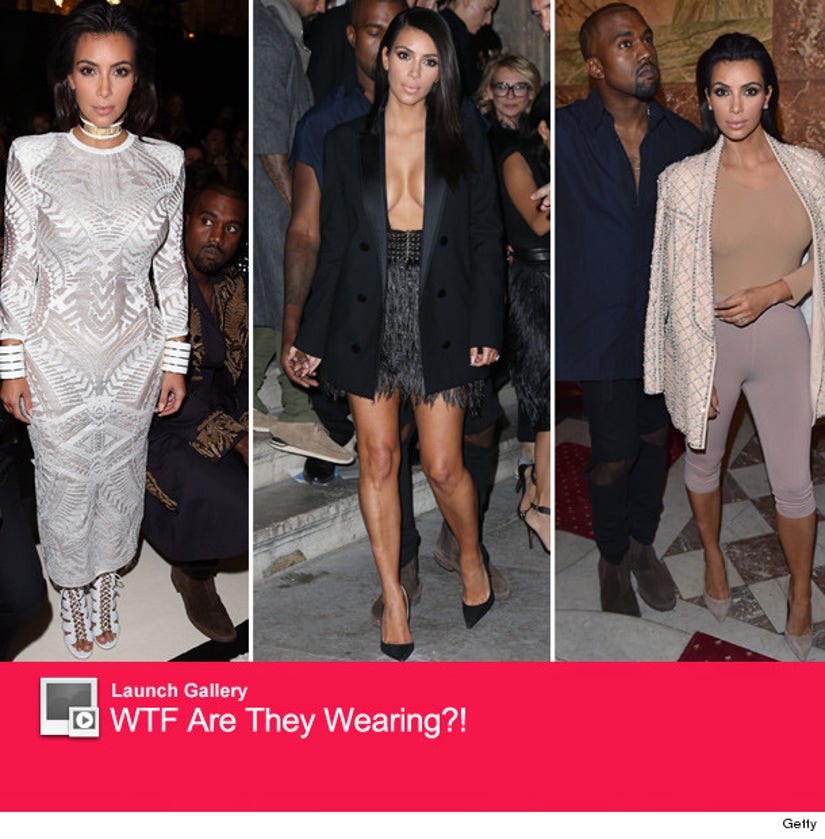 We usually call out three different worst dressed celebs, but Kim Kardashian committed too many fashion crimes this week!

The "Keeping Up With the Kardashians" star wore an interesting collection of designer outfits during Paris Fashion Week, attending a series of events with hubby Kanye West.

The brunette bombshell missed the mark at the Balmain fashion show, donning a white, long-sleeved Balmain maxi dress with a sheer tribal design. She paired the odd ensemble with Balmian gladiator sandals, a choker necklace and an arm bangle. (Of course, the rapper wore a matching embroidered look!)

North West's mama also raised some eyebrows at the Lanvin show, rocking one of her most jaw-dropping looks to date. She paired a Lanvin feather-fringed skirt with a black oversized tuxedo jacket -- and next-to-nothing underneath.

The reality starlet also failed to step up her style game at the Balmain after party, wearing cropped, lavender Alaia leggings, a beige Margiela bodysuit and a beaded white Balmain jacket, which she draped over her shoulders. Kim kept her cleavage covered up, but Kanye opted to show some skin in a blue V-neck shirt and distressed jeans.

Sorry, Kim -- these may be designer duds, but that doesn't make them fashionable!

Click "Launch Galley" above to see more of this week's worst dressed stars, including Jessica Simpson, Fergie and Rita Ora.