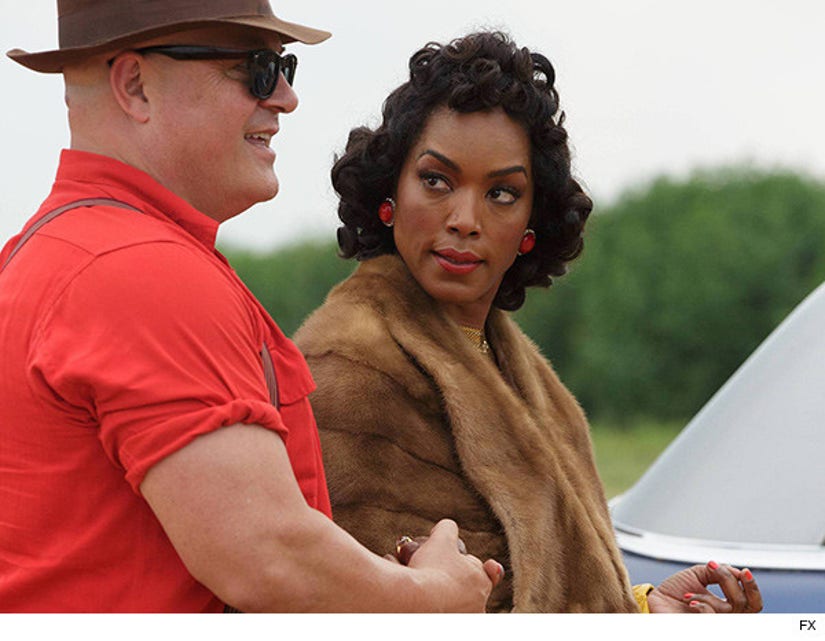 With three breasts and a "ding-a-ling" (her words, not ours), Desiree Dupree is already one of biggest scene stealers on "American Horror Story: Freak Show."

And with her character's marriage to Del (Michael Chiklis) in shambles, a scene with his son (Evan Peters) ending in bloodshed and a potential new roomie in Ethel (Kathy Bates), actress Angela Basset's got her hands as full as her bra this season.

We picked up some interesting "AHS" tidbits from the 56-year-old during a recent press conference for the show -- where she talked about her physical transformation, Twisty the Clown's shocking reveal and addressed Ryan Murphy's assertion that all four seasons of the show are "connected."

Keep reading for the biggest takeaways!

1.) Her Character Was a Complete Surprise

"I didn't have a clue whatsoever what the part might be, what it might encompass when I signed on. I just knew I had a great time the previous year and if that was any indication, it was going to be a wild ride. I think it was about two weeks before I was scheduled to start shooting that I got the hot-off-the-presses script, so I sat down to read it ... you read the stage direction, 'African-American woman in her 40s, hermaphrodite, three breasts and a ding-a-ling.' I thought 'Oh my gosh' and immediately closed the page to walk around and process that a minute. I just knew that it was absolutely going to be something I had never done before and what does an a actor crave but new challenges and this was going to be one of those."

2.) The Transformation Takes About An Hour

Sprouting that third breast isn't easy and takes a team of makeup and special effects artists to apply it anytime Angela reports to work.

First, a makeup artists puts on the appliance. Then, she heads to another trailer for the special effects guys make sure the edges are clean before painting it to blend in. They then take photos of it to see how it looks on camera.

"It takes, maybe from start to finish, about an hour. Just enough time to check out a Netflix episode of 'Orange Is the New Black,'" says Angela.

A long day on set can lead to some serious discomfort for Bassett.

"After 12 hours, you begin to itch, you begin got sweat and you can't really produce relief because you can't get to yourself, you're scratching foam," she says.

Still, it's better than the silicone piece they tried out on her at first.

"It started out fine, but it started getting hot and heavy and I believe it started sagging. What's the point of having three sagging breasts?!" she says. "The difference is night and day." 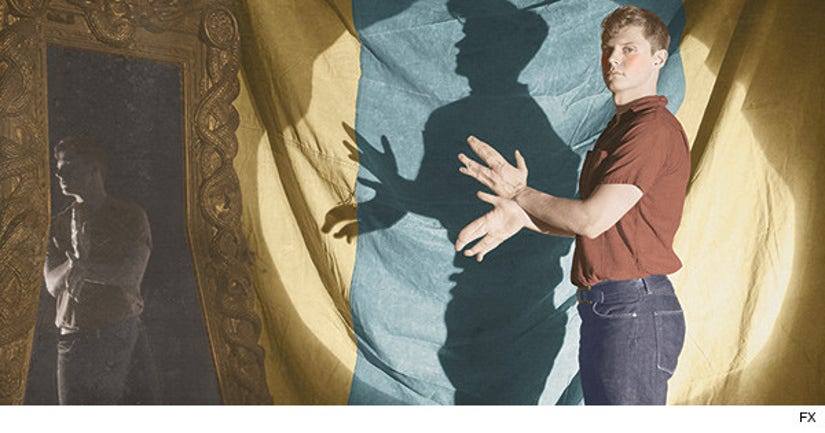 3.) That Sex Scene Was Awkward, But Not for the Reason You'd Expect.

On last week's episode, Evan Peters' character had a breakdown, started making out with Desiree and then used his lobster hands on her ... down there. The two got hot and heavy until she started bleeding.

It was uncomfortable to watch, but how was it to film? 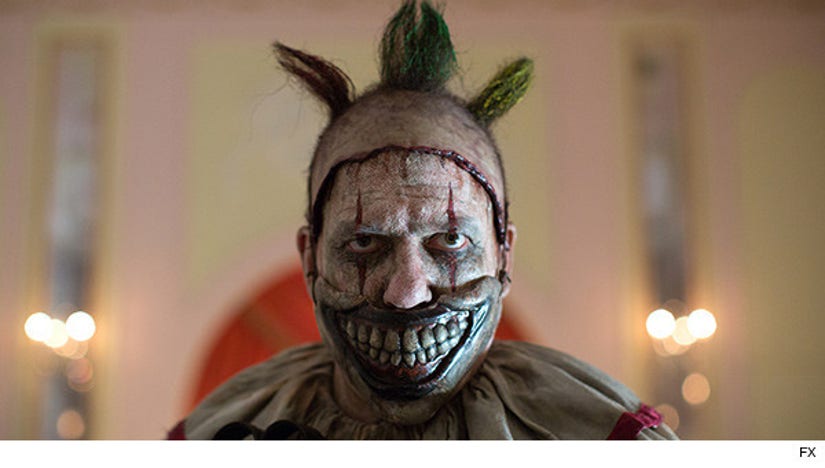 4.) The One Moment That Made Her Sad

"When [Twisty] took that mask off and saw where he put a gun and shot half his face off, with the way the little people treated him, which spurned him on to do that... I didn't like that," Bassett reveals. "That sort of freaked me out, how people treat one another. He's innocent in his mind, so taking advantage of that, that was a lot for me. That was very sad." 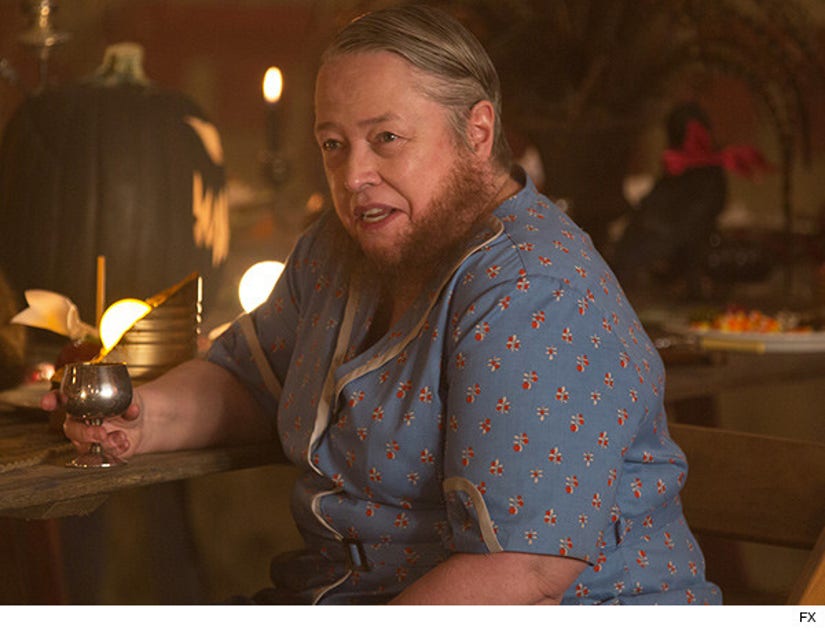 When asked if she thought Desiree and Ethel (Kathy Bates) will become friends, Angela revealed that she has no idea what the writers have planned ... and they have very little say in what happens next.

"We really don't know what's coming in the subsequent episodes or scripts. That's the aspect of this that makes it a little bit difficult or frustrating for us. We don't have input but we might have influence," she says. "We've played it as good good friends, so it remains to be seen. Maybe they'll see that in the writers' room and it'll take them down a different road than they had anticipated. That can and does and has happened in the past, so we'll see."

We really hope for some "Odd Couple" roommate situations between these two! 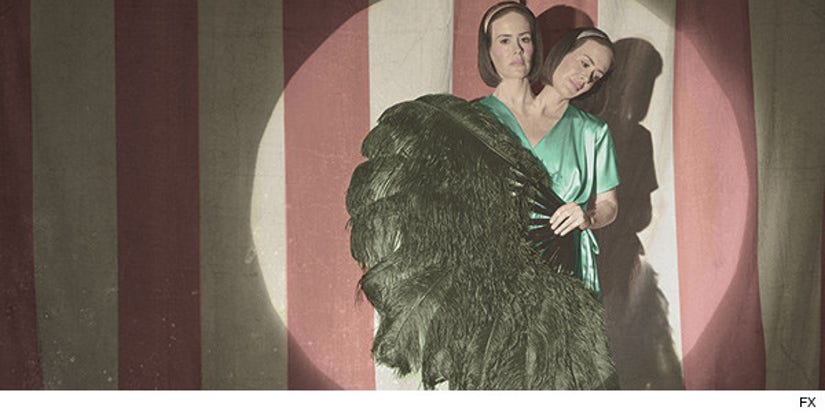 6.) There Are Some Real Clowns on Set

Amid all the craziness, blood and gore on the show, the actors still know how to have fun -- and a few of them really crack Angela up.

"Sarah Paulson can make me laugh really easy and so can Gaby [Sidibe] when she's around. I haven't had the opportunity to spend any time with her this year," says Angela. "But Sarah's pretty funny to me and Michael [Chiklis] is lighthearted and Emma [Roberts] is pretty crazy. Last night, it was she and I til midnight outdoors in the cold and she was pretty funny."

7.) She's Clueless on the Connections

Ryan Murphy recently revealed all four seasons of the show are connected.

"They're all very separate but there's clues every season that we're now telling you how the different worlds are intertwined," he told EW last month.

toofab's Candice Brock asked Angela if she had any ideas how Desiree Dupree or Marie Laveau might be connected in the grand scheme of things -- and that was clearly news to her!

"Not one, nor have I considered it," she said with a laugh. "The only connection I was able to make is Pepper from Season 2 to Season 4, but no I haven't thought about that but it gives me something to thought about," she says. "Sounds like a great college term paper to me!"

Someone somewhere has already started one ... right?