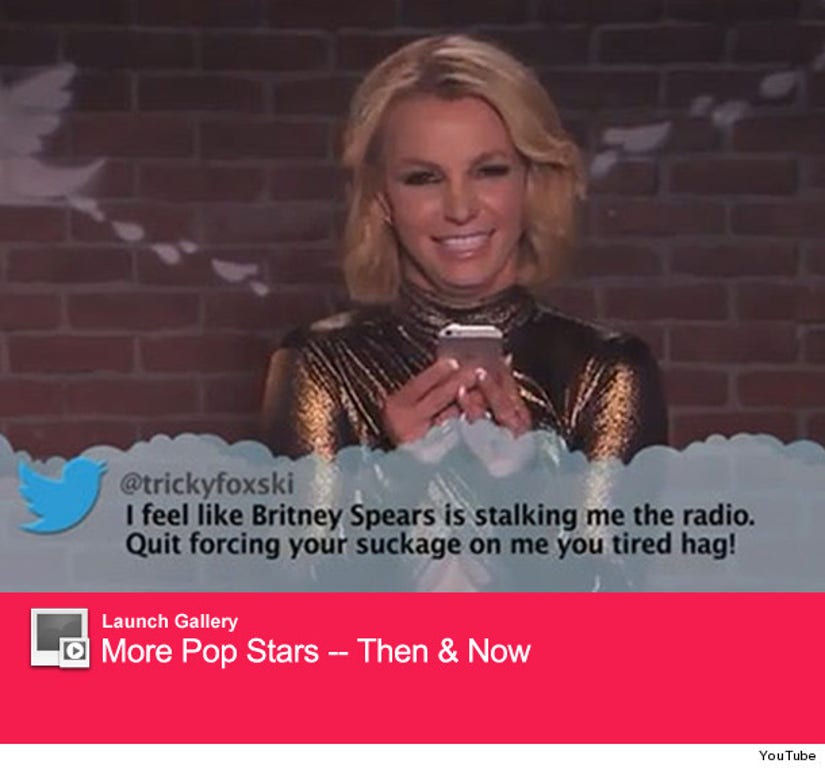 One fan learned that the hard way on Thursday, after an old tweet she sent out about Britney Spears came back to bite her in the butt when it was featured on "Jimmy Kimmel Live!"

The late night host has a recurring segment called "Celebs Read Mean Tweets," where various stars react to some of the unkind things people say about them online.

On Thursday's show, Brit Brit made an appearance, reading a message that said, "I feel like Britney Spears is stalking me the radio. Quit forcing your suckage on me you tired hag."

Well, the pop star's fans weren't too happy about that one ... and they're a very vocal group.

Almost immediately, the Spears army started attacking the Twitter user who sent out the offensive tweet, as her handle was shown on national television.

@trickyfoxski, who preferred to stay anonymous, tells toofab that she was "was shocked and mortified" after she found out her message made it onto TV.

"Initially I thought I had been hacked because I didn't remember writing it," she adds -- saying the tweet was from four years ago.

@trickyfoxski says she only knew her tweet was used after her phone started blowing up.

"That's how I found out what happened," she says. "All of a sudden, I got hit with like 11 mentions. My phone has been gasping for air since. I finally had to turn my notifications off."

And some of those mentions have been pretty brutal.

"The reactions have been entertaining," she continues. "One lovely person suggested that I kill myself. Another charming person said I should rot in hell. The one that made me laugh though accused my family of inbreeding. I guess they saw where I was from and fired off that gem."

"Some of her fans thought it was funny. That, or they felt sorry for me," she adds. "Either way, Britney definitely has loyal fans."

As for her message to Britney now, all she has to say is, "Thanks for laughing!"

Check out the clip above to hear other celebs reading their mean tweets, including Gwyneth Paltrow, Lena Dunham, Chloe Moretz and more!