Warning: Spoilers ahead (and in the video above).

It's a sad, sad day for Pepper fans out there.

We learned, via flashbacks, that Elsa found an 18-year-old Pepper (Naomi Grossman) at an orphanage. The simpleton became Mars' first "monster," as Pepper left with her to join the Freak Show. Pepper actually had it pretty good with the sideshow act. She felt like a mother to Ma Petite and even had an adorable marriage ceremony with another pinhead, Salty.

But when Salty passed in his sleep, everything changed. Clearly depressed, Elsa thought reuniting Pepper with her long-lost sister (played by Mare Winningham) might cure her blues.

It didn't, to say the least.

While Pepper loved caring for her sister's handicapped baby, both her sis and her brother-in-law couldn't stand having the pinhead or their screaming child around ... so the husband found a way to "kill two birds with one stone."

It was actually her sister's husband who killed the baby, with Pepper then getting framed for the murder. Her sister then dumped her at Briarcliff Manor, where Sister Mary Eunice (yay, Lily Rabe!) made it her personal goal for Pepper to find redemption. 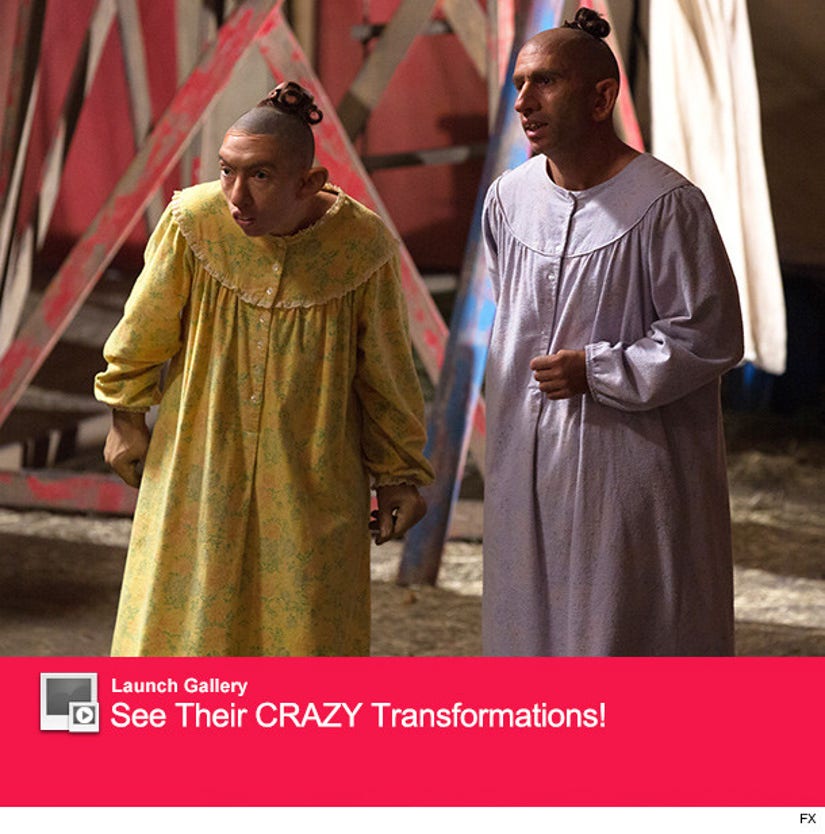 While we'd personally love to see Pepper get some sort of revenge on her horrific sister, actress Naomi Grossman doesn't think we'll be seeing her character again.

"I'm at Briarcliff and there's no Skype in the '60s," she says when asked if that's the end of Pepper. "[But] let's face it, it is 'American Horror Story.' There's flashbacks, there are dream sequences, there are drunken apparitions ... but yeah, it sort of seems so, huh?

"We didn't see her die [in 'Asylum'] and there's all this gossip next season with aliens and she has a relationship there," Naomi conceded. "[But] I doubt it. I think fans are going to feel really satisfied with her story. I don't think they left a ton of doors open. I think Pepper fans can be at peace with the story she's been given and not push it. But shoot, I'd play her forever and ever."

That being said, Grossman would also jump at the chance to be on another season of the show without going through three hours of makeup on a daily basis!

"If given the opportunity, I'd accept it," she tells toofab's Brian Particelli. "A character with hair, my own face, can you imagine? That would be thrilling."

The actress, who did quite an incredible job in "Orphans," says she had no idea how Pepper's origin story would play out until just hours before it was filmed.

"I knew less than 12 hours before we were shooting it," she says. "I'm coming off of four months of stacking chairs and delivering drinks to Elsa so, for me to all of a sudden have an arc and stuff to do ... That was major. All I wanted was some meat, I want something to do in this show ... and I got it!"

And, while we knew from 'Asylum,' that she was at Briarcliff for infanticide, she didn't think this was how it happened.

"As usual, the writers just baffle me. The story that they endowed me with is so much more lovely than even the one I had written for myself," Grossman adds. "I hadn't possibly imagined the story they came up with and I couldn't be more pleased with it!"

Check out the video above to see Naomi's personal message to fans -- and click here to hear all about her crazy transformation to play Pepper.

Are you satisfied with the character's goodbye? Sound off below!