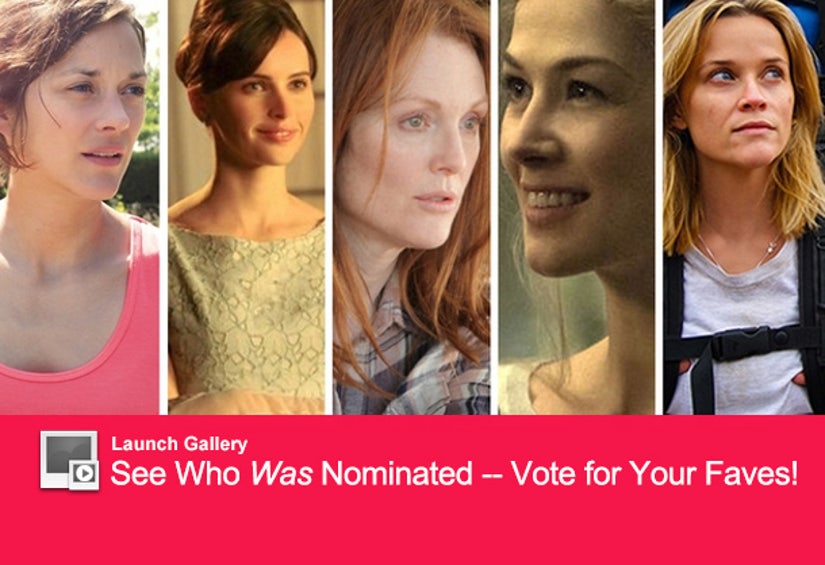 And while stars like Reese Witherspoon, Michael Keaton, Meryl Streep, Emma Stone and Ethan Hawke, all scored their expected noms, quite a few BIG names were noticeably absent.

So, who got was left off the list? Keep reading to see our biggest disappointments.

Although that movie was nominated for Best Picture, the drama's only other nomination was for best song, for Common and John Legend's recent Golden Globe winner "Glory." Neither DuVernay nor lead actor David Oyelowo, who has been getting rave reviews, scored a nom. Carmen Ejogo's work as Coretta Scott King was also MIA.

FYI: The hashtag #OscarsSoWhite is also trending on Twitter.

Amy Adams was left off the list for her performance in "Big Eyes," even though she won the Golden Globe this year. Jennifer Aniston also wasn't recognized for her moving performance in "Cake." Marion Cotillard took their place on the Best Actress list for her role in "Two Days, One Night."

While Rosamund Pike got a much-deserved nod for her role as "Cool Girl" Amy in "Gone Girl," Ben Affleck's name was MIA. Director David Fincher also was snubbed by the Academy, as was writer Gillian Flynn, who didn't earn a nom for Best Adapted Screenplay.

With Christopher Nolan at the helm and award show-friendly names like Matthew McConaughey, Anne Hathaway and Jessica Chastain attached in "Interstellar," the film seemed like it would be a no-brainer for the big categories. Shockingly, it only got technical noms and didn't get tapped for Best Picture.

While "Unbroken" was clearly being promoted as an Oscar contender, the film has been getting mixed reviews from critics and didn't earn Angelina Jolie a Best Director accolade.

There were some big holes in the Best Actor category as well -- "Grand Budapest's" Ralph Fiennes and "Nightcrawler's" Jake Gyllenhaal were noticeably absent. Instead, Bradley Cooper garnered a nomination for "American Sniper," despite being left behind at the Golden Globes.

Another huge oversight was "The LEGO Movie." Everyone in Hollywood seemingly did voiceover work for this blockbuster Warner Bros. pic and it was even talked about as a Best Animated frontrunner -- but it was left off the list. The film's memorable song, "Everything Is Awesome," did manage a nom though.

Director Phil Lord took to Twitter after the nominations were announced ... and his response was just perfect.

It's okay. Made my own! pic.twitter.com/kgyu1GRHGR