Editorial note: This article was originally posted back in June, after Elizabeth Berkley spoke out about the reaction to "Showgirls" when it came out. To celebrate the film's 20th anniversary today, watch her speech above -- and see how the stars have all aged in the gallery below.

Elizabeth Berkley just embraced her "Showgirls" past in a major way.

When the film opened 20 years ago in 1995, it was a huge bomb -- one that the former "Saved by the Bell" star hasn't been extremely open about, until now.

Now 42, the actress made a surprise appearance at a screening of the film on Saturday night in Los Angeles, sending the crowd at Cinespia into an uproar with a heartfelt speech about her work on the film, the "painful" moments after it was released and her appreciation for all the fans who have turned it into a cult classic.

She also perfectly executed one of Nomi Malone's trademark dance moves -- check it out at the very end of the video above!

"I wanna just start this incredible night off by just acknowledging what a celebration tonight is on the heels of such a monumental, incredible win last night. Love wins," she continued, celebrating the Supreme Court's decision to legalize gay marriage.

"I had this huge dream to play this girl named Nomi Malone ... I sought it out, I fought for it, I did everything Nomi would do. Every agent in Hollywood told me, there’s no way you’re gonna get it. They’re gonna give it to so-and-so, so just give up on that dream honey," she went on. "The casting director brought me in and I did my thing. 5 callbacks later and I got it. I had the most extraordinary experience making the film. It was the greatest freedom. When a dream is happening, it's unlike anything you can imagine. Which is why, when the movie came out, it was more painful than anything you can imagine." 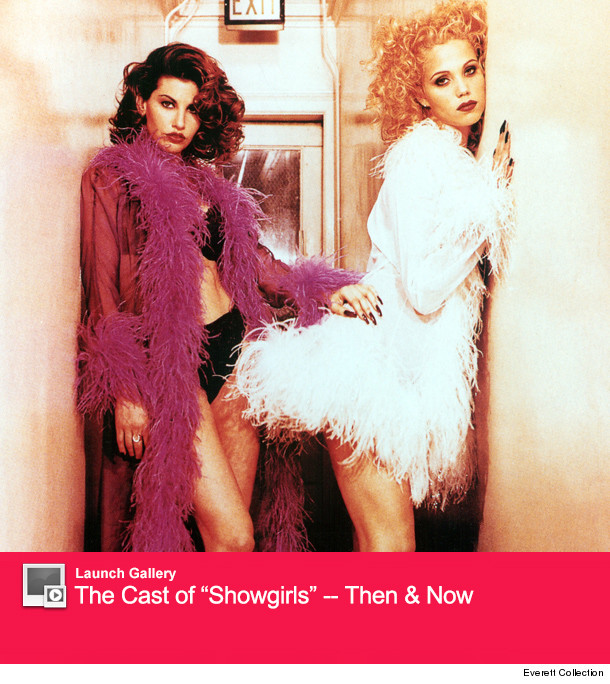 Given an NC-17 rating for its full frontal nudity and graphic depictions of sex and rape, the film only banked $8 million opening weekend and was widely panned by critics.

"While in 1995, it was such a different time when taking risks like that were not embraced. They were laughed at, they were shamed publicly, and to be a young girl in the center of that was something that was quite difficult," Berkley continued. "But I found my own resiliency, and my power and my confidence. Not only through what I had to find out, but because of you guys. "

The film would go on to become a cult classic once it hit home video, and -- according to Elizabeth -- is MGM's highest grossing DVD of all time. For Berkley, attending the screening with so many people who love and appreciate the film was a "full circle moment," and something she wasn't able to experience when the movie first opened.

"I really do want you to know that this movie is something that I love, but I love it because you love it too. Whether this film has been your guilty pleasure, whether you have played 'Pin the Pasties on the Showgirl, or whether Nomi’s plight and struggle has become your own anthem in life. I hope that it’s brought you comfort," she said, getting extremely passionate at this point.

"I hope that it’s brought you joy, I hope that you’ve made incredible memories with your friends watching it cozy on your couch, I hope that you’ve over lined your lips and put glitter on like crazy. I hope that when you eat your french fries, you go crazy like Nomi. I hope that you grab life and go Andrew Carver on its ass. Just know that I love you guys so much and thank you for giving me strength and confidence to become the woman that I am."

Check out the fan frenzy in the video above -- and see what the rest of the cast looks like too in the gallery!