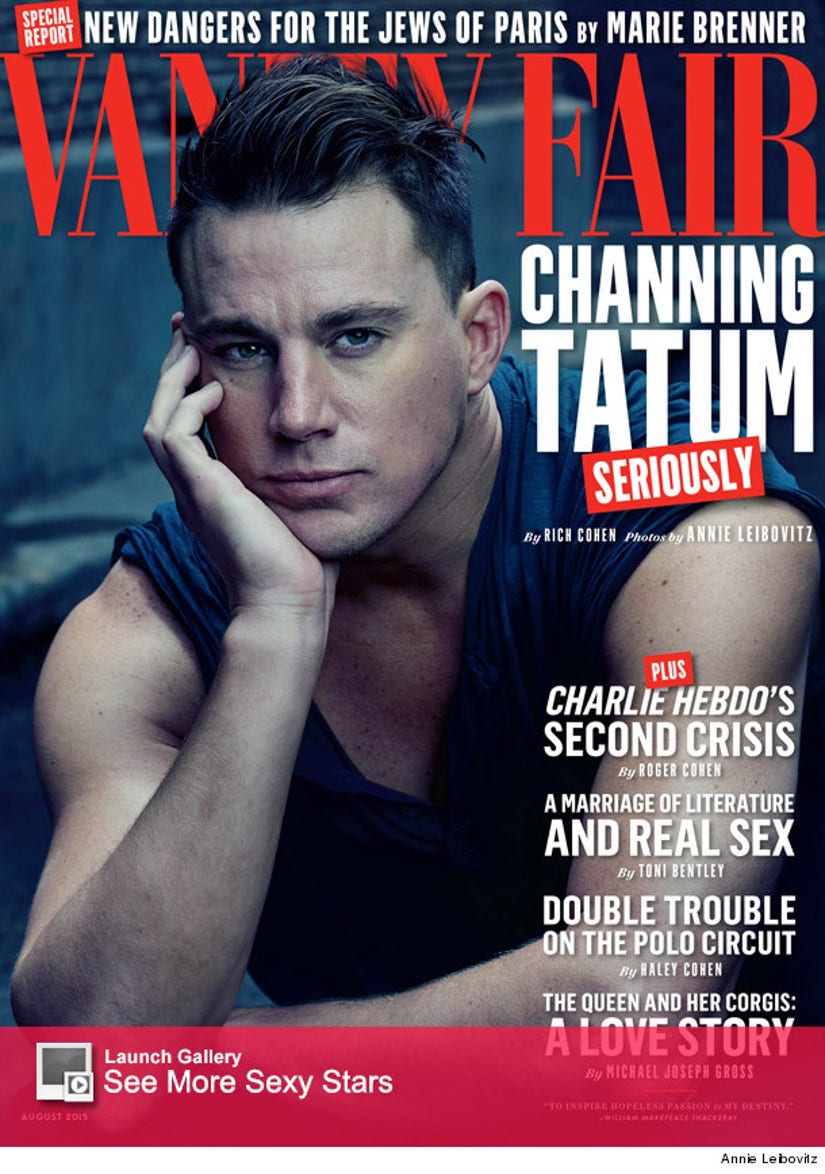 Channing Tatum's not ready to throw in the thong just yet!

The actor covers the August issue of Vanity Fair, where he opens up about his stripper past and gushes about his baby girl, Everly Tatum.

While Tatum's no stranger to stripping on the big screen in both "Magic Mike" and "Magic Mike XXL," the actor also says he wouldn't write off taking the stage again in real life just yet.

"Well, we're going to start a [Magic Mike] show in Vegas, and I'll never say never," he tells the mag. "I wouldn't mind going out there and doing it one more time. Or maybe twice. But, you know, every time I've put on a thong and am getting ready to walk onstage again, I'm like, 'Why do I want to do this?' It's very uncomfortable to be in a thong in front of a thousand people."

And even though the 35-year-old doesn't love wearing the racy underwear, his wife Jenna Dewan-Tatum convinced him to make the thong happen in the sequel.

"That was going to be one of our plot points: To thong or not to thong. But my wife was like, 'You cannot have a movie without these guys getting in thongs,'" he explains.

Channing -- whose real life experiences as an exotic dancer inspired "Magic Mike" -- also says that the sequel will give fans what they missed out on the first time around.

"I think this one is probably more what people wanted in the first film. We just couldn't do it on the first movie. I think we all wanted there to be moments like that in the first film, but the reality of that world is not all giggles and fun," Tatum explains. "We had to let people understand that we knew the world, that it's a real one, not savory at times, at least the one I was privy to."

And when the "Foxcatcher" star's not showing off his hot bod on the big screen, he's cherishing every moment of family life with Jenna and their beautiful baby girl -- noting that the "Step Up" actress is so much "stronger" than he is.

"It was crazy," he tells the mag, while referring to the birth of their daughter Everly in 2013. "You feel helpless. We like to think of ourselves as big, strong men, and we could handle whatever situation. And reality is [that women] are so much stronger than we could ever be. There's a reason why we weren't given that job, evolutionary or whatever. My wife, she's a warrior. She did it as natural as you can. [As a man], you're basically a cheerleader. 'Come on, baby. You can do it.' I would've tapped out in the first."

Channing sounds like he's an amazing husband and father -- what do you think about the actor's candid comments? Sound off below and check out the gallery above to see more behind-the-scenes photos from "Magic Mike XXL"!