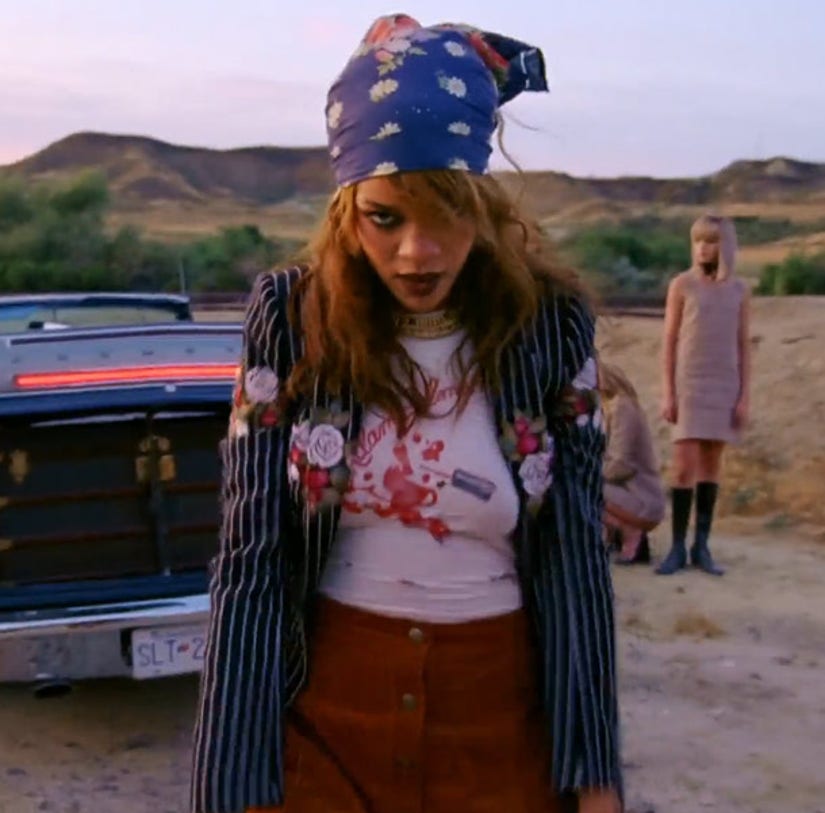 Rihanna started off as the girl-next-door, reggae-style singer from Barbados. But somewhere between her 2005 breakout hit "Pon De Replay" and today's newly released "Bitch Better Have My Money" video, something changed.

She emerged as one of our favorite, boss-ass, boundary-pushing forces in the music industry, performing with a take-no-prisoners attitude that demands attention.

While her new video is definitely her most graphic to date, we've been witnessing RiRi's dark, sexy and scary take on life for a while now.

Disturbia was released in 2007, and although the title is enough to make anyone cringe, the video itself is not as graphic as it could be. This is one of Rihanna's biggest hits, and the video itself has over 91 million YouTube views. In it, Rihanna sports a number of different wigs, changes her makeup several times, and at one point, even appears with a tarantula on her shoulder. The gothic-inspired video was definitely a step in a new direction for the songstress. And how creepy were those white contacts?!

Released in 2010, S&M was one of the first times we saw Rihanna embrace her new, not-so-wholesome persona. For starters, the song is titled after sadomasochism, the type of sexual experience driven by inflicting pain on one's partner, and vise versa. In the video, the now 27 year old ties up reporters and paparazzi as a sort of weird, sexual, painful experience. Sex dolls, gag balls and whips are all front and center. At one point, Rihanna even puts Perez Hilton on a leash. Could this have been her way of expressing her love-hate relationship with the media?

Even though this is technically Eminen's song, Rihanna did sing the chorus and appeared in the super-passionate, super-heated (literally) music video. In the video, Rihanna and the now 42-year-old rapper perform the song's heavy lyrics while standing outside a house as it burns in flames. The video features a couple (Megan Fox and Dominic Monaghan) who obviously has a very tumultuous relationship. Nonetheless, the passion in the green-eyed singer is super evident in this 2010 video... Could she have been singing indirectly to Chris Brown?

Rihanna turns up the heat in this super explicit video. She sings about strip clubs and dollar bills, and even twerks at the end of the video while wearing a skimpy red thong and jean short ensemble. She shows off her signature stiletto nails, dark red lips and a barely-there diamond crop top. And when we say barely-there, we mean she's a millimeter away from a nip-slip. Oh, and the backup dancers are actually strippers on poles… Not that there's anything wrong with that.

1. Bitch Better Have My Money

This is by far Rihanna's most ridiculous video to date. The song is supposedly reflective of last year's lawsuit against her accountant. In the video, Ri Ri is seen entering the ritzy hotel where a man (played by Mads Mikkelson) and his wife live. Rihanna meets the blonde in the elevator, kidnaps her, steals her clothes, gets her drunk, hangs her upside down from a rope (she's topless for most of this) and eventually slaughters her. The end of the video shows Rihanna sitting in a pile of money, covered in blood. This was the first video Rihanna directed, and while we give her an A for creativity, we give her a C for sanity.

What do you think of the video? Sound off below!