Jenelle Evans is ready for a fresh start.

After a string of arrests in 5 years, the "Teen Mom 2" star swears she's turning over a new leaf, after a fight with baby daddy Nathan Griffith and his new girlfriend landed her in jail last week.

The reality star stopped by toofab ahead of her red carpet appearance at the 2015 MTV Video Music Awards on Sunday night, where she opened up about her positive outlook for the future, her relationships with both mom Barbara and son Jace and her new home far from her ex.

"I moved away from where I used to live with Nathan and I'm actually a lot calmer and a lot happier and I'm just happy I don't have to deal with any of his charades anymore," she tells toofab's Brian Particelli.

"It shouldn't have happened," she says of her most recent incident with Griffith. "I told him numerous times not to bring [his new girlfriend] to my house. [My new home] is two hours away from him, so it's pretty far and I don't have to worry about seeing them around town or having another altercation like that."

Now surrounded by friends and family, the 23 year old says her new pad is a lot closer to her mom's place, where Barbara lives with Evans' son Jace. Barb has custody of the 6-year-old boy.

"Currently we're still going through the custody thing, working something out" she tells us.

Barbara and Griffith never really saw eye to eye, but Evans says her mother hasn't been telling her "I told you so."

"She's tried giving me advice and I learn from my mistakes, obviously. Once she let go and everything happened, she was like, 'I'm not gonna sit here and say I told you so, but I'm just gonna say I'm happy you're not with him anymore,'" she says. 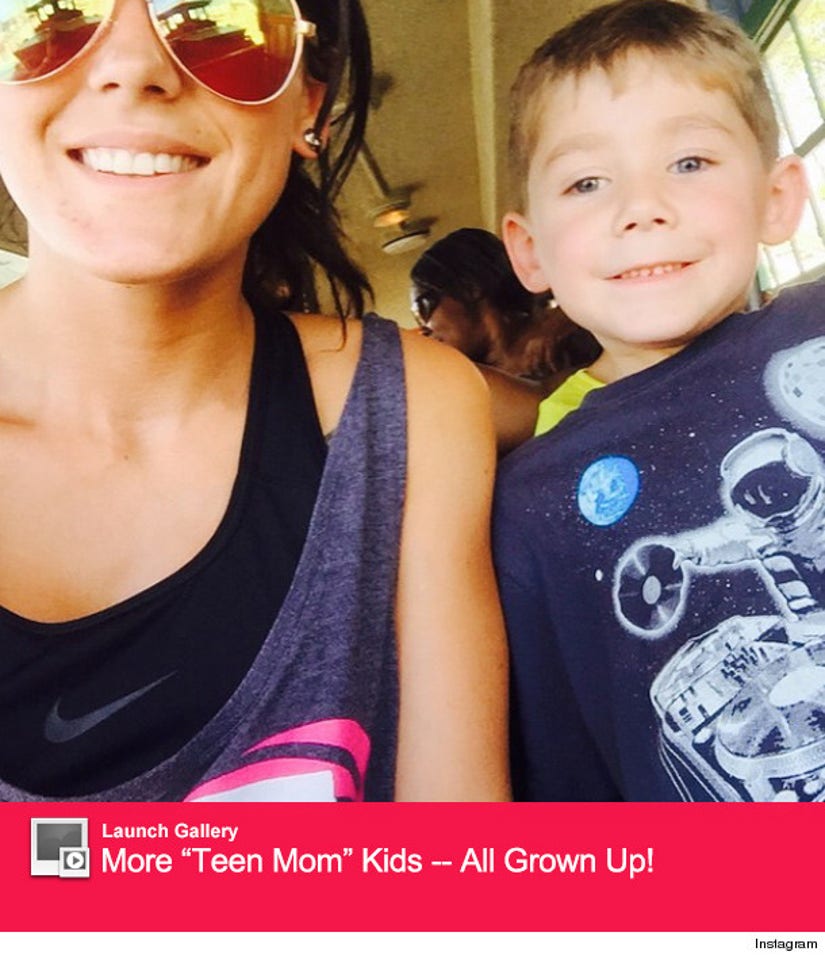 She says Jace is thriving at school and, according to Jenelle, he's "tutoring kids in his math class."

The reality star will make her VMA red carpet debut on Sunday night -- with her mother potentially by her side.

"I'm really excited for them to see that side of me and I'm excited to be attending," says Jenelle. "I'm very happy. My mom got invited, I'm pretty sure she's coming. It'll be crazy for her!"

And while she was an unabashed Kesha fan on the MTV show, she says she really wants to meet this year's VMA host, Miley Cyrus, at the event.

"I still keep up with Kesha, but I've listened to Miley ever since she was on 'Hannah Montana,'" Evans gushes. "I've really liked her as an artist and the music she writes, the lyrics in her music is amazing."

To get red carpet-ready, Evans says she's been working out 3x a week, with focus on her core. Check out the video above to see more about her go-to exercises at the gym.

As for the fans out there who might be concerned about the young star, she has a special message for them too.

"I just want to tell everyone I'm happy, I'm good, I'm calm now," she says in closing. "If I went through everything that I can go through and still graduate with all the drama I dealt with in between, they can definitely do it too!"

We can't wait to see Evans hit the red carpet on Sunday night. We'll be covering the event all evening long starting at 5pm PT -- be sure to come back for all the fashion photos and must-see moments!