Nope ... we still don't know what happened to Glenn ... but, if he does come home, he's got some BIG news awaiting him.

Here are the 5 big takeaways from this week's episode of "The Walking Dead." Spoilers ahead! 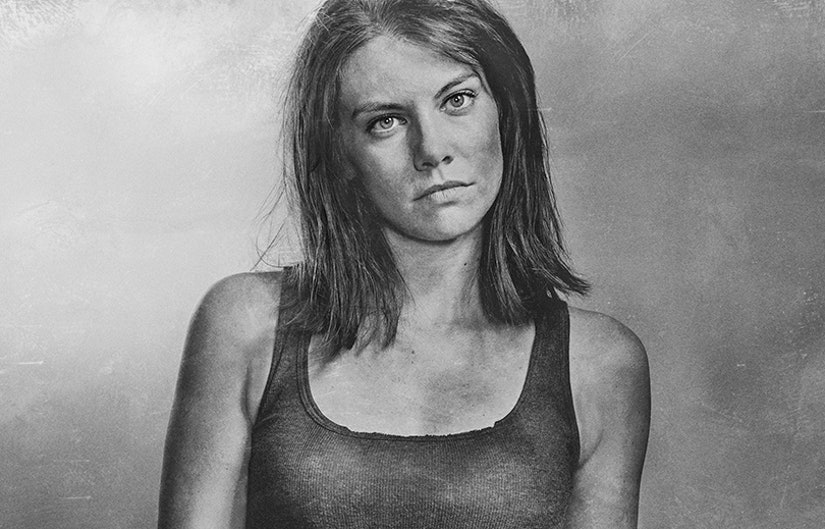 1.) Maggie Has a Baby on Board

This week, Maggie hatched a plan to try and rescue her husband Glenn (whose fate still remains a mystery after he was last seen falling into a horde of walkers). While she wanted to sneak out of Alexandria and find him herself, Aaron caught her and demanded to assist. His desire to help was a sort of penance for being careless and leaving behind photos of the town -- which the Wolves found and used as intel for their attack.

After encountering some nasty ass walkers in the sewer, the two trek on -- before realizing their escape plan is hopeless once they see a horde of zombies waiting outside the sewer grates.

"It's OVER," Maggie then tells Aaron, having a breakdown. "I burned his last picture of me, because I said he wasn't gonna need it anymore because I was never gonna be away from him again. I'm pregnant. He didn't want me to go out there and he said yes and if I would have gone, if I was with him, maybe I could have helped him."

This is the first we've heard of her pregnancy, something which also happens in the comics. At this point, we see Maggie losing faith.

"I dont know if he's alive. He would have shown me by now, that's what Michonne said. I just want to see his face. I can't. I don't get to know what will happen, why it happened, what I did right or wrong," she cries.

After so much loss already, it's another heartbreaking moment for the character -- but the episode ends on a positive note. We last see her going to a wall covered in names of fallen Alexandrians, where she begins to wipe off Glenn's name. Aaron joins in and erases Nicolas', telling her "When he gets back, it's worth mentioning Aaron, Erin, works for a boy or a girl, depending on the spelling. Just saying."

Do you think Glenn will ever learn he's going to be a father? Maggie believes he'll be back -- do you? 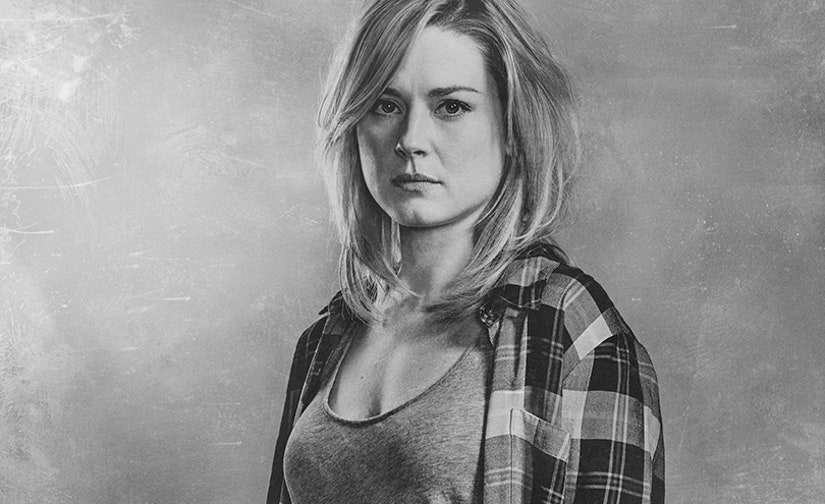 2.) Rick Gets His Groove Back

The episode ends with Sheriff Grimes finally gettin' some, as we see him get hot and heavy with the widowed Jessie.

We've definitely been seeing this coming, but it was a great payoff after seeing Jessie taking Rick's "If we don't fight, we die" mantra to heart.

All episode long, we saw Alexandra Breckinridge's character come to terms with what life is really like now, as Jessie really started becoming a fighter. Not only did she take out a zombie on her own, she also gave her fellow Alexandrian's a much-needed pep talk about taking charge. It's clear Rick found this attractive -- and we're oh-so-thrilled to have another strong female in the making on this show!

Do you think this pairing will last for a bit? In the comics, Rick is shacked up with Andrea -- who is far more compelling in the source material than she was on the show -- could Jessie fill that void? 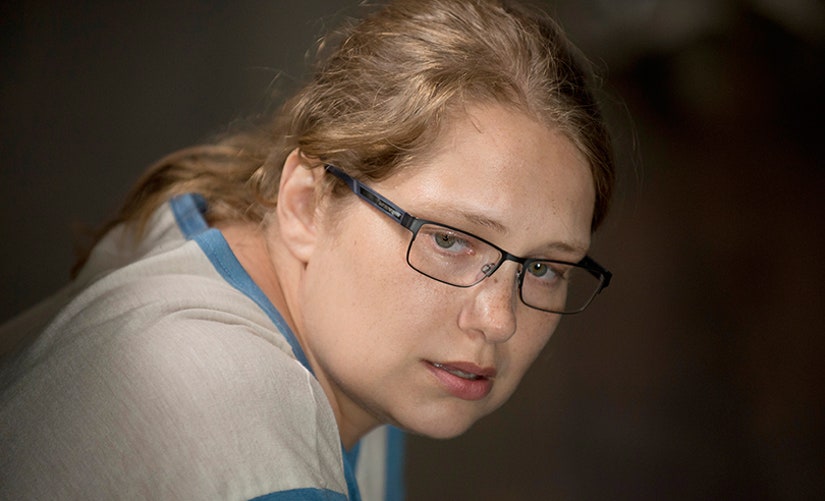 While we really thought Denise might end up with Eugene after their cute moments together earlier this season, it looks like Tara may be more her type.

This week, Denise is still stressing out about being the only doctor in town, as she hasn't had quite the amount of training someone in her position should have.

"Here I am, clueless on the floor," Denise tells Tara when she stops in to check in her. "I'm so scared about what's going on in here, I can't think about what's happening out there. I just want him to live and for the roamers to go away and for a doctor to show up at the gate so I can go back to my apartment and read 'War and Peace.' But here comes the end of the world."

"He's not dead yet," Tara say of her patient. "It's not like I don't feel it, being afraid sucks."

Apparently, that was the talk she needed -- as she keeps reading her medical journals and finds out how she can actually help the man under her care. She later tracks down Tara, gives her a big kiss on the mouth and says, "Being afraid sucks."

Was that a kiss of gratitude or something more? Tara was the show's first openly gay character, do you think she's getting a new love interest? 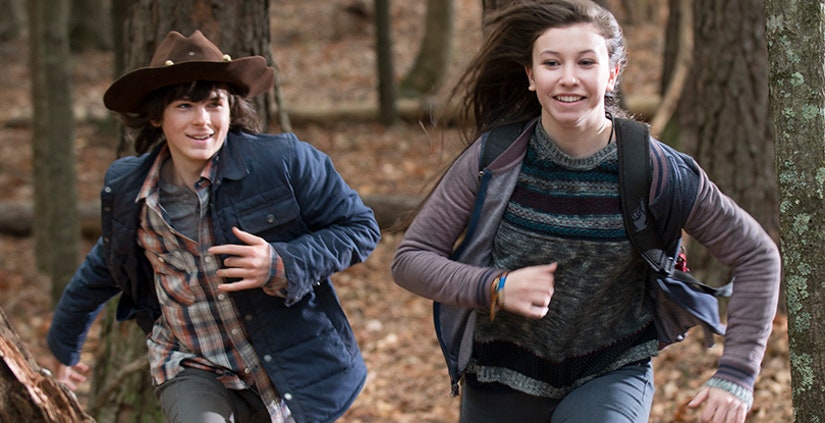 4.) Young Love Rules for Carl Too

The Carl/Ron/Enid love triangle raged on this week as well, with Rick's son on a mission to find out what happened to his mysterious paramour after the Wolves attacked town.

Ron tells Carl that Enid was his girlfriend and he warned her about going over the wall. "I told her there's bad people out there and it's stupid and dangerous," he says. Carl is still determined and the two come to physical blows ... somehow, Carl wins.

Ron then breaks down what will happen if Carl tries to find Enid on his own.

"I'll tell your dad, he'll try and find you, others will go, someone will die," he says ... and, we have to admit, that sounds pretty accurate. Later, Ron fills in Rick on his son's plans, telling him how Enid used to sneak over the walls and they never really knew why.

Do you still think Enid is one of the Wolves? There's gotta be something big behind this mysterious character, right? 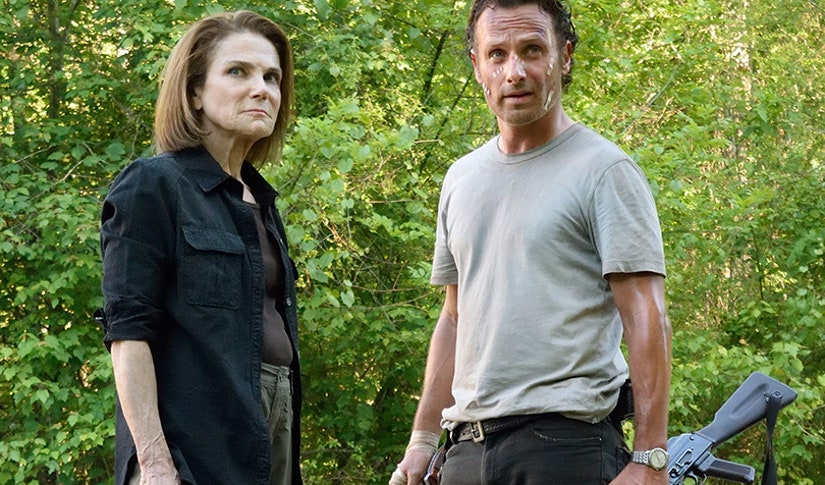 5.) Deanna & Spencer Have Major IssuesClearly still in shock from the recent events in her once-peaceful town, Deanna spends the beginning of the episode out of it.

She later has a moment of clarity though, once again feeling optimistic about their future and jotting down a ton of plans on how to make Alexandria a sustainable and self-sufficient community. We see her blueprints for farming, local government, energy ... it all looks pretty solid.

"Dolor Hib Tibi Proderit Olim," she writes on them -- a Latin phrase meaning "Be patient and tough, someday this pain will be useful to you."

She then catches her son stealing booze from the rations, after he stopped an all out raid on their pantry earlier in the day. The drunk Spencer says a run on the food bank would doom them, but one person taking won't be the end of the world. He then goes off on her.

"You're the reason we're so screwed," he shouts. "You made us this way. We were never safe here, but you didn't want to see that, you didn't want us to see that. You just wanted to dream. What happened to dad, to Aiden, that's all you."

Deanna later takes out her frustrations on a lone walker inside city limits, stabbing the crap out of his throat with a broken bottle. Rick finishes him off, as she tells him she wants to live and she wants Alexandira to "stay standing."

She tells him he needs to lead them, as he tells her her lofty dreams for the town were not just "pie in the sky."

The episode ends with her banging on the fence, taunting the walkers surrounding them. As she walks away, we see something leaking through the wall -- is it blood? Either way, a hole in the fence can't be good -- could another assault on Alexandria be near?

That's it for this week. On a scale of 1-10, how screwed do you think the town is going forward? While Deanna clearly has some great plans for the community and Jessie is getting everyone on board with finally manning up, there are still some weaknesses (Spencer, that hole in the wall) -- and you're only as strong as your weakest link, right?

Also, when do you think we'll finally find out what happened to Glenn? And where was Carol this week?! Sound off below.