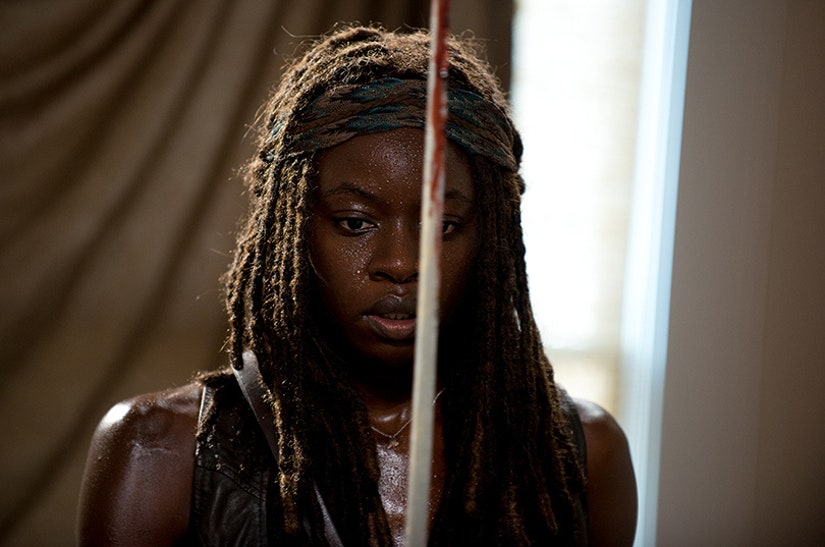 We've come to expect some nasty surprises from our mid-season finales of "The Walking Dead" -- and tonight, the show definitely delivered. From shocking deaths (RIP Deanna) to new character introductions (NEGAN!), let's dig into "Start to Finish."

We pick up moments after the tower fell, knocking down the town's wall. Rick quickly gets into zombie shooting mode, with Deanna following, guns a blazing. While fighting off walkers, she cuts herself on a saw blade. They meet up with Michonne, Carl, Gabriel and Ron, before getting saved by Jessie to hide out in her home.

Once there, they discover that Deanna has also been bitten. We all saw this death coming as soon as she gave her amazing plans for Alexandria to Michonne last week. Looks like she'll live on through the community's future ... she just won't be there to see it.

Ron once again attempts to assassinate Carl, but Rick Jr. isn't having it. The two get into a big fight, attracting walkers to the home. Carl later covers for Ron, before taking his gun away from him. "I get it, my dad killed your dad, but you have to know something: Your dad was an a--hole," Carl tells him, ever so bluntly. BURN!

Later, Rick almost hatchets Deanna in the head after she crawls over to Judith's bed to see the baby one last time. Whoops ... she's still alive. She gives Rick letters to give her son, Spencer, and Maggie. "They're all your people, Rick," she tells him. "I didn't run over there to help you because I like you ... I ran over to help because you are one of us, that's the right answer," she tells him.

Rick then remembers that if they cover themselves in walker guts, they can walk to safety undetected. Random aside: Why don't the survivors ALWAYS do this? The whole Glenn issue could have been solved if they never left town without smearing some undead goo on their bodies first.

Elsewhere in Alexandria, Carol and Morgan have a standoff over the wolf he's been hiding in the basement. She wants to kill him and will take out Morgan too if she has to. He doesn't want anyone else to die. He knocks her knife out of her hand, and then he knocks her out. As this is happening, the wolf uses Morgan's own bo staff against him and gets free. He takes Denise hostage, gets Eugene, Tara and Rosita to hand over their guns and walks out with the medic at gunpoint.

As for Maggie, she's seen climbing to safety, much like Glenn atop that garbage bin. Glenn and Enid watch the destruction happen from afar. He wants to go help them, she seems hesitant. "People are still alive in there," he tells her. "This is how it happens, and it always happens Glenn," she says. "You want to run away, be afraid, forget about this, just go, but that's how you lose people," he tells her, after telling her Maggie is pregnant.

We also found out who was heard saying "Help" on the walkie-talkie, as Eugene was seen trying to talk to Glenn on one. Mystery solved!

The last shot of the episode shows Rick, Gabriel, Michonne, Carl, Judith, Ron, Jessie and Sam walking out of Jessie's home, covered in gut ponchos. As they walk down the stairs, Sam keeps saying "Mom, Mom ..."

Hope you stuck around after the credits though, because a prologue shown during "Into the Badlands" revealed a MAJOR tease for next season. If you changed the channel, check it out below:

In the brief clip, Sasha and Abraham come across a gang of bikers.

"Your weapons, your truck, the fuel in your truck ... the floor mats, the maps, stash of emergency napkins in the console, none of those things aren't yours anymore," one of the men tells them. "Your property now belongs to Negan!"

Fans of the comics will know Negan is a Big Bad, meaning a lot of terrible things are in store for our survivors when the show returns. Jeffrey Dean Morgan was recently cast in the role -- though he was not seen in this brief clip.

Going into the second half of the season, here's what we're left asking:

1.) Where are Rick and the gang walking to in their gut-covered ponchos? It's clear they all want to make Alexandria work, but they're going to need somewhere to hold out for the time being.

2.) What is that Wolf's plan with Denise? Think he's planning to bring her back to the rest of his people, so they can have a medic around?

3.) Will Carol and Morgan ever be able to put their differences aside? Carol definitely has some more weight to her side of the argument now that that wolf kidnapped one of their own.

4.) Which one of Jessie's kids is going to completely go off the rails first? Ron has tried to kill Carl multiple times now -- do you think he'll ever succeed in at least injuring him? And Sam just does not seem fit for this world. Him calling for his mommy as they walked out of the house could lead to his death sooner than expected -- the walkers would definitely be drawn to that, right?

5.) When will we see Negan? Comic spoilers below, stop reading now if you don't want to know what could happen.

In the source material, Negan and his men provide "protection" to surrounding areas in exchange for everything from food and supplies to sex, sometimes forcibly. His introduction leads to the death of one of the original characters, which we have a feeling they'll save for the season finale. We'll have to see him before then though, right?

Either way, we can't wait for that!

What did you think of tonight's mid-season finale? Let us know in the comments below.

"The Walking Dead" returns on Valentine's Day 2016 -- and we can't imagine a better way to spend the holiday. See you then!