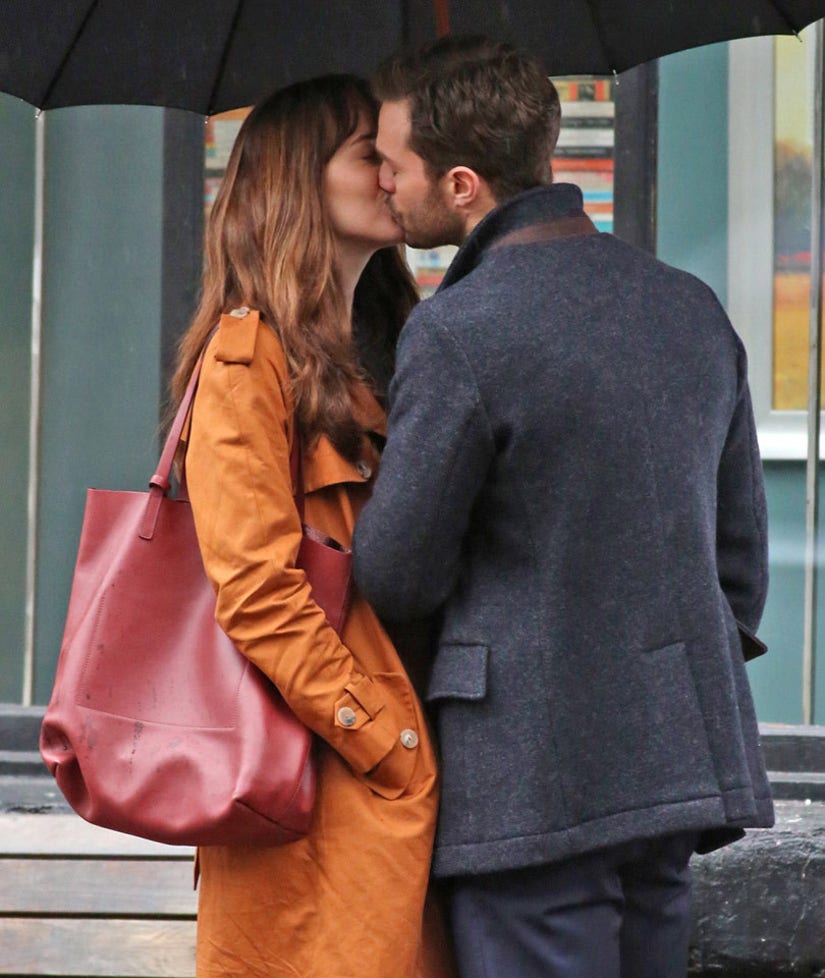 Dakota Johnson and Jamie Dornan are currently filming "Fifty Shades Darker" -- and we're getting our first look at the on-screen couple steaming up with streets of Vancouver.

After "Fifty Shades of Grey" ended with Dornan's Christian Grey and Johnson's Anastasia Steele parting ways, it seems they rekindle their romance in the highly-anticipated sequel. In the first pics from the set, Christian is spotted kissing Anastasia as they cuddle under an umbrella to hide from the rain.

The actress looks cute in a yellow trench coat as her billionaire beau is dapper as ever in a perfectly-tailored blue suit.

"Fifty Shades Darker," which is set to hit theaters on February 10, 2017, sees the S&M addict continuing to wrestle with his kinky side, as he wrestles with lingering trauma from his complicated childhood. Fans will also see a conflict rise between Anastasia and Elena Lincoln, Christian's business partner and former lover (played by Kim Basinger).

Judging by these first photos, we know we're in for some spicy sex scenes. And if Dakota gets her way, we'll get to see all of Jamie this time around!

"I'm going to make him get fully naked in the next one," she recently told host Andy Cohen on "Watch What Happens Live." "Everybody wants to see the D! The Dornan D. We should start a movement -- a campaign."

Last year, Jamie told Variety that showing his genitals in the movie was something that was never even discussed with director Sam Taylor-Johnson.

"They were privy to everything, just not my manhood," he told the mag, adding that he wore skin-colored "satchel" while filming sex scenes in the flick.

Are you excited to see these stars in action again? Sound off below!