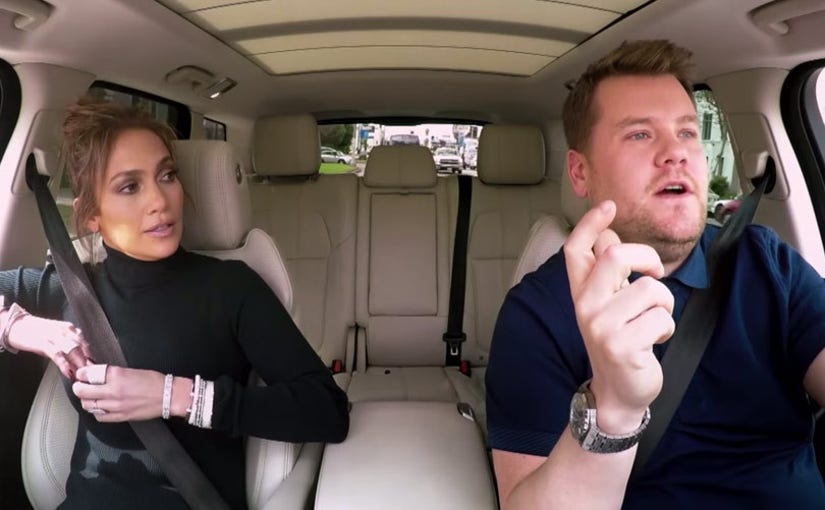 Jennifer Lopez is the latest celeb to take a spin in James Corden's "Carpool Karaoke" ride -- and he even included one of her famous friends!

After belting out some of J.Lo's hits, including "Jenny from the Block" and "Booty," the late night host asked his guest about which A-list pals she has in her Rolodex.

It turns out, the pop star has the phone numbers of some of the biggest stars -- Demi Lovato, Chris Brown, Bradley Cooper, Iggy Azalea, Dwayne "The Rock" Johnson, Cristiano Ronaldo, Leonardo DiCaprio and more.

Corden proceeds to text "The Revenant" star (wouldn't you?!), writing, "Hey baby, I'm kind of feeling like I need to cut loose. Any suggestions? Let me know. J.Lo, you know, from the block."

"I'm not going to let you send that!" the "Shades of Blue" star said with a laugh. But before she could stop him, James sent the text.

"I love that he wants you to cut loose. This guy is the best," James replied.

VIDEO: Sia and James Corden WIG OUT During Carpool Karaoke

During their ride, the actress also talked about her personal life, revealing that she's been married three times and has gotten five wedding proposals.

"I've had some amazing proposals," the mother-of-two revealed. "I've been married a couple of times I'm still trying to get it right."

"I don't want to compare one to the other, they were all pretty spectacular, they were nice," she added. "And there were some that asked me to marry me that were good, but I said no."

Check out the clip above to hear more from J.Lo and to see these two in action -- trust us, it's worth watching the whole thing!