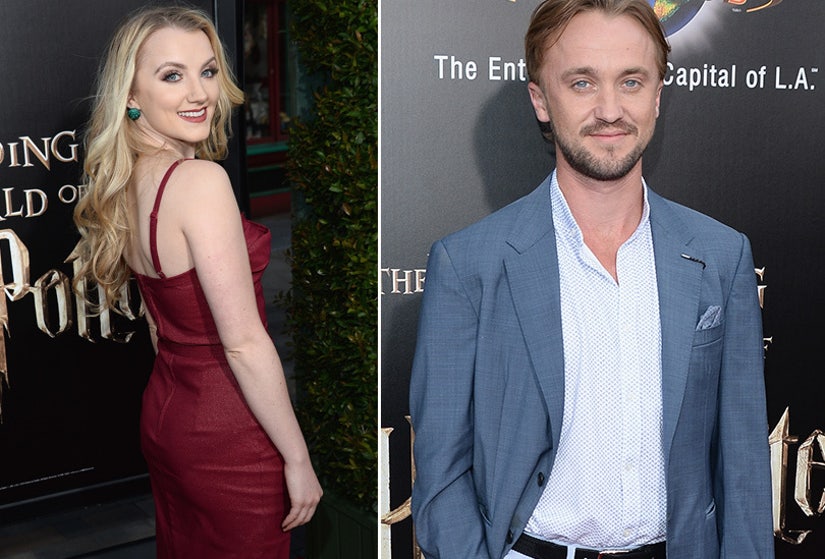 Hollywood's Wizarding World of Harry Potter opens to the public on Thursday - but the celebs got a sneak peek Tuesday night!

Evanna Lynch, now 24, who played Harry's whimsical friend Luna Lovegood, was ravishing in a figure-hugging red dress, which she matched with deep red lipstick. She paired the look with leopard print flats.

46-year-old Warwick Davis, beloved for his turn as Professor Flitwick, snazzed it up in a faintly gleaming navy suit. James and Oliver Phelps, a.k.a. Fred and George Weasley, stayed with the blue theme - though they had us doing double-takes now that they're no longer redheads. Tom Felton, who played Harry's rival Draco Malfoy, arrived and brought some dubious hair choices with him as well.

Legendary composer John Williams, 84, who scored the first three "Harry Potter" movies and whose themes persisted throughout the rest of them, stepped out to conduct the L.A. Philharmonic, which played his work as fireworks exploded behind the recreated Hogwarts Castle.

Famous fans of the Wizarding World also put in appearances at the party as well. Mindy Kaling, star and creator of Hulu's "The Mindy Project," flaunted shining tight black pants and a matching blazer as she posed with a magic wand (not a euphemism). Billy Bob Thornton, 60, also attended with his wife Connie and rarely-seen 11-year-old daughter Bella, who is clearly a Potterhead! And Vanessa Hudgens, 27, hit the red carpet in voluminous black pants that provided a fun clash with her white crop top.

Along with that staggering Hogwarts Castle, the Wizarding World of Harry Potter - whose Florida version opened its doors in 2010 - gives fans a chance to stroll around the books' Hogsmeade Village. They'll also be able to settle in with a Butterbeer, chow down at the Three Broomsticks pub, and sample the candy collection over at Honeydukes. There's also a Zonko's Joke Shop.

On top of roller-coaster Flight of the Hippogriff, named for the eagle-horse hybrid creature that plays a pivotal part in the books and movies, there's also a 3D ride, Harry Potter and the Forbidden Journey.

Click Launch Gallery to see the stars at the opening, and if you're in reach of L.A., swing by the park yourself after April 7th!