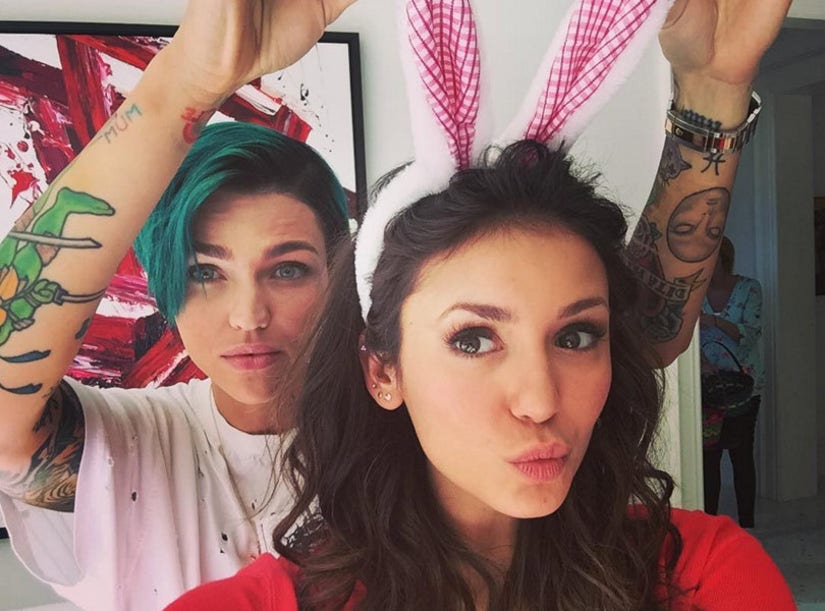 Nina Dobrev and Ruby Rose may have one-upped the prank war between Ellen DeGeneres and Matt Lauer!

The battle started when Dobrev pretended to attack the model as she entered a trailer on the set.

"Got her!" the "Vampire Diaries" alum said in the clip below. (Warning: Ruby spews out a ton of curse words in the video!) "Going to have to wash your mouth out with Soap Missy."

"When your friend is an a--hole..." Rose wrote in response. "Also obviously she edited me to say those awful things and OBVIOUSLY I HAVE AN INNER SUPER BOGAN I thought I left behind.."

Ruby later took it up a notch by taping pictures of herself all over Nina's trailer.

"When you go to say hi to @ninadobrev but she has 100 photos in her trailer of you and it's awkward because you're trying to be professional.. #seekhelpnina #evillaughofastalker #wherestheshinetoo #ineedextrasecurity," she captioned the video.

Dobrev seemed to love her pal's retaliation -- she couldn't stop giggling as she saw the photos.

"After I scared the crap out of her last week, she retaliated back," she explained, catching her fans up on their antics. "In true Narcissist fashion. By covering my entire trailer with photos of herself. Stay tuned y'all. The war has begun... #ScareWars Watch your back Rose... Watch your back. @rubyrose #XXXtheMovie."

Rose showed off her handiwork in her own social media video, adding Radiohead's "Creep" for a funny effect.

"@ninadobrev trailer... Wow.. This must be her head every night when she falls asleep." she joked.

"RUBY!!!! Hahah the music is a nice touch," Dobrev replied. "Oh, it's on. Get ready #TeamDobrev ... About to wreak havoc on @rubyrose #ScareWars."