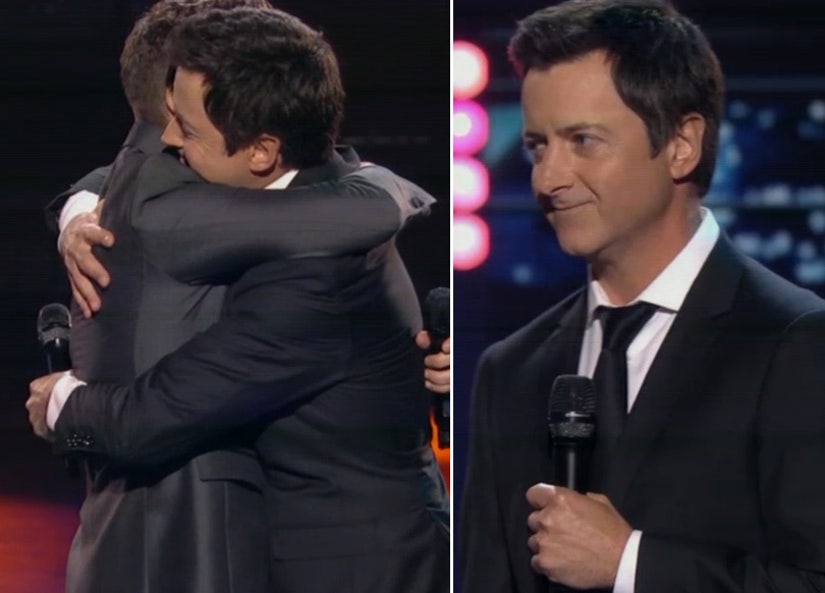 It's been 14 years since Brian Dunkleman has shared the "American Idol" stage with Ryan Seacrest -- but he returned for the grand series finale on Thursday night.

The former co-host, who left the show after its first season, popped up moments after Ryan walked out on stage.

"Well, well, well, Seacrest. Looks like after tonight, you're gonna be out of the job," Dunk joked. "And trust me, nobody knows the pain of life without 'Idol' more than me. Don't worry buddy, being unemployed, it's not that bad."

"I just wanted to stop by and congratulate the show for struggling along for another 14 seasons without me," he continued. "There's something I've been waiting to say for you ... you've done an amazing job hosting this show all these years. I congratulate you on all the success!"

He really meant it ... and the two then shared a hug onstage.

We're sure he's only one of many familiar faces who will pop up as the show ends its 15 season run on Fox.

Dunkleman opened up about why he went MIA from the competition show in an essay for Variety this week.

"Did I quit? Did I get fired? All these years later, I still don't know for sure," he mused in the piece.

"I probably beat them to the punch. I wanted to have an acting career, and I knew that leaving when I did would give me the best shot of accomplishing that. Still working on it," he continued. "But the undeniable truth is, I just didn't have the wisdom at the time to handle what was happening. Do I regret not remaining on the show now that it's coming to an end? Yes. Especially when I open my bank statements. But without the benefit of hindsight, I would have done the exact same thing."

See more former "Idol" stars in the gallery above!