In a new sneak peek of Wednesday's "The Ellen DeGeneres Show," the comedienne hilariously opens up about being named the number one celeb who should run for President of the United States in an online poll.

Though Ellen sounds flattered, it doesn't sound like that's a position she ever wants to hold. Check out the clip above to see where GOP and Democratic frontrunners Donald Trump and Bernie Sanders placed in the poll!

"I don't know if you realize this but there's a crazy Presidential race going on. Have you heard?" she opens her monologue. "On one side, we have a strong, experienced, powerful woman and on the other side we have -- wow, my mind is ... I've gone blank I can't remember who is on the other side."

"Anyway, I don't talk a lot about politics on this show, but somehow this is happening, someone told me about a new poll that came out on a website called Ranker.com. There's a ranking of 50 celebrities people think should run for President, and I have been voted number one," she says in the clip. "Thank you and not interested. That sounds like the worst job in the world to me."

DeGeneres also joked about her runners-up, which included Samuel L. Jackson, who came in second, and Oprah Winfrey, who came in ninth place. 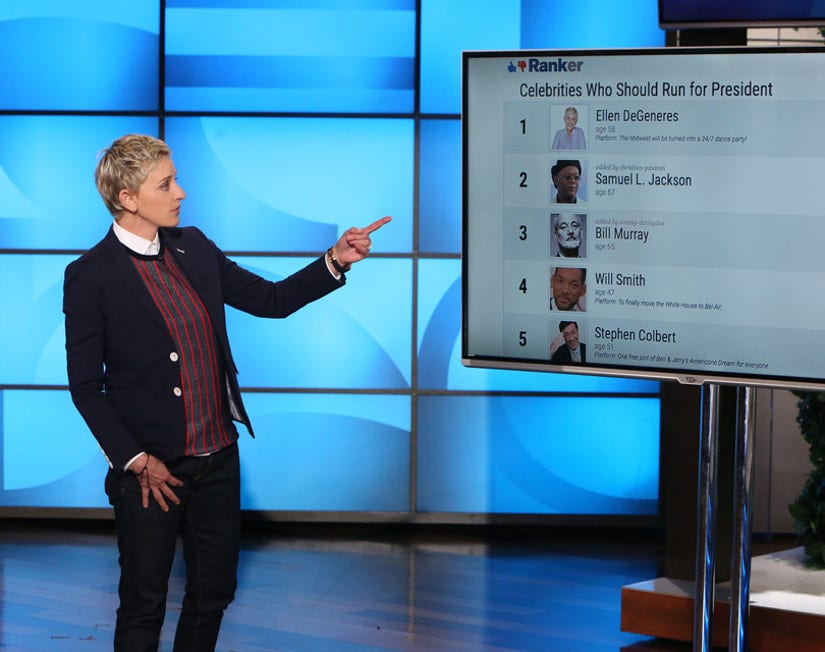 "And boy I don't want to talk about who I beat, but let me tell you who I beat. Oprah is number 9," she reveals. "I know, look she doesn't want it anyway. She'd have to move into a smaller house. Donald Trump is number 26," she continues. "Oh, now I remember who else is running for President: Bernie Sanders."

While Ellen says she has zero intentions of ever running for office, she does have a few pretty great ideas.

"I'm honored that people think I should run for President. Portia I think would make a beautiful First Lady and I love private planes so that's appealing to me," she jokes. "But I have no political ambition. I have a few ideas about how to make life better for people. Like, for instance, if I were to be President I would close the gender pay gap."

"I would also have every gas tank on the same side of every car so you never have to guess which side it's on," she adds. "I'd get rid of the Republican party and the Democratic party and I'd just have one giant pizza party."

We're kind of loving Ellen's ideas for the country -- what do you think about her hilarious monologue? Sound off below and check out the gallery above to see more stars who are out in Hollywood!