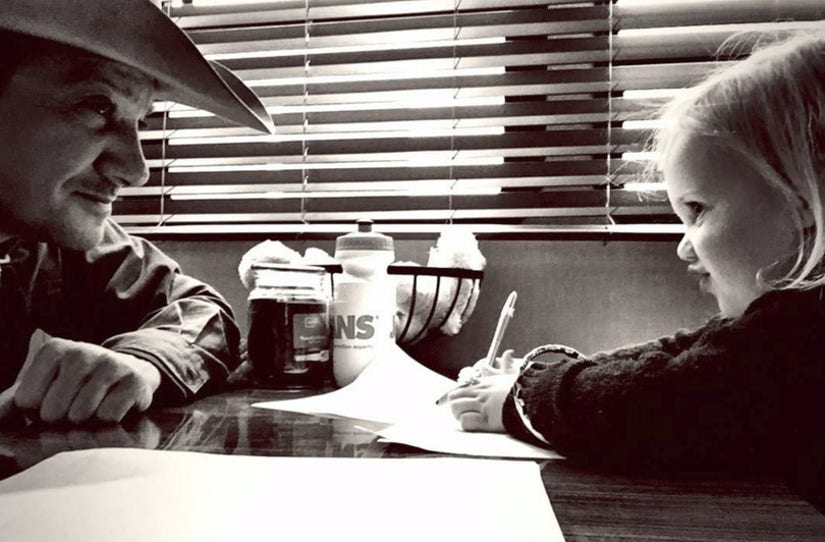 Get ready to say "Awwww," because this Jeremy Renner interview is adorable.

The "The Hurt Locker" star and two-time Oscar nominee couldn't conceal his joy as E! spoke with him about his daughter Ava at CinemaCon this week.

At the mention of an impossibly cute Instagram post from last week, in which he and Ava are "having dinner" in his trailer during a shoot, a huge grin broke out onto his face. "The best thing's being a dad," he said.

Despite the occasional Insta foray, though, the 45-year-old is careful to keep the spotlight on his family pretty dim. "I still don't expose my baby's face," he said, "just to protect her - or anybody in my family's face that's a minor."

"I just think that's not my decision to make," he explained, "blast - you know what I mean? You don't need to be world-famous because your jack*** dad is."

It's understandable that Renner would be leery of too much media focus on his family: his ten-month marriage to model and babymama Sonni Pacheco collapsed into divorce last year.

But, the relationship did make him a dad, and "That's the most important thing in my life."

Renner, who swung by CinemaCon to plug "Story of Your Life," was pretty clear, though, that he has no showbiz ambitions for his three-year-old.

Though "she's definitely artistic," Renner said, it may be "a little too early" to tell if there's a burgeoning actress there.

"I'd love to steer her away from that," he conceded, "but I'll never say no."

You can catch Renner as the super-bowman Hawkeye in "Captain America: Civil War," out May 6th!