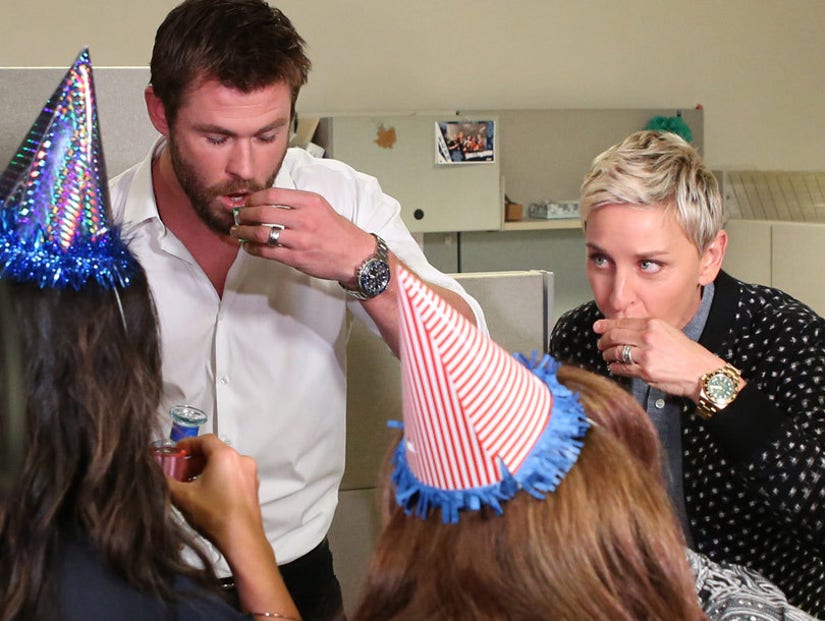 In honor of National Administrative Professionals Day, Chris Hemsworth gives a fan the surprise of her life!

"Since Chris Hemsworth plays an administrative professional in the new 'Ghostbusters' movie, I invited him to go surprise some people who work hard—very, very hard—every day," Ellen DeGeneres explains to the audience.

Cut to footage of Ellen and Chris plotting out their big surprise!

"Let's sneak. Duck down, 'cause there's a door. Lower. Lower. Just lower! We don't want them to see you," the talk show host directs the actor, who proceeds to glide across the floor on his elbows. "Lower. Just a little bit lower. OK, let's go."

The pair then pops into one woman's cubicle -- and her reaction is priceless.

"No, we're not," Ellen says. "Happy Administrative Professionals Day." "Oh, my God!" she replies. "This is amazing!"

"We knew that you like Chris because I snoop around at night. I do a lot of cleaning at night," Ellen says as the camera displays several magazine photos of Chris. "He's going to actually take care of you today since you're so used to taking care of other people. So, have a seat. He's going to massage you."

Chris gets to work on her neck, asking her if she wants him to use oil.

The two then pretend to take off their clothes for a "naked" massage, which is interrupted by the woman's curious co-workers.

After the rubdown, Ellen and Chris take a tequila shot with the entire office.

Check out the clip to see them in action!

Hemsworth isn't the only star who Ellen enlists to prank unsuspecting fans.

Kobe Bryant does a hilarious skit with DeGeneres in his ear while talking to an esthetician about sweating to much -- watch the video above!