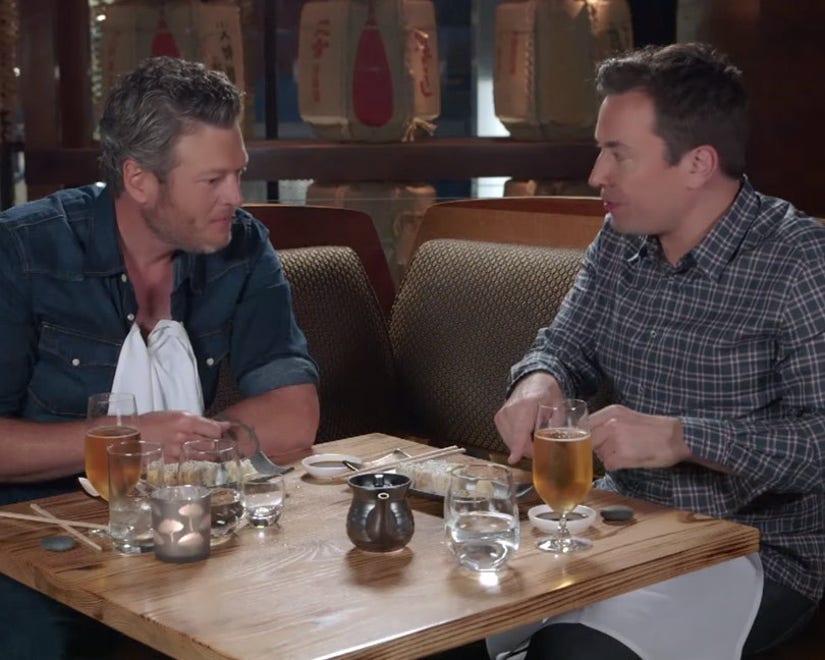 Blake Shelton needed a whole lot of sake to get through this meal!

The country crooner got over his fear of sushi and tried it for the first time during a night out at Nobu with Jimmy Fallon -- and the duo brought a camera to document the hilarious moment.

The late night host started his guest off on some sake. "It's rice wine," he explained before asking his pal what it tasted like.

After trying pickled ginger, Gwen Stefani's main squeeze started in on some nigiri, which he said "looked like human tongue."

While the tuna didn't look edible at first, Blake said, "The texture is Play-Doh, but I will say this, man to man, I like how that tasted."

However, he wasn't thrilled on the next course of sashimi. "Can we get more of that rice wine?"

The guys got even more adventurous by sampling shirasu, jumbo prawns and uni.

Shelton was a very confused about the sea urchin, joking to the waitress that she said "gonads" while describing the dish.

After some thought, Blake took the shot like a champ, while Fallon could barely keep it down!

"C'mon, you don't want to be that guy," the singer teased.

Check out the video to see the final mystery course -- Blake definitely earned this treat!