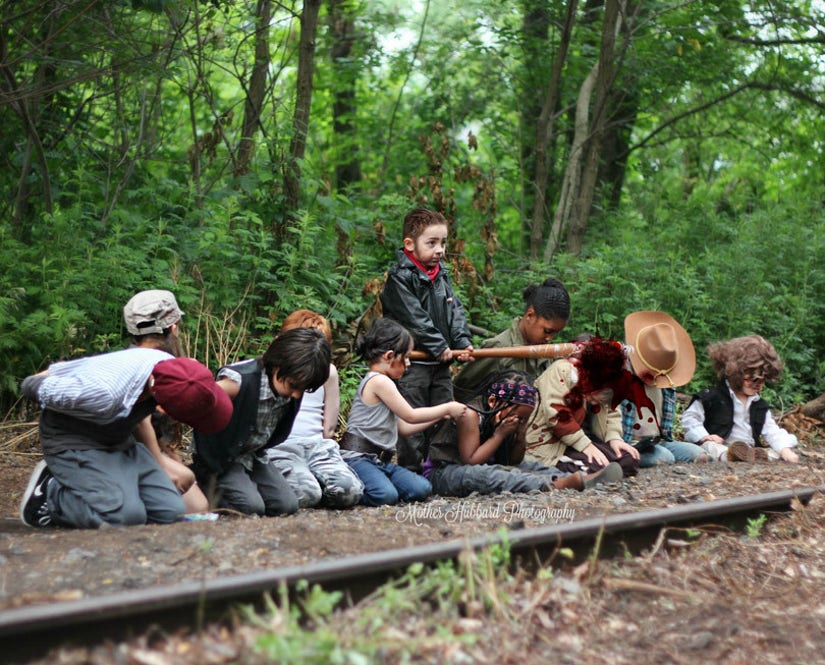 UPDATE: Facebook has restored some of the banned photos.

"The photo was removed in error and restored as soon as we were able to investigate," a spokesperson for the site tells toofab. "Our team processes millions of reports each week, and we sometimes get things wrong. We're very sorry about this mistake."

At this time, the two photos specifically mentioned below were allowed back on the website, but others have since been taken down. It's unclear when or if they'll be allowed back up.

Alana Hubbard was just trying to create a fun photoshoot involving her kids and her favorite television show ... but the results left her banned from Facebook and fighting off hundreds of angry commenters.

The New Jersey-based photographer went viral over the weekend when she started posting the photos above, showing a group of children dressed up as characters from "The Walking Dead." The tots -- including Alana's own son and daughter -- are seen recreating some of the series' most memorable moments, including Carol shooting Lizzie in the head and Negan preparing to bash in someone's brains with his barb wire-wrapped baseball bat.

Other scenes involve a mini-Sasha laying on top of a pile of walkers and a pint-sized Rick Grimes brandishing a gun alongside a fake bearded Jesus.

At the time of publishing, the main photo gallery has been liked over 35k times on Facebook, with a ton of comments about how "cool" and "freaking awesome" the idea is. But, not everyone has been as kind.

"For the most part, all of the kids were my clients or my kids friends or neighbors, I just wanted to get the community involved," Alana tells toofab. "I knew it would be popular, because it's 'The Walking Dead,' but I did not expect it to be THIS huge or this controversial." 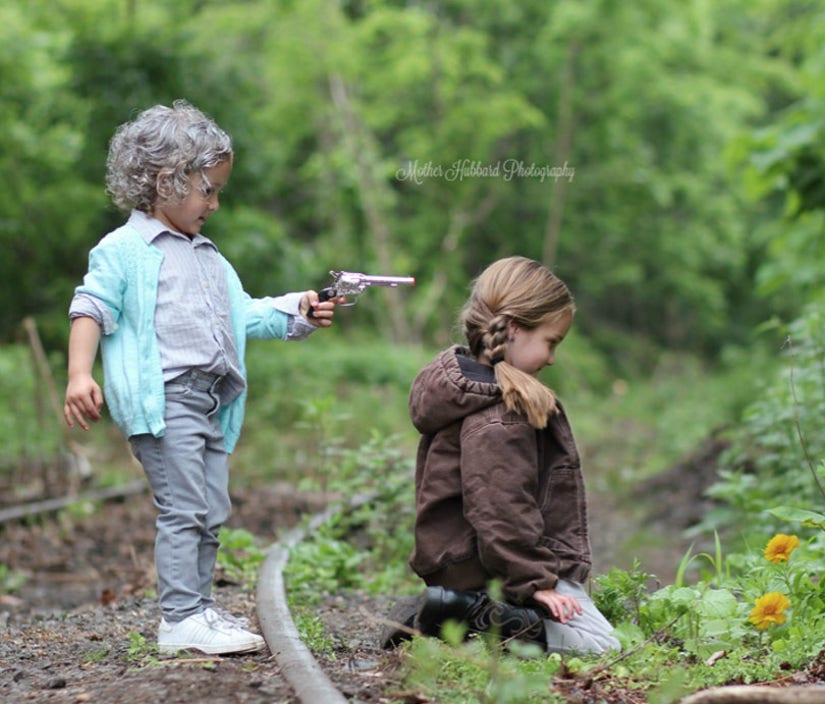 Hubbard says she's been getting the most comments about the photo above, showing her daughter dressed as Carol.

"The photo of Carol and Lizzie has over 7,000 likes. 7,000 likes and then 1,000 comments of people telling me I'm raising a serial killer and my 3-year-old daughter's a 'bitch,'" she explains. "I had to delete photos of actual dead children, people posting on my page, saying people like me caused this."

Hubbard tells toofab that none of the children involved in the shoot have ever seen the show and were told to just "play pretend" when it came time the take the photos. All blood and zombie injuries were added in Photoshop afterwards.

"We just said, for today, you're gonna pretend to be Rick and you're a police officer and you protect everyone," she explains. "For [the kid playing] Negan, we were like, 'You're the bad guy, you gotta get them!'"

"They had no idea about the show, but they just had fun. They just had a blast. No one wanted to leave," she continues. "Sometimes the kids were having so much fun playing, when it was time for their individual shot, they almost didn't want to stop playing. For a lot of the pictures, we asked them to be serious or scared, and they're laughing. No one was hurt, no one was injured."

Despite disclaimer warnings on the album, her posts and even a graphic content warning blur from Facebook itself, Hubbard has been attacked via comments on her business' page and over the phone.

"The messages that I'm receiving on my Facebook page, the phone calls, it's ridiculous. People are saying I'm a 'stupid, psycho bitch,' 'What kind of piece of s--t mother' am I, 'What the f--k's wrong with you, putting a gun to her head?' Just the most horrible things you could say about a mother," she tells us. "For the most part, I've been trying to be the bigger person and just ignore it, but some of it, I just can't."

It's gotten harder for Hubbard to respond to or delete comments from her haters though, as she tells us Facebook actually blocked her from posting for 72 hours. Alana says she was confused after two photos were removed from the site for violating their standards. While she understood why the Negan one above may have been pulled, the other was this pic of Daryl trying to ride away from a horde of tiny zombies on a comically small Harley: 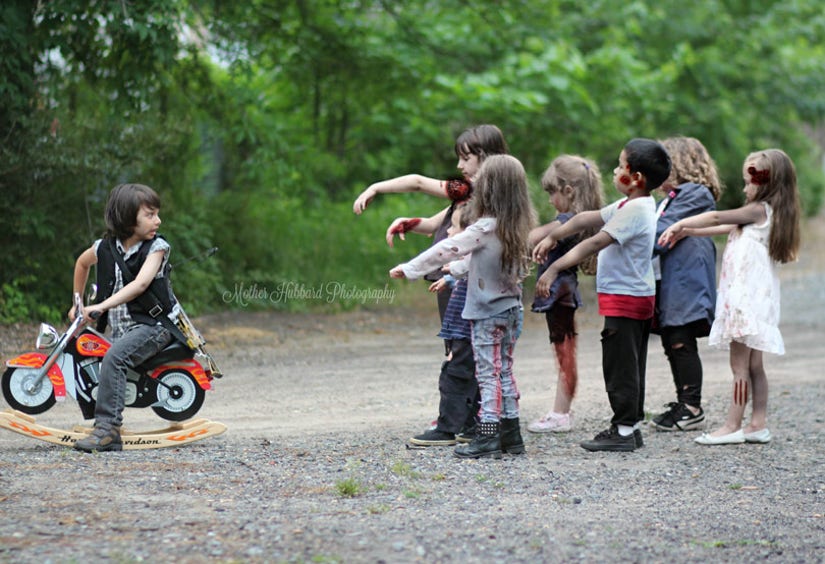 "How does that possibly violate any standards? There's no weapons in the photo," Hubbard exclaims. "I thought it was a possibility that it was an accident it was deleted, so I reposted it and a couple hours later they blocked me out of my Facebook and told me I'm banned for repeatedly violating community standards for reposting that photo of Daryl."

"I have to sit idly by as people harass me and call my daughter a 'bitch and' a 'future serial killer' and 'psycho' and slander my page," she adds. "On top of that, I'm a photographer and travel agent, so not being able to respond to the positive messages is taking money out of my pocket."

We asked her if she had a message to her haters, since she can't post one on her Facebook page at the moment. Here was her response:

If you're going out of your way and viewing my photos, don't come crying to me when you don't like it. There's no reason for anyone to be upset with me. The blood is fake, the kids injuries are fake, the guns are fake. They're toys from Toys r Us. If it's unacceptable to photograph kids with them, they should stop selling them in stores then, because that's where I got them from.

I don't see the controversy. I didn't create the poses, all I did was reenact something that's already been seen by millions of people on TV and the Internet. Why are people more upset about this than seeing an actual child on TV get shot in the back of the head [on the show itself]. I honestly don't get it. Beyond that, the bottom line is, if you don't have anything nice to say, don't say it. I understand that it's not for everyone, not everyone likes zombies, not everyone likes the show, I get that. But you didn't have to look at it. That's on you. I wasn't doing this to go viral, I've already been there. I just wanted to take pictures of my kids and their friends. I don't understand and I never thought it would be this big and this controversial and I don't understand it.

Check out the full shoot above -- what do you think? Sound off below! 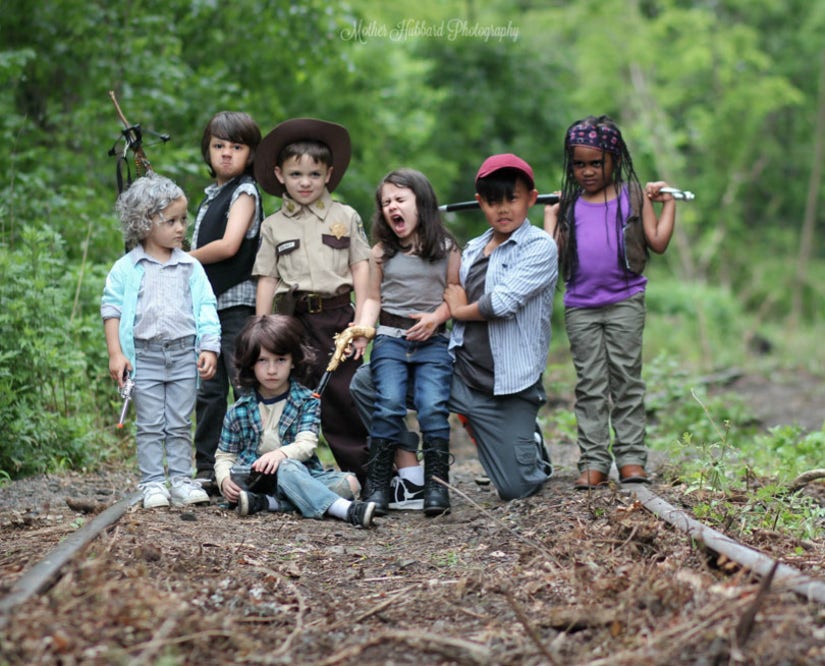