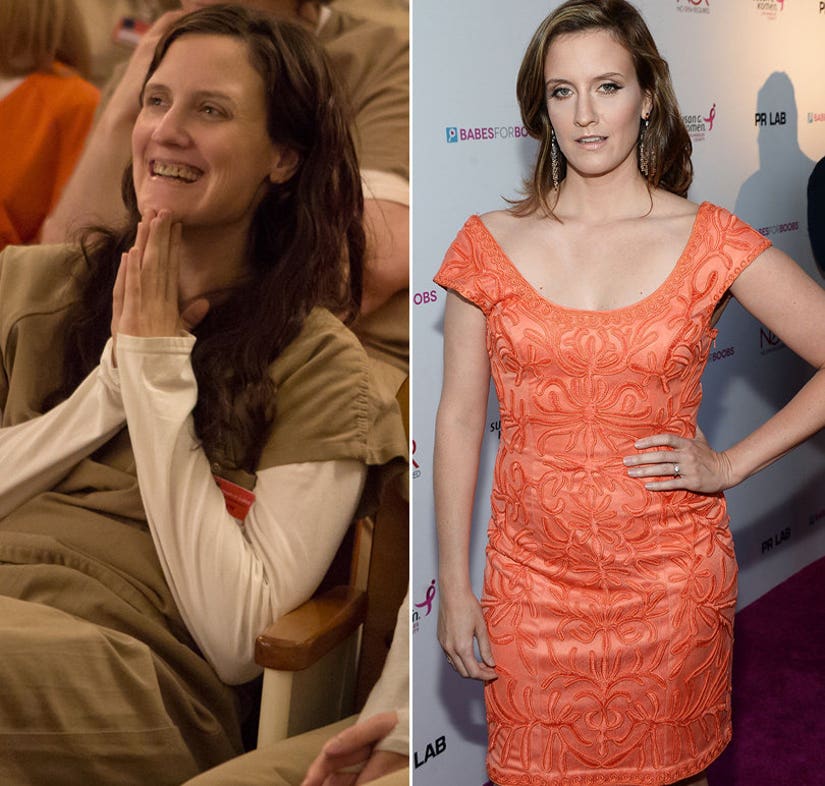 Warning: This post and the accompanying video contain MAJOR spoilers about the fourth season of "Orange Is the New Black," currently streaming on Netflix. Read on at your own risk!

Julie Lake wishes it took a lot longer to make her look like a meth head.

The actress currently stars as scene stealer Angie Rice on the prison series, and is one of the show's locked up ladies who looks very different outside of walls of Litchfield Penitentiary. That being said, her transformation doesn't take as long as you'd think.

"I wish I could say it takes three hours to make me look hideous, but its probably like .. the makeup alone is 2 minutes and the hair is 20," Lake tells toofab's Brian Particelli of her quick make-under.

The secret: those nasty chompers!

"It's amazing how hideous you look with bad teeth," she tells us. "I remember the first time they did it I looked in the mirror and smiled and burst out laughing. It was just endlessly amusing to me at first. The teeth [are] really fast. They have a palate of colors that's like tobacco stain, nicotine, coffee, dark greens, yellows and browns, it's disgusting. Then they just paint it on, it's like 30 seconds tops, let it dry and good to go." 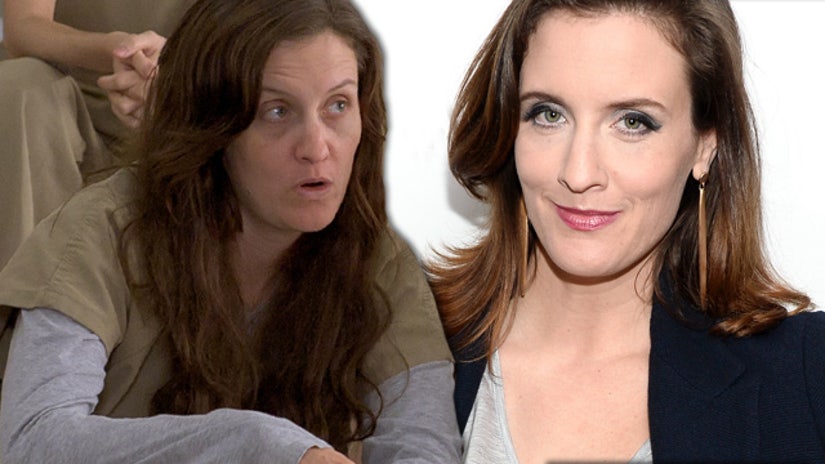 The appearance disparity between Angie and Julie might be part of why she doesn't get recognized in public as much as some of her costars. On one particularly embarrassing occasion, Lake says a fan actually asked her to play photographer for the girl as she posed for pictures with the rest of the cast.

"But then when I don't want to be recognized, I am," she laments with a laugh. "I remember when Season 2 came out, I was working as a waitress and doing a Sunday brunch, totally covered in sweat in a gross apron. Somebody spread the word I was on the show and everyone wanted to take a picture of me. So I'm like, in my apron. 'Look how glamorous it is to be an actress, here's your eggs.'"

Another not-so-glamourous moment for Lake: finding out her character would be unveiled as the Shower Pooper during Season 4. After some serious investigation, it's revealed that Angie sneaks drugs into the prison by kissing her boyfriend, swallowing the narcotics and then sifting through her own ... well, you know ... later.

"I remember laughing a lot when I found out, but I was also a little embarrassed," she says of the big reveal. "I gotta be even more disgusting now? Come on!"

There was a plus side to the situation though. The actress' real-life husband got to appear on the show as Angie's beau!

"When they were casting that part, they were like, 'Do you have a friend you want to make out with? We don't want to give you a random extra in case you're uncomfortable.' I brought my husband, so now he's in the show and he created a whole character for himself, he calls himself Bison, he hopes they'll bring him back. He's not an actor [but] he's so proud of his celebrity appearance."

If her character ever gets a backstory, there's hope he'll be woven in. And, speaking of Angie's past, we almost got a glimpse into it this year.

"I got a fake out in Season 4," Lake says, explaining that the writers initially told her we'd learn some of her Angie's history. "Then they were like, 'Oh, sorry, there's not going to be a backstory.' My character isn't involved in the major plot lines, so all the people who got backstories, they wove into the greater story. I don't take it personally."

Here's where we enter MAJOR spoiler territory, so don't keep reading unless you've finished all of Season 4.

The second-to-last episode ends with a heartbreaking shock, as Poussey (Samira Wiley) is accidentally killed during a protest. After a season spent exposing the harsh realities of the prison system, this is the last straw -- as the inmates all riot during the finale cliffhanger.

"I was very shocked when I read it, I didn't believe it," Lake says, reflecting on Poussey's death. "I remember being like, 'She's not actually dead. They're gonna bring her back in episode 13.' I remember asking people if it was real. Everyone was really emotional filming that scene, it was very sad for the entire cast."

She was kind of right, we did get more Poussey in Episode 13, but only in flashbacks.

"We all love Samira, she's family to us," adds Julie.

Check out the video above to see how she thought fans would react to the death -- and learn a little about the backstory Lake created for her character.

"Orange Is the New Black" is currently streaming on Netflix.