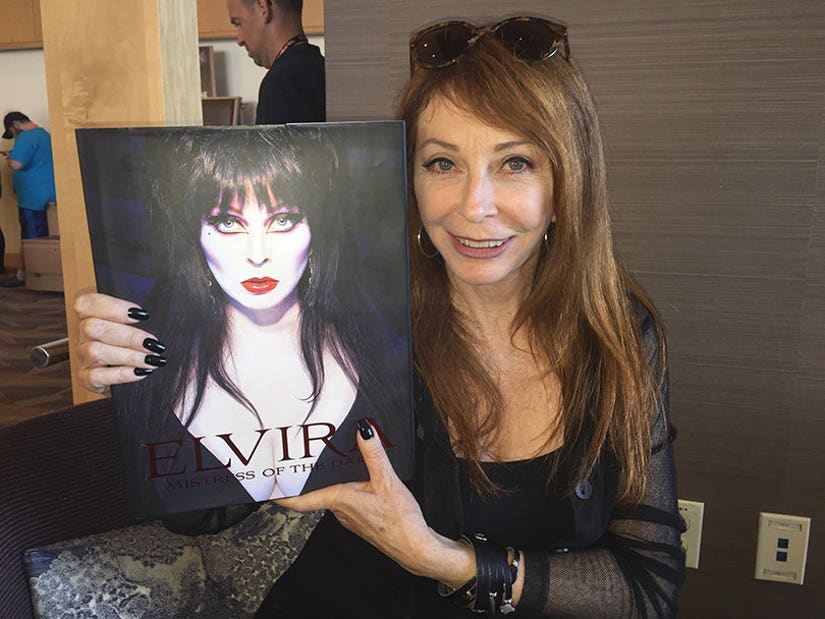 Elvira is taking a look back at her 35 years in the biz.

Cassandra Peterson first donned the character's now-trademark costume back in 1981, and has been seen sporting it for TV, films, pinball machines, comic books, conventions and anywhere else that will have her ever since.

To commemorate the milestone anniversary, Elvira has teamed up with Tweeterhead for a 240-page coffee table book filled with over 300, never-before-seen photos and commentary from the star herself. The book will drop October 5, ahead of Halloween 2016.

We caught up with the Mistress of the Dark's red-head alter-ego at Comic-Con this year, where the stunning 64-year-old talked about some of her most famous -- or infamous -- photoshoots, the insane fan devotion to her character and what her daughter thinks of her mama's crazy life.

Keep reading for more -- and click here to pre-order the book!

toofab: Can you even count how many San Diego Comic-Cons you've been to over the years?

Cassandra: Yeah, I was trying to get up to date on the way here. I was going through photos on my phone looking for my oldest Comic-Con photo ... but, unfortunately, it was before they had computers! I have been coming to this since, oh my God, whenever it first started, the early eighties.

toofab: It must be a totally different beast now than it was then.

Cassandra: Oh my God, it was in the basement of some crappy hotel. I was the only woman. It was all men. It was all guys that traveled in packs of two or three, and it was comics, only comics. And the only reason I was there was because I had this comic that came.

toofab: How different is it for you when you attend as Cassandra vs. Elvira?

Cassandra: It attracts a lot more attention [as Elvira]. Coming in, I was Elvira, that's for damn sure ... but I am doing OK as Cassandra today. I attend a lot of conventions just as myself. It's a lot more comfortable and a lot cooler and I don't have to get up as early. I really like doing that, but, obviously, everyone wants to see Elvira. 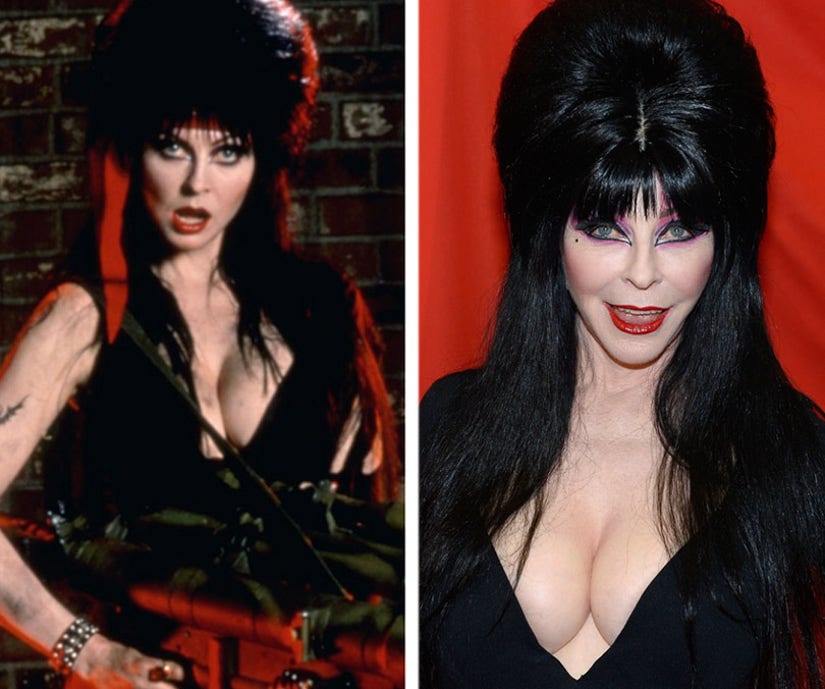 toofab: I'm sure you've seen your fair share of fan tattoos and cosplay over the years. What's one of the more bizarre tributes you've seen?

Cassandra: It's amazing how many tattoos you see. When I see someone with an Elvira tattoo, I take a photo of it. I used to say to people, 'I have over 100 photos,' now it is over one thousand and counting. Sometimes it blows me away where they put them and how big they are, like sometimes people's whole backs. I'm like, 'What about your wife? Your wife doesn't care?' It's weird, but now I'm pretty used to it.

toofab: A lot of people come to see you, but is there anyone you'd like to meet at these conventions?

Cassandra: Oh yeah! Well, I know them all already, but I love seeing the cast of "The Walking Dead." I spend a lot of time hanging out with Michael Cudlitz, Seth Gilliam, they might be the ones I see the most for some reason. It's pretty awesome. I'm still excited to see them.

toofab: And now we have the book coming out, tell us a little about that.

Cassandra: It's huge! I've done over 35 years and it begins with my first photo session. I think I've done more photo sessions than any damn person alive because I've done this for over 35 years. I mean, a lot of people say 'Oh, I do a photo session every week.' It doesn't matter, I've been here longer, so it's funny to see how the character and the look has evolved.

toofab: Do you remember the first photoshoot?

Cassandra: Oh yeah, like it was yesterday. A lot of these I don't even remember doing, but the first one I was like, 'Oh my God.' I couldn't believe it and my hair was super flat. It's funny, it just kept growing and growing every year. I know what year it is by how high my hair is!

It's fun, there are behind the scene things from Elvira's character and sketches of what the first costume looked like before they made it, sketches of other costumes I've had from different T.V shows. There's lots of personal details. It's really interesting and I put a lot of commentary in many of the photo sessions about why it was this way or why it was that way.

Like there's one photo in there where I am in a bathtub, suspended from the ceiling with fire underneath me. They had me in a bathtub because I was seven months pregnant!

I could do three more of these books. I could I'm not kidding.

toofab: Is there one photoshoot that stands out? Other than the first one, because I'm sure that's most memorable.

Cassandra: I don't know, they all start to blur together, but there's this really sexy one that my mother hates. It's semi nude. I have little stories about all of them. So yeah, read the book!

toofab: Does your daughter come with you too conventions like this?

Cassandra: She came to Comic-Con with me from the time she was three years old. She loved it until she was about a teenager and then she was like, 'Ew, no, omg!' She used to have a blast here. I was looking at photos of all of our times at Comic-Con. Now she's pretty much like, you'll do your thing and I'll do mine.

toofab: Has she ever tried putting the costume on?

Cassandra: She never really tried ... she was forced by me to put it on! I have a picture in there, a couple actually, she wasn't even a year old and, of course, we had her in a dress and a wig already. That's probably child abuse, but she had enough by the time she was three years old. She was into to like Harry Potter, like everyone. She was over me, sadly. If you're mom, it doesn't matter what your mom is, you do not want to do what they do or look like them or anything.